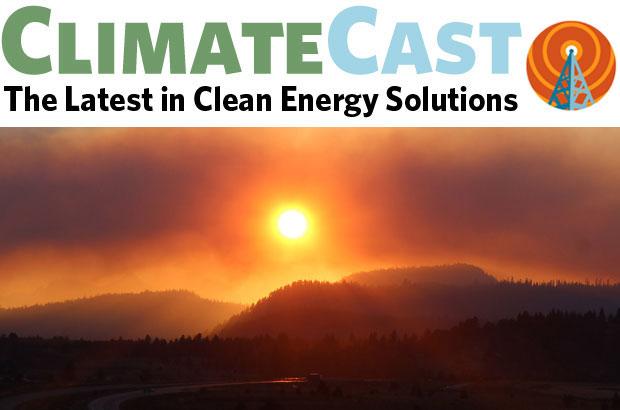 Hope is huge. But is it enough?
Jonathan Lawson
September 8, 2020

The fifteenth anniversary of Hurricane Katrina came last week as another ferocious storm bore down on the Gulf Coast, forcing the evacuation of more than 750,000 people. While large metro areas including Houston dodged what could have been apocalyptic consequences for many, this year’s unusual hurricane season provides more evidence that climate change is an “impact multiplier” for extreme weather events. (Read more: Everything Is Unprecedented. Welcome To Your Hotter Earth)

In California, the words “unprecedented” and “wildfires” seem molten together in all the same sentences these days. UC Santa Barbara professor Leah Stokes reflects on how the summer weeks of heat waves, wildfires and blackouts—amid a pandemic—offer a warning about California’s fossil fuel future.

American oil giant ExxonMobil has been removed from the Dow Jones Industrial Average, reflecting diminishing investor confidence in the fossil fuel sector (Chevron is now the only oil company remaining in the influential index). One issue spooking investors is the industry’s flagrant, often deceptive opposition to climate action. Major investment group Storebrand announced last week that it would become the latest to divest from companies, like Exxon and Chevron, that lobby against the Paris climate accord or other clean energy policies--as well as from companies invested in coal and tar sands.

Meanwhile, America’s biggest oil and gas lobby group is ramping up advertising efforts to persuade voters that fracked gas is a climate-friendly fuel. These PR efforts are taking place on a national scale, but the industry is also taking aim at local pollution-reduction efforts. In Seattle, for example, gas utility Puget Sound Energy used a “sophisticated pushback plan” to defeat a city measure which would have banned gas hookups in new construction. A new study shows that most utilities are choosing to remain committed to fossil fuels despite their mounting climate impacts and the lowering costs of renewables.

We covered some of gas utilities’ clumsier propaganda campaigns in a previous ClimateCast; this leaked campaign guide shows how the industry uses sophisticated advertising techniques to disassociate gas from its adverse health and climate consequences.

Hope in hard times. Is it enough?

Marine biologist and climate leader Ayana Elizabeth Johnson has co-edited a new, solutions-oriented collection of essays and poems by women writers on the climate crisis. In an interview on the book and its theme, she said: "It’s funny to be asked about hope, because one of my mantras is just, f**k hope. Because, honestly, hope is not going to get us there... I’m just like, where’s the plan? Where’s the strategy? What are we going to do that we don’t need hope?"

In Johnson’s view, it's not that hopelessness is preferable to hope—rather that we must not be satisfied with passive hope. We must join our hope with active work: determination, analysis, and concrete collective struggle to change our direction. Hope without struggle is akin to cynicism. And as climate leader KC Golden is fond of observing, cynicism is capitulation.

Check out the new collection of essays, All We Can Save: Truck, Courage and Solutions for the Climate Crisis. Here also is a reading list on the intersection of climate change and racial justice.

High hopes and great expectations: a political shift on climate
Here's your clean energy team for 2021
ClimateCast: A secret antidote to 2020's triple crises?
Paris! we just can't leave you