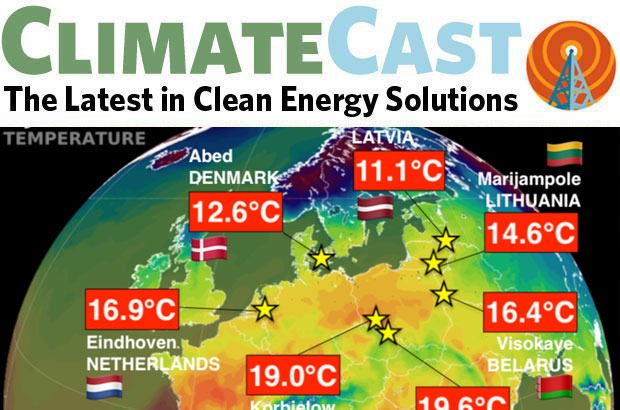 Climate consequences rang in the new year, as record-breaking warm temperatures disrupted the winter in at least seven European countries.The heat wave comes as part of a season of unusual extremes, including massive winter storms that disrupted holiday travel across much of the US, and an atmospheric river threatening dramatic floods across much of California. Note that such extreme weather events may now be par for the course this year as they were in 2022.

New Year’s Day also marked the fruition of some of the effective climate lawmaking that took place in the last couple of years. At the federal level, the Inflation Reduction Act officially went into effect, promising major investments in clean energy both at the large scale of power generation and transmission, and the smaller scale of incentives for household energy retrofits.

And there’s more action happening at the state level. In Washington, both the Climate Commitment Act and the Clean Fuel Standard went into effect Jan. 1. Governor Jay Inslee celebrated the occasion, saying “we have moved, after 10 years of discussion and planning and consideration, to the action phase of building a clean energy economy in the state of Washington to really defeat this beast of climate change.”

Much of the Washington Legislature’s work this coming session will be on follow-through: working out the implementation of the major policies that are now going into effect. “This is where the rubber meets the road,” said Rep. Beth Doglio. “The climate policy framework is in place; now, we have to figure how to make it work.”

Truly, an inflection point in the energy disruption

The phrase “inflection point” has been used often to describe the period we are approaching, or have reached, in responding to the climate crisis by expanding clean energy. President Biden used the phrase this way in 2021. Climate Solutions named the moment as such in 2020, ahead of landmark climate policy successes in both Washington and Oregon in 2021. Expressing much the same sentiment, scientist Leah Stokes recently called 2022 “the beginning of a green transition,” writing that “an energy transition sounds smooth and orderly. But in a year with a brutal war that turned global energy markets upside down, we learned that’s not the way this kind of change will happen. It’s going to be a bumpy ride—an energy disruption.” She continued: “This year, climate progress has been a dance. Rather than two steps forward, one step back, it’s unpredictable and improvisational.”

Recently it’s felt like a few more than two steps forward: A new report by trade group American Clean Power shows clean energy investments soared in a recent three-month period following the Inflation Reduction Act (IRA), and totaling $40 billion and equaling the entire amount invested in 2021. A decade of funding from the IRA is projected to be a massive boon to US clean energy, and anticipated to accelerate US progress on renewable energy and reducing carbon emissions in 2023.

The Pacific Northwest saw its own incredible progress in 2022, with Oregon upping the ante on its clean fuels program; joining Washington and California in advancing zero-emission vehicles; and providing historic levels of investments in clean energy solutions and electric vehicles, as well as significant progress for environmental and social justice. The Washington Legislature’s headline climate accomplishment was the passage of Move Ahead Washington, a nearly $17 billion set of transportation measures. And Washington emerged as a national leader on clean buildings requiring heat pumps for all new commercial and residential buildings.

Following on the heels of the City of Portland, OR becoming the first city in the U.S. to phase out the sale of petroleum diesel by 2030, in late December Oregon and Washington both adopted California’s Advanced Clean Cars II Rule. With both states adopting that rule, all new cars sold in the Pacific Northwest will be zero-emissions as of model year 2035. The Pacific Northwest now joins California to ensure that all new cars on the roads will have zero tailpipe pollution and zero climate pollution up and down the West Coast. Vermont was the first state to follow California’s ZEV rule; Oregon and Washington make the Northwest the first complete region to do so. At least 15 states have now made like commitments, with more soon to follow. Canada announced that it will also align with the California rules. Also helping to cut road emissions: the U.S. Forest Service announced a move to more electric light-duty trucks.

Congressional Republicans are proposing legislation which would require opening up more federal lands to oil exploration, claiming that government rules were keeping the oil and gas industries from producing more and cheaper fuel for American consumers. Environmentalists have fought proposals to lease more land for fossil fuel production. But all of this sturm und drang may be based on false assumptions. Last month, when the U.S. Department of the Interior held an auction of 193 parcels of Alaskan offshore drilling rights, only a single bidder expressed interest in a single parcel. It isn’t government opposition that is keeping oil production on pause; it’s the oil industry’s own disinterest in investing. Lesson: there’s already plenty, in fact too much, of federal land available for fossil fuel exploration.

Get ready for this year’s legislative season: become a Climate Solutions Super Advocate! We use our Super Advocates contact list to alert our most active advocates when an urgent climate action response is needed.