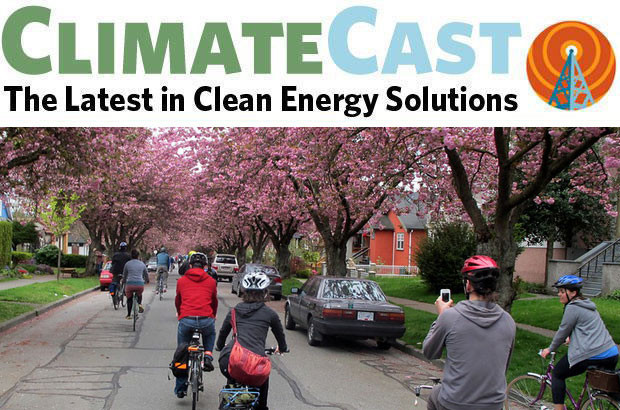 In the Northwest, incremental progress on clean energy

Both Oregon and Washington have now concluded their 2022 legislative sessions. Lawmakers in both states considered bills focused on clean transportation, clean buildings, growing the clean energy economy, and planning for climate resilience. The Washington Legislature’s headline climate accomplishment was the passage of Move Ahead Washington, a nearly $17 billion set of transportation measures. The package includes historic levels of investment in transit, bike/pedestrian infrastructure and safety measures, and vehicle electrification; these projects will be funded by carbon pricing revenues from last year’s Climate Commitment Act. Road maintenance and construction accounts for the largest part of the package, expenditures which earned some criticism.

Overall, legislators achieved mixed results for climate action in Washington. Legislators failed to pass several bills aiming to clean up emissions from the buildings sector, due to opposition from the fossil fuel industry, and vehicle electrification efforts fell short of what some advocates were pushing for. One example: a missed opportunity to start electrifying the diesel drayage vehicles that move shipping containers through the Port of Seattle; air pollution from these vehicles creates significant health hazards for nearby communities. Legislators succeeded in passing a bill to reduce methane emissions from landfills, and a measure reforming the siting and permitting process for clean energy infrastructure.

In Oregon, legislators succeeded in passing a $100M Climate Resilience Budget that will invest in solar energy, vehicle electrification infrastructure and EV rebates, home energy efficiency retrofits for low income Oregonians, and emergency heat relief programs for vulnerable communities (including electric heat pumps). Other climate accomplishments this year include the creation of a REBuilding Task Force which will recommend ways to increase building efficiency and resilience statewide.

Shortly after the end of Oregon’s legislative session came the second anniversary of Governor Kate Brown’s landmark Oregon Clean Action Plan, which established binding targets for emissions reduction and environmental justice priorities, and bolstered state programs to help achieve those goals. Marking the occasion, the OCAP’s multi-sector review committee issued a report noting the state’s progress, but also responding to recent, alarming climate scientific reports with a call for greater action: “even with current policies, Oregon is not meeting the level of climate progress needed or envisioned.”

An undeniable connection: fossil fuels and the Ukraine humanitarian crisis

The Russian military continues to bombard Ukrainian cities, causing a massive humanitarian crisis; other nations are mobilizing sanctions and fielding relief efforts. In the U.S., climate-concerned observers and the fossil fuel industry have established their own battle lines for interpreting and responding to the crisis. “It’s a crude oversimplification to call this a fossil fuel war,” said energy policy expert Jonathan Elkind, referring to comments made by Ukrainian climate scientist Svitlana Krekovska. “But it’s undeniable that Russia gets significant revenues from oil and gas and that America’s gasoline habit contributes to the global demand for 100m barrels of oil each day.”

Ukrainian activists as well as Russian human rights activists have long called for an end to purchasing fossil fuels from Russia, feeding its militarism through oil and gas revenues. Now, more in the U.S. are following suit. However, amid public calls for banning the import of Russian fuels (which President Biden did on March 8th), American oil and gas companies are vigorously taking advantage of the situation by pushing for a drilling free-for-all—arguing that increasing domestic production is the only way to lower skyrocketing gas prices and to achieve energy independence (neither of these arguments hold water). The short-term jump in oil prices has been a bonanza for fossil fuel companies and for some opportunistic CEOs.

Most congressional Republicans, some Democrats, and some Biden administration officials seem to have adopted much of the fossil fuel industry’s messaging (predictably, West Virginia Senator Joe Manchin is stepping up as the industry’s most brazen messenger). Even the regular EV proponent U.S. Energy Secretary Jennifer Granholm told oil producers, at a recent industry conference in Houston, that “we need U.S. oil and gas production to rise to meet current demand… we are serious about decarbonizing while providing reliable enegy that doesn’t depend on foreign adversaries.” The Senate remains deadlocked on clean energy legislation. However, an increasing number of voices, including newspaper editorial boards, elected officials and others, continue to insist that transitioning to a non-fossil fuel based energy system is the only sensible economic response to the Ukraine crisis.

The Environmental Protection Agency has proposed new rules limiting tailpipe pollution from large vehicles including heavy trucks and buses, the first time in 20 years these limits have been adjusted at the federal level. The agency also restored California’s authority to set its own vehicle emissions standards, reversing a Trump-era prohibition.

When the COVID epidemic caused global emissions of climate pollution to drop in 2020, observers warned that the levels would likely rebound hard once economies began to recover. That is happening now with a vengeance. According to the International Energy Agency, coal and gas power generation caused global CO2 emissions to jump last year by more than 2 billion tons, their largest ever annual rise.

Scientists reviewing satellite images of the Amazon basin are warning that the vast rainforest may be nearing a “tipping point,” beyond which that region could transform into a much drier savannah ecosystem—dramatically reducing its ability to moderate global CO2 levels.

The United States is failing to meet its obligations to invest in global climate response, including pledges made by President Biden as well as by previous administrations. Current spending is “pitifully too low,” according to the Natural Resources Defense Council, thanks in part to political roadblocks to climate action in the Senate.

In Vancouver, BC, the Tyee issued a special report examining the health impacts of last summer’s climate change-fueled heat dome, and detailing the steps that led to hundreds of deaths in the Northwest. The tragedy revealed the need for better local climate resilience measures, both in emergency response capacity and in building codes that anticipate life-threatening heat events.

The Ukraine crisis—sadly one of numerous humanitarian crises around the world—has created the urgent need for donated assistance. Razom Emergency Response is a Ukrainian-American led charitable organization gathering funds for immediate emergency medical response in Ukraine. If you are able, please support them or other organizations providing support for victims of war and displacement.