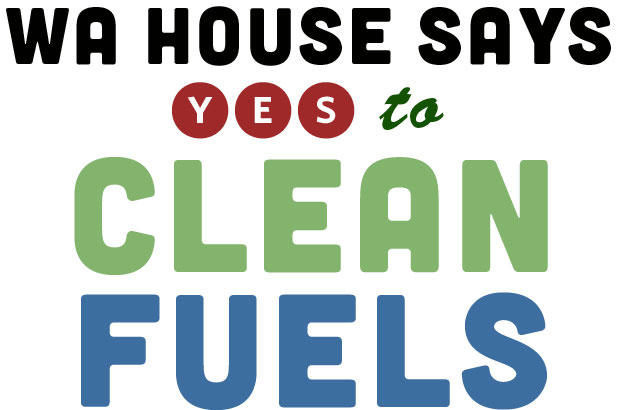 “The house is on fire and it’s our house”: Momentum for clean fuels for Washington grows
Stephanie Noren
January 30, 2020

Olympia, WA -- The Washington State Legislature’s effort to enact a statewide Clean Fuel Standard resumed in 2020 with the House of Representatives  passing  HB 1110 (Clean Fuel Standard) by a vote of 52-44.   This is the second time the House chamber has voted in support of the policy, as they also considered and voted to pass it last session. The Senate now takes up the policy, where pressure mounts for the chamber to pass major climate legislation this session.

Rep. Fitzgibbon (LD-34), the bill’s primary sponsor, opened the floor debate stating, “This bill is a big step forward, for us to tackle the hardest, largest sources of greenhouse gas emissions in our state, and that is from transportation. The people who are harmed most by that pollution are the people who live closest to the highways. This policy has worked for our neighbors and it can work for us.”

Strong support for enacting a statewide Clean Fuel Standard was clear with numerous representatives speaking in strong support of the policy for a variety of reasons.  Floor statements covered a wide range of topics, including the need to act on climate change and address transportation emissions; cleaner air and improvements to public health; increased investment in local and rural economic development, renewable fuels; and the urgency of building a healthy, livable future for all Washingtonians.

Business support is growing with over 60 businesses statewide endorsing a Clean Fuel Standard in Washington. Notably, Alaska Airlines and the Port of Seattle support a Clean Fuel Standard in Washington as a way to accelerate development of cleaner choices for the airline industry. This support follows recent resolutions passed by the cities of Spokane, Issaquah, Bainbridge Island, and Tacoma in support of clean fuels, as well as a signed letter of more than 125 current and former city, county, and port elected officials urging the Legislature to adopt a clean fuels policy.

“The Clean Fuels bill is about jobs, not just the environment,” Rep. Chapman (LD-24) stated speaking in support of House passage. “In Grays Harbor, REG is virtually the largest manufactured or renewable biodiesel, producing 100 million gallons a day. Ninety percent of that leaves the state. They’d love to expand, and to continue creating jobs, if there were more demand here for their product. This could be the game changer for the North Olympic Peninsula.”

The greatest threat to global health in the 21st century

Transportation pollution is Washington State’s largest source of air pollution linked to asthma, lung cancer, and other respiratory diseases. Burning fossil fuels releases various kinds of particulate matter and pollution in the air, including microscopic, ultrafine particles so small that they get deep into our lungs and bloodstream. This pollution causes serious health problems, like premature death in people with heart or lung disease, aggravated asthma, decreased lung function, increased coughing and difficulty breathing.

“I represent the people that live next to the airport and there are significant health impacts from airport pollution -- respiratory, cardiac problems, brain disease,” Rep. Orwall (LD-33) noted as she spoke on the House floor in support of the policy. “My son kept getting sick with asthma when he was young, and I never realized that it could be due to the school being near lots of transportation pollution.  The health of our kids is priceless, and we have this opportunity for changing our fuels to more clean, sustainable biofuels and creating jobs here.”

The American Lung Association, the Washington Academy of Family Physicians, and the Washington State Medical Association see a Clean Fuel Standard as one of the most important ways to improve public health by decreasing sources of air pollution. At the national and global level, an increasing number of health organizations list climate change and air pollution emissions as a severe threat to public health.

A Clean Fuel Standard requires oil producers and refiners to reduce the carbon intensity of gasoline and diesel or invest in cleaner fuels, providing consumers with cleaner-burning transportation fuels such as electricity. Washingtonians spend over $9 billion annually on mostly imported gasoline and diesel, while many locally-produced clean fuels are shipped to other markets with working Clean Fuel Standard policies in place, including Oregon, California, and British Columbia. Requiring cleaner fuels and electricity for transportation is the baseline for creating pathways toward cleaner transportation options, such as adding electric vehicle infrastructure, exploring electric vehicle car sharing programs, and promoting investments in renewable clean biodiesel and renewable natural bio-gas.

In addition to HB 1110, the Washington Legislature is considering several critical policies this session to address climate change, including the following bills endorsed by the Environmental Priorities Coalition: Buy Clean Buy Fair (HB 2744), Transportation for All (HB 2688/SB 6398), and Zero-Emissions Vehicles (HB 1999/SB 5811) as well as a needed Climate Pollution Limits (HB 2311/SB 6272) update to the goals the state sets for reducing carbon pollution.

Prior to Climate Solutions, Stephanie worked for Cascadia Consulting Group, the City of Spokane, a national waste industry professional association, and a Boston-based waste technology startup. She has a degree in Sociology from Gonzaga University and spends her spare time reading, cooking, drinking coffee, spending time with the Byrd, and chasing park bunnies in Seattle.