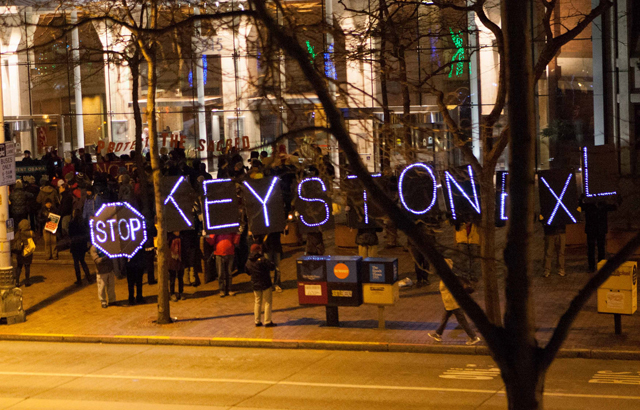 This article was first published in Crosscut.

The historic climate change agreement between the U.S. and China this week cleared the biggest obstacle to a strong global agreement at the Paris Climate Summit next year. China agreed for the first time to begin reducing its absolute emissions no later than 2030, not soon enough, and yet still a critical milestone for the world’s most populous nation and biggest emissions-growth engine. For its part, the U.S. agreed to accelerate its emission reduction efforts between now and 2025, cutting climate pollution by more than a quarter of its 2005 level. Again, not enough by any credible standard of scientific evidence or moral necessity. And yet, a majorstep forward.

It’s this kind of qualified huzzah that makes it hard to wrap our minds around the climate challenge. We live in an enormous gap between the scale of the necessary response and the scale of the response that we consider “politically possible.” And so this US-China deal is both a huge breakthrough (with respect to politics as usual) and an insufficient commitment (with respect to the actual physics of saving ourselves.)

OK, so having drizzled a little obligatory, cold reality on the party, go ahead and celebrate. Smell the hope! Because this is really a very big, very good deal. Here's why:

For starters, fellow Cascadians, the deal is yet another indication that exporting Montana coal through Northwest ports to boil the water that drives the turbines in China to make the rubber duckies that we buy and thus undermine the US manufacturing economy is a phenomenally bad idea and a terrible investment.

The deal also suggests that the president will stick to his guns and implement the Clean Power Plan, which will substantially lower emissions from the U.S. electric power sector.

The deal shows that Democrats — like deal architects Secretary of State John Kerry and top Obama aide and prospective Clinton campaign chief John Podesta — have figured out that standing up to the fossil fuel industry and delivering real solutions is good politics.  (It turns out that people, especially the “rising” but depressed electorate, actually prefer planet Earth to planet Toast by very wide margins!)

The US-China deal, coming on the heels of the enormous People’s Climate March mobilization last month, also shows that the swelling global climate movement is starting to change the game. And it clears the global palate from the bitter taste of humanity’s collective failure to seal a strong climate deal at the last major summit in Copenhagen in 2009.

Finally, the U.S.-China deal means that next year's Paris Summit has a fighting chance to “make,” not “break” the livable world our kids deserve.

So take heart. I mean it.

But watch your back. Because next week the U.S. Senate plans to vote on a bill to approve the Keystone XL Pipeline. Ironically, the motivation appears to be a desperate attempt to help Sen. Mary Landrieu, a Louisiana Democrat, keep her seat in a runoff election against Bill Cassidy, the guy who wrote the bill approving Keystone in the House, the very same Bill that Landrieu wants the Senate to pass!

Landrieu is likely to lose the election anyway. This desperate attempt to claw her way back by passing her opponents’ bill might suggest why voters see her as something less than a model of strength and integrity. By joining Republicans and caving to oil, Democrats would win exactly nothing politically, while showing their willingness to make themselves indistinguishable from the opposition if that’s what it takes to win … or even just to lose by a little less. And they wonder why voters stay home.

Worse, by caving on Keystone, Democrats would step all over the fledgling hopes stirred by the US-China deal.

Approving a huge, capital-intensive project that would lock in emissions from the notoriously filthy Canadian tar sands is the surest possible way to undermine the world’s tentative belief that the U.S. might finally be getting with the global program for climate solutions. It would be exactly the kind of shenanigans that keeps the rising, pro-climate electorate away from the polls.  And it would violate a core principle for responsible climate action:  If we’re serious about making it better, we have to stop making it worse.