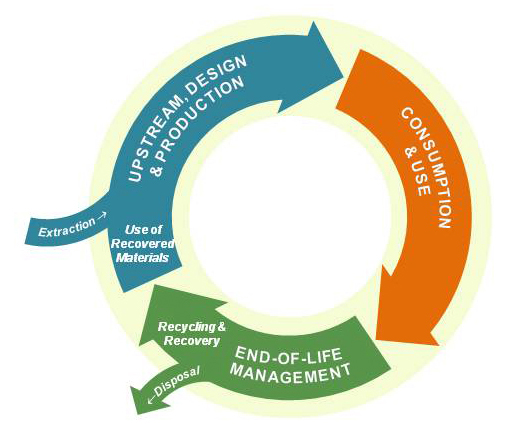 The BioCycle Conference in Portland April 16-19 focused on the new economics of materials and natural services – harnessing organic wastes with processes that make valuable goods, and valuing ecological services to send the right signals on the use of nature in general.  Here are a few nuggets I drew from the conference:

Take nature into account – Before the 1930s the macroeconomy was statistically invisible, Earth Economics Chief Economist David Batker noted.  Such common figures as gross domestic product and unemployment were simply not measured.  So President Herbert Hoover could say the depression was over when a large part of the nation was unemployed.  Today the value of natural capital is similarly invisible, he added.

Batker illustrated this with the example of Louisiana wetlands which provide hurricane protection to New Orleans. Deteriorating under human impacts, the delta wetlands are losing this capacity.  That is connected to the $200 billion cost of Hurricane Katrina.  The annual natural services value of the delta is $12-$47 billion annually, with an asset value of $370-$1,300 billion. BP by contrast is valued at $70-120 billion.

Batker noted an example closer to home, accounting practices which do not let Seattle and Portland count the full natural services value of watersheds in filtering water supplies.  On the asset sheet, a large facility built to filter water would be fully valued, but the filtering service of the watershed cannot be counted. The cities are seeking permission from the Governmental Accounting Standards Board to value the watershed’s filtering service.  This will allow the cities to finance watershed improvements such as road removal.

Biofertilizer development needed – “The act of producing food is in itself harmful to the soil,” because food production inherently takes carbon and nutrients from the soil and ships it to urban areas, said Chad Kruger, director of Washington State University Center on Sustaining Agriculture and Natural Resources. So lost carbon and nutrients must be replaced by fertilizers, which are substantially from mineral sources. Kruger noted that mined phosphorus is projected to peak in coming decades. Rising costs of natural gas-based fertilizers are driving significantly increased use of composts from manure in the Columbia Basin over the past five years.

Organic composts are key to increasing carbon storage in farm soils, Kruger added.  But biofertilizers have inconsistent performance which must be resolved.  Kruger called for development of “drop-in” biofertilizers that can consistently be used alongside fossil-based fertilizers.

Materials key to solving climate – Dennis McLerran, administration of U.S. Environmental Protection Agency Region 10, described himself as a biodigester “nerd,” and lauded work going on to drive forward biodigester adoption in the US.  “Here in the west the waste-to-resources trend is already producing markets.”  “What stands in the way of biogas is an undeveloped market that does not take into the account the externalities of fossil fuels.”   Reducing emissions from materials is “the environmental work of the 21st century.”  “Materials management is the smartest work on climate change.”

Oregon looking at full materials lifecycle –David Allaway, waste prevention specialist at Oregon Department of Environmental Quality sliced the typical pie chart of greenhouse gas emission sources in a new way – tallying up all emissions that trace back to materials production, use and disposal – and found materials make up 42 percent of the emissions pie!  Total recovery of discards in recycling and composting would only reduce total greenhouse emissions six percent.   So Oregon is looking at a more comprehensive approach taking into account the full lifecycle of materials beginning with production.  It is reviewed in the 2050 Vision for Materials Management in Oregon.