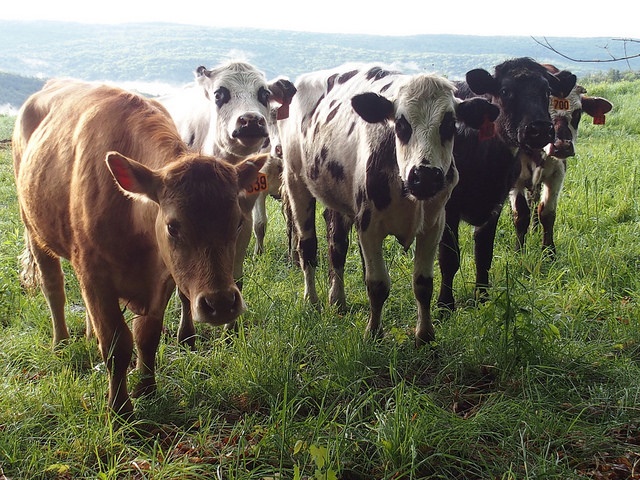 PUTNEYPICS
Tags
biocarbon
Guest Blog: More livestock to save the planet?
Chad Kruger an…
May 10, 2013

A conversation between Chad Kruger, Director of  WSU Center for Sustaining Agriculture and Natural Resources, and Allan Savory, President and Co-Founder of the Savory Institute

Fight climate change by adding more livestock to the land?  Not surprisingly, that is a controversial proposition.

If done right, however, Allan Savory claims in his recent TED talk,  which has garnered over 1 million views, that increasing livestock herds on arid grasslands and managing them to better mimic nature’s wild grazing herds can have an enormous climate benefit.  In fact, he claims in his talk:

“…if we do what I am showing you here, we can take enough carbon out of the atmosphere and safely store it in the grassland soils for thousands of years, and if we just do that on about half the world’s grasslands… we can take us back to pre-industrial levels (of CO2 in the atmosphere) while feeding people.”

Recently, we featured a guest blog from Chad Kruger, director of WSU’s Center for Sustaining Agriculture and Natural Resources (and a NBI Advisor), which probed the evidence to support claims Savory makes about his approach, which he calls Holistic Management (HM).  Since that time there’s been a lively online dialogue between Chad and Allan Savory.

Since many of Savory’s overriding goals are very much in line with the Northwest Biocarbon Initiative -- to ally with nature to suck excess CO2 from the atmosphere, and to do it in ways that have many benefits – we decided to repost excerpts from their fascinating conversation now:

Allan Savory: Chad I appreciated you attending my talk – thanks. Your struggle to understand is natural in a paradigm shifting situation.  There is a mass of peer -reviewed support & I suggest you connect with Andre Malmburg through the Savory Institute…  Nothing in holistic planned grazing is anecdotal. All of the process is based on solid science. For nearly 50 years I have appealed to any scientist to simply point to a single aspect not based on solid good science as opposed to the deep beliefs and myths that range science is founded upon… Once again I do appreciate your open-mindedness and trying to understand… This is nothing but a paradigm paralysis problem. Thankfully for humanity the tide is turning. I look forward to your take on my philosophical ideas.

Chad Kruger: I have no question that there is strong scientific support for HM… I followed the reference to Weber and Gokhale 2011 and found EXACTLY the kind of study that is needed to be able to start piecing together an empirical picture that is scientifically defensible.  In spite of the limitations, they were able to conclude from this experiment (using a reductionist approach) that there were statistically meaningful differences in grazing treatments on a single variable (soil water content). It’s certainly not an end-all debate study, but it’s a building block of empirical data that provides meaningful support for HM. We’ve run into this challenge in much of our work on climate change and carbon management in agro-ecosystems … the solid scientific theory / principles / concepts don’t always align themselves cleanly with the experimental record. This hasn’t caused us to reject theory or empirical data – but rather to wrestle with the question of “why they don’t align better” — and ultimately to work on finding a different and better approach to the science.  Therefore, much of our work trying to understand the impacts of management and environment in complex agro-ecosystems is dependent on a coordinated scientific approach that uses [holistic] process modeling AND [reductionist] experiments.  Reductionist vs. Holistic? It’s not an either-or, but a both-and … in compliment with each other. And, I agree with you that the holistic context needs to come first – otherwise the experiment will be designed and implemented wrong.

Allan Savory: Chad I appreciate your explanation and fully understand the difficulty of the experimental approach. When factors are isolated for study it leads to studying less than the whole and entirely wrong conclusions…I have just returned from Patagonia – some wonderful results with up to 25,000 sheep in one flock and a well documented 50% increase in land performance (production of vegetation) in the first year. However no attempt to isolate anything but simply monitor what happens when ranchers do manage holistically.  I think we are getting there albeit slowly – accepting that holistic management works, is based on solid scientific principles but that some people still want to see a lot more data concerning results that have to be gathered case by case because no grazing plan can ever be replicated, every one is totally unique and is also unique every year – as is every family, ranch, pastoral community and economy in which they are involved. There is an urgency in this because the quicker we can gather the data the faster we can move to save ranch families, stop the appalling cultural genocide taking place in Africa, Israel, Afghanistan, Pakistan, etc and address desertification’s major role in climate change that is all being held up by people casting doubts based on false perceptions.

Chad Kruger:  We need science that validates that the management actions we invest in will actually result in the desired improvements we hope to see. It can also be frustrating when the science falls behind the management and we don’t know whether we’re doing the right thing or not.  The key to the “we need more data” point is that if we are going to make major investments as a society in a mitigation strategy – we are by definition NOT choosing another strategy. In the absence of rigorous analysis (particularly of unintended consequences and variables we don’t understand), we have often made the WRONG decision. This is, at it’s heart, precisely what Allan’s HM framework is all about — a process to evaluate decision-making with the goal in mind. No matter how good your process, if you don’t have a rigorous scientific evaluation, you are still just guessing that you are right.  I suggest that moving forward with Allan’s ideas around management is likely warranted in spite of the lack of scientifically conclusive quantification. However, if we’re talking about investing significant societal resources into “one solution”, we need to have a really high degree of scientific certainty about that solution.

After working with a number of scientific colleague over the past decade trying to defensibly quantity carbon mitigation in cropping systems (which are simpler than grazing systems), we’re just now getting to the point that we have some certainty over the relative magnitude of the change we can affect. And that relative magnitude is much smaller (an order of magnitude) than earlier and more crude estimates indicated.

Allan Savory:  I have for many years pleaded with academic critics to produce either any logical flaw or scientific flaw in either the holistic framework or it’s holistic planned grazing used when livestock are involved in the management. That said, I do feel and believe that we have almost all of the scientific knowledge that we need (although we can and should keep improving it) to begin producing more food than eroding soil on the world’s croplands (and US croplands).

The science supporting any management needs to be rigorous. Where people are getting confused is in confusing the science with the management… And they find management using the holistic framework hard to comprehend. People calling for or challenging the ‘science’ is entirely a paradigm paralysis problem – anyone understanding the change brought in by the two main processes that are together called Holistic Management would not do so.  Both processes currently used in holistic management use nothing but sound scientific principles and laws as we know them today, as well as knowledge from other sources and professions never studied by narrowly trained specialists in for example range science or economics.

This is a very abbreviated version of their dialogue. See Chad’s original post here, where it appeared first at the Center for Sustaining Agriculture and Natural Resources site.  It is followed by their full comments.

Guest Blog: More livestock to save the planet?

Chad Kruger is Director of  WSU Center for Sustaining Agriculture and Natural Resources and an Advisor to the Northwest Biocarbon Initiative.

Allan Savory is President and Co-Founder of the Savory Institute.