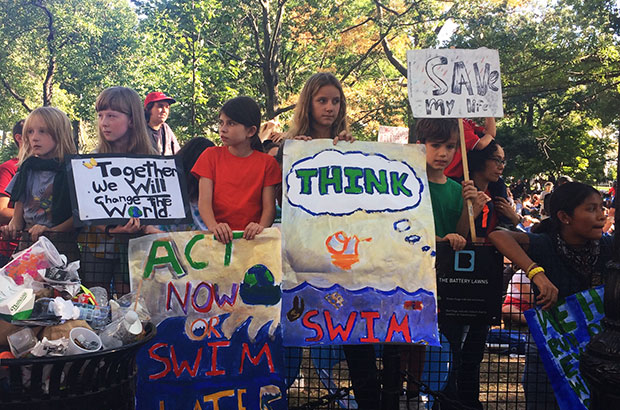 IVY JAGUZNY
How I Was Swept Up in a Climate Revolution
Ivy Jaguzny
September 27, 2019

Seattle Public schools didn’t excuse students for the largest climate mobilization in U.S history. So last Friday, I took an unexcused absence to take part in the Global Climate Strike in New York City. Hundreds of thousands of youth took to the streets demanding climate justice (New York public schools released all of the city’s students to join the Sept. 20 events, which also fell on the 2nd anniversary of Hurricane Maria).

Organized and led by youth in the Climate Strike Coalition, the demonstrations kicked off a week of sustained international actions to call for transformative changes to climate policy. The coalition released a set of policy demands ahead of the strike, calling for transformative climate action. That statement marked the first time that such a broad coalition of youth groups has aligned behind a Green New Deal. The demands include a strong focus on protecting people, saving indigenous land, helping frontline communities, and supporting a just transition. I became involved in the youth coalition through one of its member organizations, Zero Hour , an international youth led climate justice organization focused on centering the voices of frontline youth. I serve on the communications team, working behind the scenes to land media coverage for youth activists living all over the U.S.

Before my trip to New York, I had never travelled alone, and didn’t have a clue how subways worked. But I felt a strong need to take part, and support the leaders of this movement. I begged my mom to let me skip school and spend my measly savings on a trip to New York. I stayed with Zero Hour’s communications director, Isabella Fallahi, in the house of our deputy director and New York organizer Natalie Sweet.

The night before the strike was a whirl of excitement and preparation, from nighttime canvassing on the streets and in the subway, a trip to Staples for supplies, to sign making and speech preparation. I sat with Isabella on the phone until 2 am talking with Kevin Patel, our former deputy partnerships director, making last minute edits to their speech that over 300,000 people would hear the next day (below is a recording of that speech!). .

Being the typical teenagers we are, our late night caused us to sleep through all our alarms. Isabella and I woke up at 11 am in a panic; we needed to be in the 2nd row of the march that started at noon. We barely had time to brush our teeth, and rushed to the subway station, unfinished sign in hand, getting caught in the turnstile. To outsiders we probably did not look like leaders of a climate revolution! I finished my sign on the ground of the subway car, elderly ladies nodding approvingly at my strong language.

We stepped out onto the platform a few blocks away from Foley Square, the crowd already so dense we could barely move—resulting in spots of red paint all over my clothes and unfortunate passersby. By some miracle we met up with a friend, another organizer and a Bronx native who took our hands and fought us through the waves of people all the way to the front of the march. Isabella wheezing from asthma, we squeezed in position behind a banner next to NYC organizers and other youth leaders like Xiuhtezcatl Martinez and Alexandria Villasenor. We took our place among the masses chanting “We vote next!, “Sea levels are rising and so are we!,” and “our people and planet are under attack! What do we do? Stand up fight back!” As I shuffled among my generation, I sang our song, the strike song, and I thought, ‘This is what a revolution looks like.”

Earth Guardians trains diverse youth to be effective leaders in the environmental, climate and social justice movements. Through the power of art, music, storytelling, civic engagement, and legal action, they’re creating impactful solutions to some of the most critical issues we face as a global community.

Future Coalition is a national network and community for youth-led organizations and youth leaders. The Future Coalition works collaboratively to share resources and ideas, all with a common goal of making the future a better, safer, and more just place for everyone.

International Indigenous Youth Council seeks to organize youth through education, spiritual practices and civic engagement to create positive change in our communities. Through action and ceremony, the IIYC commits to building a sustainable future for the next seven generations.

US Youth Climate Strike is a youth-led movement that helped organize over 424 student strikes occurring in at least 45 states on March 15, 2019.

Zero Hour is an intersectional movement around climate change. In 2018, Zero Hour organized the first official Youth Climate March in 25 cities around the world and laid the groundwork for the climate strike movement. In July 2019, Zero Hour hosted the Youth Climate Summit, a weekend-long summit featuring 350 attendees from across the world participating in workshops and programs to enhance their advocacy in the fight for climate justice. 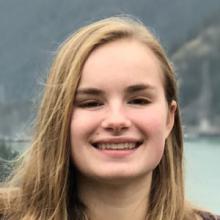 Ivy Jaguzny is an 18-year-old organizer based in Seattle who is fighting for her generation’s right to a livable planet. She serves as the Press Lead of Zero Hour, and served as the youth co-chair of the Earth Day Strike Communications Committee. Ivy advocates for far-reaching climate action and a just transition through activism, civic engagement, and scientific leadership.