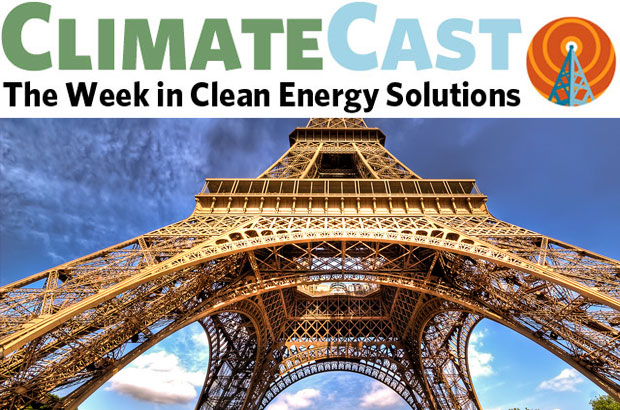 President Obama’s veto of a congressional bill that would have preempted his review of the Keystone XL pipeline (not the pipeline itself) prompted Michael Bloomberg to suggest that Obama use his ultimate decision on the pipeline as leverage to negotiate a broad climate deal that would more than offset the pipeline’s emissions impact, a suggestion the White House and environmentalists  strongly rejected but some found helpful and pragmatic. The Keystone pipeline trajectory shows a significant shift in US climate politics and how climate activists successfully deployed a “supply side” strategy to keep fossil fuels from being extracted or burned in order to prevent the planet’s temperature from rising by more than 2 degrees.

A report by the National Bank of Abu Dhabi concludes that even at $10/barrel for oil and $5/mmbtu for gas, fossil fuels can no longer compete with solar on price and predicts that nearly all future energy investment will be in renewable energy, a forecast in sync with a German think tank’s finding that solar power will become the cheapest source of energy in the coming decade. It would appear that Google read these reports, as the technology giant put $300 million toward a SolarCity Corp. $750 million fund, the largest ever created, to finance 25,000 residential solar projects, and Google’s largest renewable energy investment to date. These kinds of alliances could pose potential threats to utilities, according to utility industry analysts.

Ocean acidity, which has already cost Pacific Northwest oyster farmers nearly $110 million, is anticipated to increase rapidly in the coming decades in 16 out of 23 American coastal areas, threatening the $1 billion shellfish industry, according to the first nationwide study on the impacts of acidification on shellfish production. Warming waters were also linked to coral disease in the Atlantic Ocean, while drought in California means less flowing water and more pools of standing water increasing the breeding habitat for mosquito that carry the West Nile Virus. Decreasing river flow on the Colorado River will require revolutionary changes in behavior in the Southwest.

Divestment rumblings across the globe

Harvard University students brought suit and celebrity alumni signed an open letter calling upon the nation’s oldest university to divest its $36 billion endowment from fossil fuels, while faculty submitted a divestment petition to Williams College’s president and trustees. In the nation’s seventh largest energy producing state, University of Colorado students petitioned to divest their school’s $2.7 billion endowment. On the other side of the Atlantic, over 200,000 Danish lawyers, engineers, and academics will vote in April on divesting their €32bn (£23bn) pension funds, and 50 academics signed an open letter calling for Edinburgh University to divest its £230m endowment fund.

In addition to suing the government to contest President Obama’s Clean Power Plan, states such as Utah, Kentucky, Virginia, and Pennsylvania legislatures are hard at work on legislation that would grant their states the power to veto any carbon emission reduction plans under the Plan, while others (West Virginia, Montana, and Minnesota) would require state sign-off on any reduction plan. Meanwhile, chemical, plastics, steel, and other manufacturers not regulated under the Plan warn they will take their work offshore if the regulations hurt their bottom lines, while the EPA says it is “looking closely” at utility company concerns about complying with the regulations.

A Scottish company creates bio-butanol from waste products associated with Scotland’s £4 billion-a-year whiskey industry; a British company opens a manufacturing plant capable of turning 130 tons of coffee waste a day into fuel; and anaerobic digesting of cow manure in California’s San Joaquin Valley both produces a clean biofuel and handles an expensive waste problem for the region. Researchers at the University of California, Riverside invent a technology that reduces the number of enzymes required to break down feedstocks used to make biofuels, which could cut the cost of biofuels production by 30 percent.

Coal consumption in China dropped 2.9 percent in 2014 and the country could well hit peak coal usage in advance of its 2020 deadline for capping coal. China accounts for half the world’s imported coal, thus its decreased coal demand could mean investors should consider whether to remain invested in coal. China’s goal to increase the share of renewable energy to 15 percent by 2020 caused a surge in production of wind turbines and solar panels. A self-funded 104-minute documentary on smog produced by a former Chinese television reporter riveted millions of her countrymen, suggesting comparisons to Rachel Carson’s Silent Spring, which awakened Americans chemical pollution danger.

Two vertical axis wind turbines capable of delivering 10,000 kilowatt-hours of electricity annually were installed on the Eiffel Tower as part of a major energy retrofit renovation project for the iconic landmark. The power generated would be enough energy for the commercial areas on the tower’s first floor. While the Eiffel Tower’s installation is largely symbolic, Jordan’s plan to outfit 6,000 mosques with rooftop solar will play an important part in the country’s effort to obtain at least 10 percent of its energy from renewable sources by 2020. Jordan imports more than 90 percent of its energy in fossil fuels, which accounts for more than 40 percent of the country’s budget.