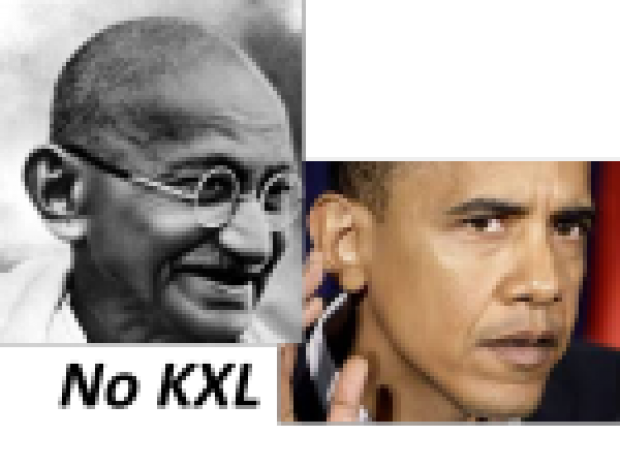 Cross-posted from Getting a Grip

“We must be the change we wish to see in the world.”

This has always struck me as philosophically deep but – with due reverence for the Mahatma – a little hokey as a theory of change. I guess I’m just not evolved enough to know what it means to “be” the demise of the Koch Brothers’ stranglehold on democracy.

But now, in the FEIS on Keystone XL, we have mathematical and economic proof that Gandhi was right.

Here’s how it works:

The argument that Keystone XL will have no meaningful impact on emissions rests on the presumption that the tar sands will be mined and burned, regardless of whether the pipeline is built. But as our foremost climatologists have repeatedly warned, the tar sands are one of the major carbon pools that must remain substantially unburned if we are to avoid catastrophic climate disruption. So conceding that they will be burned isn’t just an analytical assumption. It’s capitulation.

It’s the oil industry saying “Resistance is futile,” and the State Department saying “Yeah, I guess you’re right. Sorry for the hassle.” (Oh, and in addition to being weak, cowardly, and irresponsible, it’s demonstrably false.)

But if you untwist the fatalistic premise of the FEIS, it actually does wind its way around to a useful conclusion: It acknowledges that the pipeline would dramatically increase tar sands extraction and therefore emissions if oil prices were relatively low.

“Oil sands production is expected to be most sensitive to increased transport costs in a range of prices around $65 to 75 per barrel. Assuming prices fell in this range, higher transportation costs could have a substantial impact on oil sands production levels—possibly in excess of the capacity of the proposed Project—because many in situ projects are estimated to break even around these levels. Prices below this range would challenge the supply costs of many projects, regardless of pipeline constraints, but higher transport costs could further curtail production.”

So, in a low-oil price scenario, Keystone XL would fail the President’s climate test[i]. And why would oil prices be low? Because (says my Econ 101 prof) demand would be low; we’d be using less and emissions would go down. Oil producers wouldn’t be able to charge so much, because we’d need less of their stuff. A low oil-price world is a low carbon world[ii]. And a low carbon world is the only one fit for human survival – the only future we can choose if, in Jim Hansen’s immortal phrase, “humanity wishes to preserve a planet similar to that on which civilization developed and to which life on Earth is adapted.”

Think about it this way: On planet Earth, Keystone XL would have a huge climate impact. If we allow ourselves to continue to be bullied into a high-oil-price, high-carbon world, then the impact would be less, because we’d be completely screwed either way. But that world would be so radically and violently transformed that we’d have to give it a different name. Say, planet Toast.

Before we complete our journey back to the common sense conclusion that we have to stop digging this hole deeper, one more slug of economic analysis:

In a report prepared for the Norwegian Ministry of the Environment, Rystad Energy analyzed how much oil and other fossil fuels would have to remain unburned in order for the world to avoid dangerous, irreversible climate disruption (using the 2 degree C. increase accepted by scientists and the international community as the outside limit.) They then calculated the oil price corresponding to the maximum oil demand that is consistent with those limits: $72 per barrel – low enough, according to the FEIS, that Keystone XL would flunk the President’s climate test.

The epic FEIS contains plenty of other evidence confirming the obvious conclusion: a giant pipeline for particularly carbon-intensive fuel could well be a climate problem. (Go figure.)

But the fact that may be of greatest relevance to the President’s ultimate decision is this: In a low oil price world – a low carbon world, a livable world, planet Earth – the economic analysis clearly shows that Keystone XL is a climate disaster. So our choices are these: either we build this low carbon future, or we concede to the climate crisis that the oil industry is determined to inflict upon us by mining the tar sands. And if we choose the latter, well then, sure, Keystone XL won’t kill us because we’ll be dead anyway.

President Obama said in his State of the Union address:

“And when our children’s children look us in the eye and ask if we did all we could to leave them a safer, more stable world, with new sources of energy, I want us to be able to say yes, we did.”

If we do this – if we put ourselves in position to say “yes, we did” at that critical moment – then we’ll use less fossil fuel. We’ll dramatically increase efficiency, develop clean energy, and expand transportation choices. We’ll stop building new fossil fuel infrastructure that makes the problem impossible to solve. Oil demand will drop. The price producers can charge for oil will be relatively low, because we won’t need so much. When they don’t have us over a barrel, a barrel will cost less. And Keystone XL, according to the FEIS, will fail the President’s climate test.

So, 11 volumes and over 1000 pages of analytic navel-gazing later, we land back at the inescapable exercise of free will. It’s not really about which analytical assumptions we choose. It’s about which world we choose. And in this instance, that choice will be made squarely and in the brightest possible light by the single human being on Earth who has the greatest power to effectuate solutions, or forsake them.

From Gandhi’s lips to Obama’s ear: Be the change.

[i] In a super-low oil price world, the pipeline would sit empty and rust away. We should live so long.

[ii] Paradox alert: When we say “low oil price” here, we mean the price that producers can charge for a barrel. A low-carbon world may well be a higher gasoline price world for consumers, because we’d have public policies that make prices tell the truth about the total cost of oil. Not to worry though, we’d be paying less for energy overall. The point of internalizing carbon costs into fossil fuel prices isn’t to pay them. It’s to free ourselves from them!