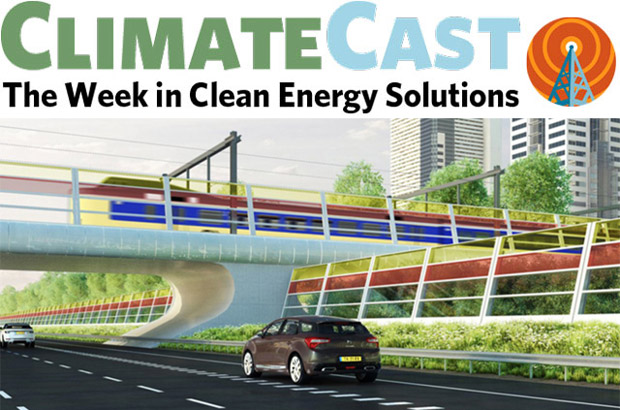 Pledge, pledge, who’s got a pledge?

The age of coal-fired electricity will end in New Zealand by December 2018, its largest utility announced last week, putting the country on track to get 90 percent of its electricity from renewable sources by 2025. In neighboring Australia, the government readied a low-ball carbon reduction pledge ahead of the December Paris climate summit, although polling showed voters would prefer a more aggressive strategy. Trinidad and Tobago became the first Caribbean nation to make a climate pledge, with the oil exporter offering a 15 percent cut by 2030. The Non-State Actor Zone for Climate Action (NAZCA) has compiled voluntary carbon reduction promises from subnational governments representing 12 percent of humanity, as well as businesses and investors.

Shell Oil withdrew from the lobbying group ALEC (American Legislative Exchange Council) last week, citing ALEC’s resistance to addressing climate change as a key reason for its decision. Although this stance might seem to contradict Shell’s continued pursuit of Arctic oil, its executives say global oil demand will grow, and they might as well be the ones to meet it. Financial analysis also shows that steady dividends are crucial to oil stocks’ appeal—a payout predicated on firms’ replacing depleted reserves. Those monetary rewards are evaporating, however, for Brazil, whose oil industry is embroiled in a multi-billion-dollar bribery scandal, and North Dakota, hit hard by declining oil prices.

Clean Power rules: devils and devas in the details

Publish 1,560 pages of new regulations, and it will take the better part of a week to predict their impact, from climate diplomacy to utility action. Wonks will enjoy this step-by-step explanation of how the Clean Power rules will work, geographers will thrill to the map of how much cleaner each state’s electricity generation needs to get (up to 48 percent cleaner, in South Dakota’s case), and politicos will scrutinize Republicans’ and coal companies’ options for challenging the rule. Most utilities—except coal-heavy ones like Southern—seem content with the rule, thanks to some tweaks since the draft, which also might help bulletproof it from legal challenges that are sure to follow.

Europe notched milestones in its renewable energy transition last month, with Germany’s production of solar power exceeding its nuclear electricity for the first time. Clean energy provided 78 percent of the country’s kilowatt-hours on July 25, breaking a record set in May 2014. All that clean energy has brought growing pains, as Germany’s transmission network hasn’t kept pace with regional imbalances of electricity generation and demand, routing excess power through its unwilling eastern neighbors. The continent obtained 8 percent of its electricity from 130 GW of offshore wind last year, which NYT columnist Roger Cohen would argue is partly due to Europeans’ willingness to accept regulation for the common good.

Climate a campaign issue...north of 49˚N

Climate was absent from last week’s televised debate among the top Republican presidential hopefuls, although it did surface in the match-up of trailing candidates, when Sen. Lindsay Graham was grilled for backing Obama’s 2009 climate bill. The next president will have broad latitude to expand or weaken Obama’s policies, and all Republican candidates have lined up against them. They might be barking up the wrong tree in light of a poll showing that New Hampshire and South Carolina Republicans support Obama’s climate actions. In Toronto, a debate among Canada’s party leaders ahead of October’s election turned a spotlight on Prime Minister Harper’s failure to curb carbon pollution during his tenure.

Methane leaks from natural gas wells and pipelines have been underestimated, according to a new peer-reviewed paper in Energy Science & Engineering. The flaw in the measurements stems from a glitch in how the sampling devices switch between a high-sensitivity instrument that detects low concentrations of methane to one that records higher concentrations. The results could up-end judgments about the value of natural gas as a more climate-friendly substitute for oil and coal, because methane is a more potent greenhouse gas than carbon dioxide. Natural gas has boosted the fortunes of Qatar, the world’s pre-eminent exporter of the fuel in liquid form, although its exports have plateaued since 2011.

Ikea will stock only LED light bulbs in its stores, retiring halogens and compact fluorescents that had their turn as environmental favorites. Ikea executives credited the decision to LEDs’ dropping price and technical superiority. Equally remarkable smart windows may come on the market by 2017, with new nano-crystal coatings making it possible to tune the amount of light and heat that a window will transmit. Nano-particles could also improve the capacity and power of lithium-ion batteries, in a configuration that MIT researchers stumbled upon by chance. And a Dutch technology professor is testing “luminescent solar concentrator” PV panels, which look like stained glass and can do double-duty as highway noise barriers.