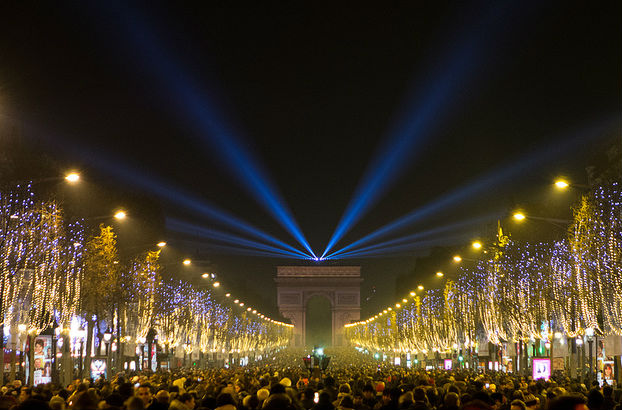 “Darkness cannot drive out darkness.  Only light can do that.”

Let’s just call it “Paris.” Not the “21st Conference of the Parties to the UNFCCC.”  Not the “11th session of the Meeting of the Parties to the 1997 Kyoto Protocol.” Not even the “Climate Summit.” It’s all of that, but “Paris” says so much more. City of Light. Where better to tackle climate solutions’ nemesis: darkness?

Almost as if to pre-empt the light, darkness of the most desperate and terrifying kind descended on Paris in the November 13 attacks. The world convenes now with an even more urgent and sober sense of the pressing need for global cooperation for peace and justice.

Climate solutions won’t cure all ills, but they are an important part of a systemic response to terrorism; a strong global climate strategy will reduce the conditions for desperation and the violence it breeds.  As a result of the attacks, plans for the biggest and most vocal demonstrations of public will for climate action on the streets of Paris have changed.  But the light – in Paris and everywhere – will not be denied. Climate marches will go on as planned around the world on November 28.  And it will take all the light we can muster to overcome the prevailing darkness.

Having glimpsed the light of climate science – the fruit of human reason, cultivated by the Enlightenment that emanated from Paris – Exxon and its cohorts spent the last quarter century trying to snuff it out.  When asked about the investigation into their climate deceptions and how it might affect the company’s financial prospects, ExxonMobil CEO Rex Tillerson tried to reassure shareholders: “People are always going to need what we do.” The titans of carbon can no longer suggest that fossil fuel dependence is a good thing; even they don’t have enough money to sell that. So they say we have no choice.

This is a darkness even more profound than lying about climate science – a conscious and cynical strategy to convince us that we lack the brains, the will, the guts to win a decent future.  They don’t deny climate science in public anymore; they just ask us to accept that we must condemn our kids to a world ravaged by the consequences of their product, while purchasing political outcomes that preclude better alternatives.

Our own doubt about our ability to make the transition from canned sunlight (fossil fuel) to fresh renewables is the last dark corner where Tillerson and his ilk can hide.  But the light of the clean energy revolution is dawning. It will burn brightly in Paris, as solutioneers gather to illuminate the path to a clean energy future.

And as the talks begin next week, Paris is coming alive with the unbridled determination of activists and citizens – thousands strong and undaunted. A diverse contingent of Northwest leaders will be there from communities of labor and faith, First Nations, environmental justice advocates, business and government – joining with counterparts from around the world to lay the groundwork for negotiators to aim higher.

After decades of agonizingly slow UN negotiations, and the bust in “Hopenhagen” in 2009, we’re done waiting. The clean energy revolution is on. Resistance to fossil fuel development is stiff, global, and gaining strength.  President Obama stood up to what he once called “the tyranny of oil” by rejecting the Keystone XL pipeline, and the Administration is moving ahead with the Clean Power Plan. (The U.S. Congress, however, remains inert…on a good day.)  Cities, counties, and states are developing and implementing climate action plans. Businesses are responding:  the leaders are staking out winning positions in the transition to a clean energy economy, while laggards face increasingly tough questions about climate risk.  Kids are enforcing the intergenerational contract. The fossil fuel industry is retrenching in the face of furious opposition and better energy choices. And every day brings more encouraging news about the pace of the clean energy transition that’s making their expansion plans as irrelevant as they are unconscionable. Climate solutions and economic equity are converging toward a working vision of a just, rapid transition to a fossil-fuel-free future.

All this light is gathering in Paris. Its brightness may embolden national governments to make some progress in the negotiations – emerging with a deal that ramps up emission reductions, boosts financing for clean development and resilience, and closes some of the still-yawning gap between our commitments and what’s necessary. But the guiding light won’t be emanating from inside the negotiations. As Bill McKibben says, the deal they sign will be the climate scoreboard, not the game itself. The game, the action, is the heat and light from the rapidly spreading fire of a global movement for climate justice and the irresistible momentum of the clean energy transition. It’s the gathering strength of our resolve – all lit up – to wage and win our best and only viable future, a future of broadly shared economic opportunity, powered by clean energy.

Hear KC discuss the Paris climate talks on KOMO radio (streaming mp3): "We're in a global emergency... but it's never too late to the right thing."