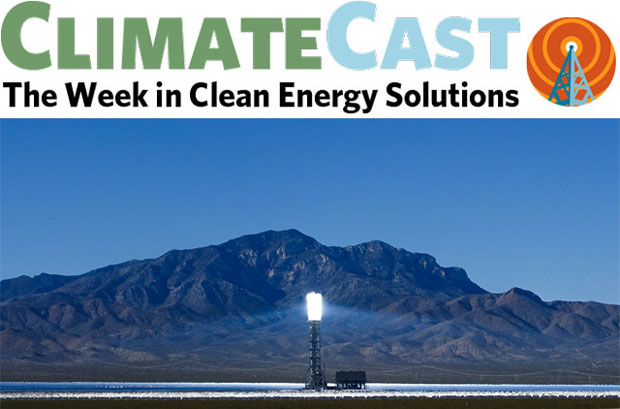 Cheaper oil and gas no bar to clean power’s growth

Photovoltaics have become cost-competitive in Japan, and they’re allowing utilities to shutter 2.4 gigawatts of oil generators, even though the island nation’s 43 nukes have been closed since Fukushima’s 2011 meltdown. China aims to install more than 17 GW of solar generation this year—a 67 percent increase—and has already connected 5 GW in the first quarter of 2015. Renewables are surging because solar and wind prices are falling and will stay low irrespective of fuel costs, giving them an edge even when oil and gas are cheap. Just don’t invoke Moore’s Law, which applies to microchips but not solar panels, even though both are made of silicon.

Buzz mounted last week ahead of Tesla’s planned announcement of a new line of home- and utility-scale batteries. The battery packs will be available for lease in tandem with panels from SolarCity, which is already testing the combination in a 300-customer pilot project. A Berkeley lab study found that down-cycled EV batteries would likely have enough life for home power storage, but more trials are needed. Power storage would enhance the smart grid, which was tested in the Pacific Northwest under a federal project that is winding down with interesting conclusions but no immediate implementation, absent utilities’ willingness to send price or demand-management signals to their large customers.

The Senate GOP majority is looking for ways to undercut President Obama’s stance in worldwide climate negotiations, reported The Wall Street Journal, prompting other nations’ diplomats to probe whether U.S. commitments can be trusted. The GOP is channeling its base: Republicans who self-identify as conservative were the only segment in a recent poll who believe human-caused climate change will not appear in their lifetime. On the other side of the spectrum, President Obama urged action on climate from an Earth Day bully pulpit in the threatened Everglades, and used his speech at the annual White House Correspondents’ Dinner as an occasion to get publicly angry at congressional climate deniers.

More than 80 percent of the world’s 500 largest asset managers—controlling over $30 trillion in capital—are ignoring climate in their investment decisions, according to an assessment released last week by the Asset Owners Disclosure Project. Nine firms, mostly pension funds, won the ‘AAA’ top ranking in the study. Their desire to do well by doing good is echoed by a few big corporations, from Ikea to Nike, who lobby for climate action in Washington. They’re outnumbered by opponents such as Shell Oil, whose role in watering down the EU’s climate targets was revealed Monday, after attracting protest in Seattle over its plans for Arctic oil drilling.

A few thousand birds a year die at a concentrating solar energy plant in California’s Mojave Desert, according to a new report released last week by the California Energy Commission. Wildlife biologists sampled the terrain for avian mortalities and tested search teams’ effectiveness by seeding the area with dead birds of various sizes. Fewer than half the deaths could be attributed to the plant’s concentrated sunlight or to collisions with the plant’s mirrors. At the Crescent Dunes power tower, across the border in Nevada, plant operators figured out how to spread out the sunbeams when the plant is on standby, so as not to incinerate feathered flyers.

Curbing methane leaks from oil and gas operations would be a powerful way to combat global warming, according to a new study from the Environmental Defense Fund, and would cost just a penny per thousand cubic feet. California is trying another approach to reducing methane pollution, using offset credits from the carbon cap program to underwrite projects at dairies to trap methane from manure processing and burn it for power. In the Northeast, revenues from that region’s greenhouse gas trading have provided $800 million for energy efficiency, renewables, and other reductions in climate pollution.

Millennials aging into the car-buying years

A few years after Millennials were branded as the “Cheapest Generation” and their buying habits heralded as the foundation of a “sharing economy,” reports of their rising car purchases attracted a lot of contrarian digital ink. But millennial-buys-car isn’t such a man-bites-dog story after all, considering both their numbers in the population and how a cohort’s buying habits can change as it ages into new transportation needs. Regardless, one car they probably won’t be buying is this plug-in hybrid biodiesel Hummer on snow tracks, now being outfitted for a trip to the South Pole.

On the Climate Solutions blog: Ross Macfarlane announces the support of a leading group of large U.S. businesses for Washington State to adopt a Clean Fuel Standard; Kristen Sheeran takes a break at the Oregon legislative session’s halfway mark to take stock of progress so far on clean energy legislation; Jenna Garmon describes how the City of Gresham, OR is turning fats, oils, and grease into usable energy; and Elizabeth Willmott touts cities such as Vancouver, BC, that have pledged to be powered by 100 percent renewable energy by 2050, and shares other highlights of city-led clean energy innovation.