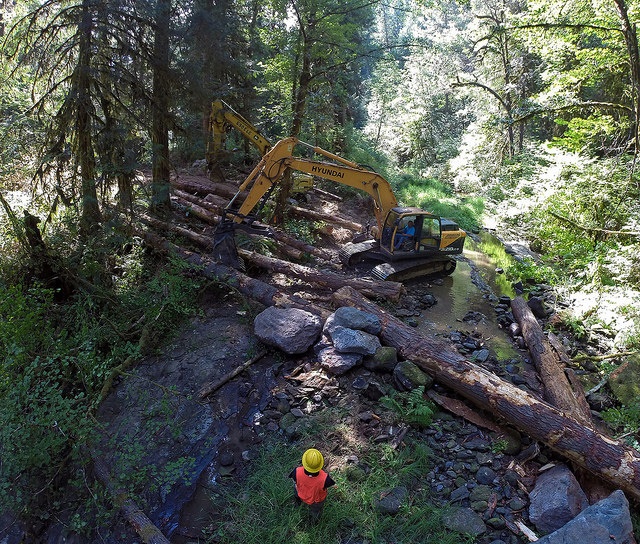 Good-paying jobs that produce multiple products such as recreational opportunities, healthy fish runs, clean water and climate-cooling carbon sequestration in rural communities where good jobs have been scarce – This is the restoration economy.  In Oregon the restoration economy created 6,483 jobs, generated $977.5 million in economic activity from 2001–2010, a new report from Ecotrust says.

“Restoration can drive economic development and job creation, particularly in rural communities that have suffered from persistently high unemployment rates,” said Spencer B. Beebe, president and founder of Ecotrust. “And, unlike in many other sectors of our economy, restoration jobs can’t be outsourced to far-off places.”

The work centers on stream and watershed enhancements that make life easier for salmon and other fish.  The jobs cover a range, from landscapers, construction workers and heavy equipment drivers, to biologists and engineers. Projects buy materials from local venders such as quarries and nurseries.

Since most restoration workers live in the rural areas where work is done, it brings dollars to local downtowns. The county where a project is located keeps 80 cents of every dollar spent, and another 10 cents stays in state.  Meanwhile, every million dollars spent on restoration projects creates 17 jobs, significantly higher than natural gas, or road and bridge construction. Ultimately, restoration bolsters the sport and commercial fishing industries in Oregon, helping them to remain a major economic force.

We’ve taken natural benefits such as clean water, fish habitat and carbon storage for granted.  But we can’t do that anymore, because many ecosystems are degraded and can no longer provide those benefits in ways they could.  The restoration economy is about making investments that pay back in terms of a healthier nature capable of supplying a full range of natural benefits.  The new Ecotrust study strongly validates that this investment also supplies the hugely important value of new jobs and revenues in rural communities.

“Habitat restoration jobs pay dividends twice, first in creating good, local jobs immediately, and then, for many decades to come, through increased benefits from fisheries, tourism and resiliency for coastal communities,” said Eric Schwaab, assistant administrator for fisheries for the National Oceanic and Atmospheric Administration. NOAA provides technical expertise and funding to restore coastal, marine, and migratory fish habitat in Oregon and around the nation.

A recent national study published in Marine Policy analyzing job creation and other economic impacts from NOAA restoration projects found that an average of 17 jobs were created for $1 million invested. That rate of job creation is significantly higher than other industries, including coal, natural gas, or road and bridge construction.

Congressman Earl Blumenauer, who represents Oregon’s 3rd district and recently introduced HR 6249, the “Water Protection and Reinvestment Act,” a bill that calls for investment in clean water infrastructure across the nation, commented: “For too long, we have treated our rivers and waterways like machines to the detriment of water quality and quantity. Investing in restoration not only improves habitat for fish and wildlife, it creates jobs and bring much needed revenue to local communities. Oregon has tremendous opportunities for restoration that can serve as a model for the rest of the nation.”

A recent University of Oregon report found that an average of 90 cents of every dollar spent on restoration stays in the state, and 80 cents of every dollar spent stays in the county where a project is located. For example, of the nearly $400,000 invested to restore Little Butte Creek in Southern Oregon from 2009–2011, 72 percent was spent in Jackson County, and 97 percent was expended in Oregon. Over half of those dollars went to salaries that directly benefit Oregonians.

Mike Herrick, Owner of Aquatic Contracting said, “Over the last 10 years, restoration projects have allowed us to provide sustainable livings for our employees. They can use their skills in construction and feel good about what they are doing. We have grown from just a couple of employees to as many as 20. Without this funding we would not be able to provide these opportunities and support the local economies where we work.”