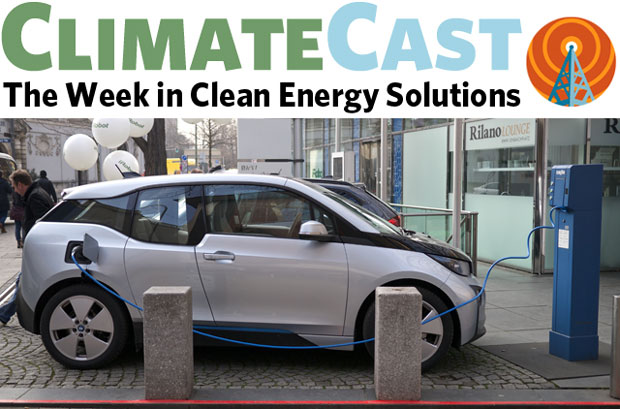 Rooftops could generate 39% of US electricity

Solar arrays on US rooftops could supply nearly 40 percent of the nation’s electricity, according to a new analysis from the National Renewable Energy Laboratory that nearly doubles its previous estimates. NREL’s bright outlook on the technical potential contrasts with the federal Energy Information Administration’s history of lowball predictions of solar and wind installations—a tendency which the EIA now promises to correct despite the inherent difficulties of that assignment. One sector with unrecognized potential is community solar, which can be built nearly as cheaply as utility-scale solar, says a new Rocky Mountain Institute study, and can also make solar ownership available to renters or anyone without a suitable roof.

Developing countries overtook the industrialized world last year in renewable energy investment, says Bloomberg New Energy Finance, and new renewable generating capacity outpaced fossil fuel, nuclear and large hydro combined. The 83-page report inspired nearly as many interpretations, with one author highlighting the growth in clean energy investment, another touting the regional distribution of investment and a third warning the pace is still insufficient to meet the goals of the Paris accord. It isn’t just dollars, it’s kilowatt-hours, too: China’s wind farms produce nearly as much electricity as the Three Gorges Dam, while the US installs enough new wind generation every two months to equal the output of Hoover Dam.

Coal totters toward the door

Scotland shut down its last coal-fired power plant last week, en route to producing all its electricity renewably by 2020. The closure of the 46-year-old, 2,400-MW plant and Wall Street’s flight from coal were the latest symptoms of coal’s continuing downfall; the next symptom is apt to be Peabody Coal’s imminent bankruptcy, which would likely add fire to the movement to divest from coal. In India, the government’s proposed budget would double the tax on coal to nearly $6 per ton, with proceeds supporting the Clean Environment Fund. In Montana, where bankrupt Arch Coal threw in the towel on its proposed Otter Creek mine, local opponents celebrated a victory four decades in the making.

Tesla Model 3 to be unveiled, Bolt in pre-production

With Tesla about to flip the river card of its EV line-up with Thursday’s unveiling of the $35,000 Model 3, observers chattered about its prospects, and the truly obsessed tried to decide where to reserve the new model. The Chevy Bolt, another 200-mile mid-market EV, started rolling off the assembly line last week, with pre-production test models. At the lower end of the market, Colorado buyers’ co-ops negotiated deals with Nissan to buy new Leafs for about $11,000 after tax credits, and under $9,000 for fleet purchases. In the UK, a government infrastructure plan inadvertently disclosed that Dyson, known for its vacuum cleaners and hand dryers, is developing an electric car.

Knowledge is power … and also dread

American meteorologists—whose climate awareness has lagged behind climatologists’—now agree that climate change is happening, according to a new study from George Mason University. Two-thirds believe human activity is the main cause of climate change. The findings came as scientist James Hansen released the final version of a paper (and video summary) warning that a 2˚C increase in global average temperature could endanger humanity within decades by causing dramatic changes in weather patterns and sea level, as glacial melting affects ocean circulation. Also in the Worse-than-Expected Dept.: leakage of methane, a more potent greenhouse pollutant than carbon dioxide, counteracts any climate advantage from switching to natural gas, Bill McKibben argues, making renewable energy the only climate-friendly option.

ExxonMobil’s shareholders will get to vote on climate proxy resolutions this year, the Securities and Exchange Commission ruled. The firm replaced only 67 percent of the reserves it extracted last year, part of a trend in which the world’s seven largest petroleum firms slowed exploration and saw their reserves drop by 2 billion barrels of oil equivalent. Trying to block new drilling, activists in New Orleans disrupted a federal auction of oil and gas leases in the Gulf of Mexico. Oil prices have risen to about $40 per barrel in the last few weeks because of speculative commodities trading, as hedge funds unwound their wagers on cheap oil.

Albertan oil sands veterans launched an effort last week to re-train workers for the province’s renewable energy industry. The initiative, called Iron and Earth, comes at a time when the global slump in petroleum prices has eliminated some 100,000 jobs and pushed Alberta’s unemployment above 12 percent. South of the 49th parallel, Hillary Clinton promoted her $30 billion plan to help coal communities adjust to decarbonization, and a new tally found that more than half a million people in the 12-state Midwest region work in clean energy, including 58,000 in solar and wind. In western Colorado, a town forsaken by coal and seeking a new industry will reconsider its three-year-old ban on legalized marijuana.

Photo: A BMW i3 soaks up an electric charge. Photo by Kārlis Dambrāns, via Flickr.