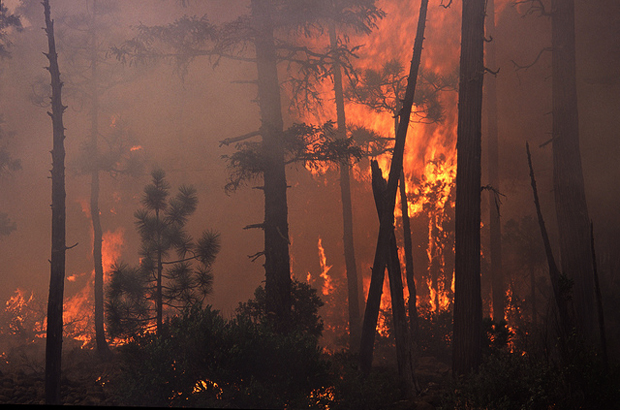 We drop down into Long Valley three hours north of San Francisco, and the haze thickens to soupy smoke, blocking our view of the ridgeline redwoods. Through the closed car windows, the smell is unmistakable, as if we are sitting on the wrong side of a campfire.

Which isn’t to say that wildfires were unknown in these parts before humans started tinkering heedlessly with the climate—if it weren’t for wildfires, sequoias wouldn’t sport their thick, fire-retardant bark. Even the immediate cause of this summer’s Lodge Complex Fire was well within the bell curve of normal weather for California’s Coast Range: a rare summer thunderstorm, whose lightning strikes kindled tinder in the underbrush. The blaze ultimately blackened more than 12,000 acres.

But global warming had stacked the deck in favor of this fire. The hotter and drier the air, the easier for the flames to confound the efforts of the 2,300 firefighters, 186 engines and 14 helicopters arrayed against it. While hot summer weather is not news in California, global warming makes it more likely that fire will get the upper hand. Current climate models predict a shift to lower average rainfall in much of the state, increasing the risk of droughts like the one gripping California this year, and with them the risk of severe wildfire.

In the face of these worsening odds, people are taking steps to protect themselves as best they can. At the edge of almost every town we traversed on U.S. 101, signs exhorted residents to clear 100 feet of “defensible space” around each home. Within these perimeters, vegetation is cleared back, grass cropped close to the ground, and trees limbed up to increase the chances that houses and other structures would avoid significant damage from passing wildfire.

When we lived in the region, these were practices we adopted as a routine California precaution, like strapping a water heater to the wall to prepare for the inevitable earthquakes. Wildfire was a fact of life, and we did what we could to improve our chances.

Nevertheless, clearing brush is not enough. No one expects defensible space and a garden hose to take the place of a collective response to conflagration. All those helicopters, fire engines, and their crews at the Lodge Complex cost some $41 million, which is just a trickle next to the $2 billion or so spent annually by the U.S. Forest Service, not even counting the budgets of other agencies that battle wildfire. The two ways of responding to fire complement each other: you do what you can in your own backyard, and join with fellow citizens to protect the larger community by assembling a fire department—an idea as venerable and American as Benjamin Franklin.

Driving over Rattlesnake Summit and leaving the smoke of Long Valley behind, I realized that these approaches to wildfire offer a parallel to the ways we can turn back the threat of global warming. It will take more than LED light bulbs and plug-in hybrids—the “defensible space” of climate action—to stave off dangerous climate change.

To keep the world from being seared by global warming, we will also have to muster a societal response that fills the same niche as the national cadres of smokejumpers and helicopter pilots. We’ve got to set common goals — such as limits on carbon pollution, clean fuel standards for low-carbon transportation, and renewable electricity targets. We can use clever policies to support the workers, entrepreneurs, and consumers who turn those goals into reality. And we’ve got to develop plans for adaptation that ensure that global warming’s worst harms don’t fall lopsidedly on the poor and disadvantaged. In the process, with any luck, we will make the actual firefighters’ jobs a little easier.