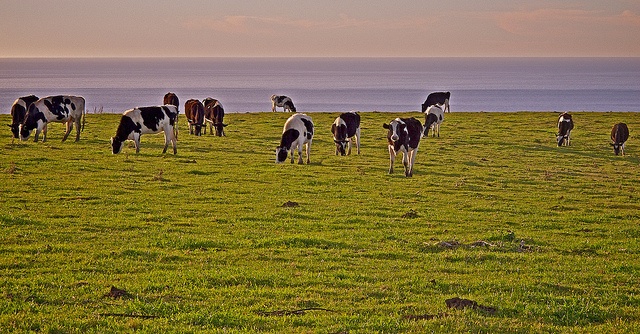 In the era of climate consequences, it’s easy to characterize carbon as the problem and forget that it’s actually a building block of life. The problem isn’t carbon per se; it’s just that there’s too much of it in the wrong place. We’ve pumped and dug it out of underground fossil fuel deposits and put it in the air where it is disrupting our climate. So in addition to transitioning off fossil fuels, we must get creative about removing existing carbon pollution from the atmosphere.

Fortunately, a solution lies right under our feet and John and Peggy Wick think they might have stumbled upon it on their cattle ranch an hour north of San Francisco.

As Goes Soil, So Goes the World

Soil is a huge carbon reservoir, storing twice as much carbon as the atmosphere. Even a small increase in soil carbon could have a big impact on carbon dioxide pollution levels, particularly in rangelands, which span a quarter of the earth’s land surface and store about a third of all terrestrial soil carbon. However, widespread degradation of rangelands has resulted in a significant loss of soil carbon. At the same time, organic refuse from cities that could be turned into carbon-building soil amendments often goes to waste in landfills, decomposing and emitting methane, a potent greenhouse gas. A key initiative of the Marin Carbon Project (MCP) is capturing that organic material to build soil and store carbon, and it all started with the Wicks.

When they acquired their land in 1998, the Wicks wanted to restore the native grasses and wildlife. Moving the cows off the 540-acre ranch seemed the logical approach, but weeds took over, wiping out other native plants. After hand-pulling and herbicides failed, they sought help from rangeland ecologist Jeff Creque, who suggested bringing the cattle back, but managing them in a different way to mimic the grazing habits of native elk (a la holistic management, an approach not without controversy).

John’s growing concern about climate change made him wonder how he could manage the grasslands to store more carbon, and how this could be replicated on a grand scale to really make a difference. To that end, he and Creque gathered experts together to consider this question and launched the Marin Carbon Project.

Bringing together researchers, producers, agencies, and institutions, the MCP works to identify practices that increase carbon sequestration in rangeland and agricultural soils in Marin County. Storing carbon in rangeland soils is not a new concept, but the MCP is bringing something that has been largely missing from this work:  rigorous science.

To answer John’s questions, the MCP worked with researchers at the University of California to study the effects of amending rangeland soils with compost. Berkeley Professor Whendee Silver and her team found that adding half an inch of compost increased soil carbon sequestration by 40% compared to control plots.  Adding compost also enhanced soil quality, increased plant growth and cattle forage by up to 50%, and helped the soil retain moisture, a crucial benefit in drought-stricken California.

A subsequent lifecycle analysis of the greenhouse gas impacts of compost compared to other soil amendments confirmed these results: adding compost to a hectare of rangelands would offset the emissions from four diesel truck trips from San Francisco to Washington, DC. Much of this climate benefit came from diverting the organic materials used to make the compost from landfills or manure ponds, where they would have rotted and produced methane.

Estimates indicate that enough compost could be produced from diverted organic materials to apply to about 5% of California’s rangelands annually, with the carbon storage results lasting decades. The study also found that the climate impacts of transporting the compost from source to end use were relatively small compared to the climate benefits from composting, indicating that these practices could be adopted over large areas.

Saving the World, One Ranch at a Time

These results suggest that turning organic materials into compost and applying it to rangelands on a larger scale could store a lot of carbon, repurpose organic waste, improve the health of rangelands, increase climate resilience, and help farmers’ bottom lines. There are practical issues that would need to be addressed before this approach could be implemented at scale, such as the cost. To that end, the MCP is implementing carbon farm plans on three demonstration farms in Marin, with the ultimate goal of securing the policy and economic tools needed for widespread adoption of climate-friendly agricultural practices in Marin County and beyond.

With a small window to take serious climate action, we must act now and act fast. Thanks to this work done by innovators like the Wicks and the Marin Carbon Project, we are getting closer to finding the answers that we need to increase natural carbon storage and build a vibrant restoration economy.