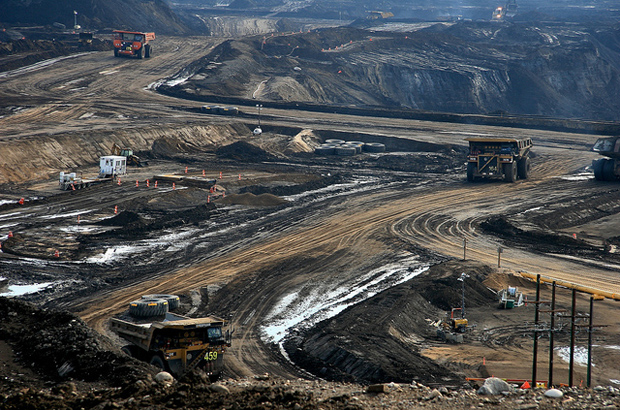 Those of us in the Northwest who have been working hard to promote clean energy solutions can justifiably wonder if “Big Oil” has suddenly placed the region in its cross hairs. Every day we are hearing new concerns about “bomb-trains” rolling through our communities carrying volatile crude oil to proposed terminals and refineries. Just this Sunday, more than a thousand citizens showed up to a rally on the Seattle waterfront protesting Shell’s plans to home-port its drilling fleet in our harbor.

But do we have to worry about a tar sands invasion, too? I’m afraid the answer is yes.

The Natural Resources Defense Council, NextGen Climate and ForestEthics published a new report today, West Coast Tar Sands Invasion, which graphically documents the threat of greatly increased amounts of tar sands crude from Alberta finding its way to refineries and export terminals in Washington State and along the Pacific Coast. The report outlines the ways that oil companies, pipeline operators, railroads, and proponents of oil-by-rail terminals are working to dramatically increase the amount of tar sands crude that flows to and through our region. The authors also produced a region-specific issue brief, Next Frontier for Dangerous Tar Sands Cargo: the Pacific Northwest. Climate Solutions is proud to have helped partner in the production and release of this report and issue brief.

To take just one example, Kinder Morgan is working to triple the size of the existing Trans Mountain Pipeline that goes from Alberta to SW British Columbia, with a spur to the four refineries in NW Washington. These refineries already get an increased share of their crude from tar sands as the supplies from the Alaska North Slope ramp down, and one report predicts as much as an eight-fold increase in the coming decades. Railroads and oil-by-rail terminal proponents are actively promoting other, and even more dangerous ways to get the tar sands crude from Alberta’s boreal forests to west coast refineries and export terminals.

So why should we worry about a tar sands invasion? For us, of course, the first, last, and most critical issue is the climate impact. As my colleague, KC Golden put it in his piece articulating The Keystone Principle, we need to stop making climate disruption worse. Specifically, we must stop building infrastructure with the sole purpose of extracting carbon reservoirs that will have to stay in the ground if we have any hope of staying under the two degrees Celsius threshold that scientists say is the limit beyond which we trigger the most catastrophic impacts of global warming. Conventional oils have huge carbon impacts, but refining oils from tar sands increases those emissions dramatically. A seminal study in Nature earlier this year concluded that that we can’t exploit the tar sands (as well as arctic oil and almost all the remaining North American coal deposits) without blowing past our climate targets. Or, as James Hansen (our most esteemed climate scientist), put it, if Canada digs up and burns all the tar sands, “it will be game over for the climate.” That’s why we oppose the Keystone XL pipeline, and that’s why we are working hard on the other key fossil fuel infrastructure issues confronting our region, including coal exports and the Shell home port controversy.

The carbon cost of the tar sands invasion provides an additional reason to promote real solutions for our addiction to oil, including adopting a Clean Fuel Standard that promotes cleaner energy alternatives such as electric vehicles, renewable natural gas and low-carbon, sustainable biofuels.  Since tar sands have a much higher carbon footprint than conventional oils, a clean fuel standard creates a clear market signal that helps support investments in cleaner alternatives.  California and British Columbia have already implemented clean fuel standards, and we recently celebrated a successful campaign to ensure the policy moves forward in Oregon.  Currently, we are working hard as part of a broad coalition of business, labor, health, communities and other stakeholders to adopt this policy in Washington State. We hope you will join us in this effort.

There are plenty of other reasons to be concerned about the West Coast tar sands invasion, all of which are summarized in the new report. Some of the top issues include destruction of large swathes of Canada’s boreal forest, the threats to our marine waterways from spills of tar sands, health and safety issues from rail transport, risks to workers and communities near refineries, and the concerns of Tribes and First Nations about the huge increase in fossil fuel transport across their communities. Numerous spills have shown that tar sands crude creates unique risks to our environment and communities.

I hope you will read this new report. I also hope you will join us in continuing to work to stop a huge expansion in fossil fuel infrastructure in our region as we continue the transition to cleaner fuels and a clean energy future.