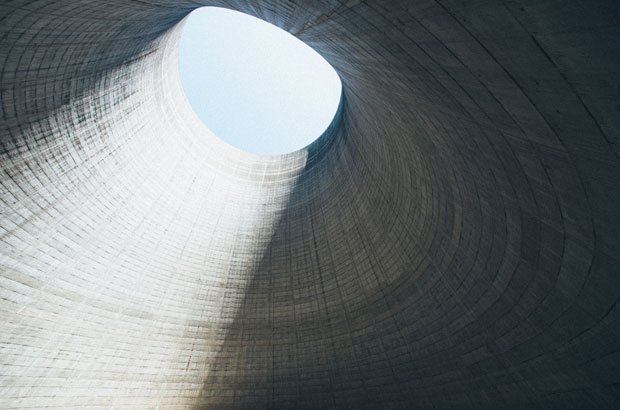 SHARKHATS
We need 100% fossil-free electricity. But that isn’t a blank check for nukes or hydro.
KC Golden
January 24, 2018

Here’s a useful test for evaluating which energy technologies are the most promising as we end the Fossil Fuel Age:

Nuclear energy as we know it fails this test. And even if it were safe, the current generation of nuclear power technology isn’t remotely cost-competitive with renewables and energy efficiency. Prospective new nuclear technologies that might address these problems—if indeed they can be addressed—are nowhere close to commercial viability. Even their (sober) proponents concede that. Utilities are not even talking about nuclear in their energy resource plans. For the foreseeable future, it ain’t happenin’.

Which brings us to the key point: stopping nuclear power development is not really the issue we need to tackle right now. It’s already stopped. THE issue—the one that more than any other will determine the fate of human civilization and all other life on the planet—is ending our dependence on fossil fuels. Not completely, tomorrow; but fast, in the next couple of decades. And we can take a big, necessary step right now.

Washington’s 100% fossil-free electricity bill—SB 6253—would end the development of new fossil-fueled power plants in this state. It addresses an immediate and urgent challenge: preventing new, long term investments in gas-fired power generation. It would put Washington’s electric power system in compliance with the first rule for getting out of holes: stop digging. The basic imperative is backed by multiple lines of economic and scientific research, and robustly affirmed by common sense: If we’re going to make our climate prospects better, we have to stop making them worse. A fair, successful transition will take a while. But it won’t even be possible if we don’t stop making long-term investments in fossil fuel infrastructure now.

SB 6253 would not specifically preclude development of nuclear power. Nor would a cap on carbon emissions. Nor would a carbon tax. Nor does retiring a coal plant. The effect of this policy would be roughly similar to winning every single permitting battle for every fossil-fueled electric power plant proposed in Washington. Except instead of winning them one-by-one, it would win them all, with a comprehensive public policy that seriously addresses the climate challenge.

To be clear and repetitive: all new fossil fuel development must end. That’s not an extreme position; it’s just physics, the price of having a planet remotely similar to Earth. Does that mean we should green light all other energy sources? Does it mean that everything other than coal, oil, and gas is “clean”? Of course not! Even if nuclear power could be made safe it would be so expensive to develop that we would blow the budget for solutions to climate change long before we got the job done. And hydropower projects that further endanger salmon should be, and largely are, off the table. SB 6253 would do nothing to undermine existing, largely effective protections against nuclear power and salmon-destroying hydro development. If we need further protections let’s work for those. But let’s not delay urgent action on climate.

If we’re going to get out of this climate crisis alive, we’re going to have to focus and move fast. Stopping nuclear power and new hydro were front and center for environmental advocates when utilities were building them or planning to do so. And we were largely successful. These battles never end completely, of course; vigilance will always be required.

But in order to guard against a remote hypothetical threat that we’ve already contained, will we really forego firm, clear prohibitions on fossil fuel development now?  Will we fail to act while there is still time to avert a civilization-threatening climate crisis? At this late hour in the fight for a livable climate, will we abdicate because we’re content to have won yesterday’s battles?

To those whose primary focus is not climate, this is not about “our issue” being more important than “yours.” I have fought nuclear power and I’ll do it again if necessary. I’m a raft guide and river worshipper—I’ve campaigned hard against new dams and fought to remove old ones. But the clear, present, urgent threat to our  kids’ future right now is fossil fuels, and we need to rise to that challenge while we still can.

This is the problem with climate—for everyone, always, it seems too big, too far outside our scope of effectiveness. It makes us feel scared and guilty and weak so we understandably shift our focus to other important things that we know how to do, things where we really believe we can make a big difference.

But we have run out of time for indulging self-doubt or waiting for spotless solutions. Everything is at stake now: fish, health, food….truly, pretty much everything that matters. And if we don’t rise up right now and seize this moment to turn the corner by ending further fossil fuel development, we’re toast.   We have every reason to believe that clean renewables and conservation will prevail in the race to replace fossil fuels—we’ll see to it.

Promise: I’ll be there if we need to fight expensive, dangerous new nuclear plants or salmon-threatening dams. But we need to pull together, in today’s fight, with enough confidence in the renewable energy revolution and our ability to stop other bad stuff that we can focus on what’s urgently necessary now. Please support SB 6253.