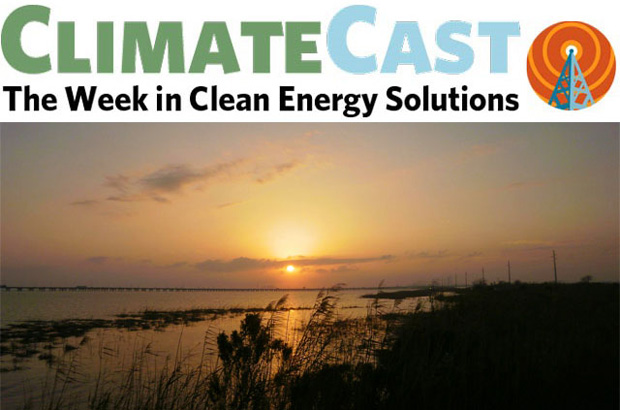 Erin Kinney
Who saves with solar, and who pays?
Eileen V. Quigley
August 6, 2014

Just weeks after the release of Risky Business, which detailed the economic risks from climate change regionally throughout the United States, the White House Council of Economic Advisers announced an analysis of the expense associated with delaying action on climate change. The study concludes that failing to reduce carbon pollution could cost the country $150 billion a year and climate-change expenses will increase 40% for each decade that nations do not curb emissions. Former Treasury Secretary Robert Rubin penned an op-ed on how ignoring climate change could “sink” the U.S. Economy.

Bloomberg, Facebook, and General Motors joined other Fortune 500 companies to announce their common interest in using renewable energy, emphasizing a focus on emissions reduction, greater choice, and accelerating cost parity with other energy sources. Meanwhile, in her new role as Apple's Vice President of Environmental Initiatives, former US Environmental Protection Agency administrator Lisa Jackson is pushing the company to do right by the climate, using solar power to manufacture the iPhone 6. Apple announced earlier this year it would power its data centers with clean energy.

The Edison Electric Institute laid out the case for why utilities should promote electric vehicles to encourage electricity use: an opportunity for load growth when retail sales of electricity are down 2% from 2007-2013. Power consumption is off despite the economic recovery and an increase in electronic gadget usage. At the same time, eight global automakers and 15 electric utilities announced work with the Electric Power Research Institute to create standards for integrating plug-in EVs into the grid that will make it easier for drivers to take advantage of utility programs, such as reduced rates for off-peak charging.

More than 58% of California was at the “exceptional drought” stage with the state short more than one year’s worth of reservoir water, the worst drought level since records began in the l990s. Lake Tahoe has dropped a foot beneath its natural rim. A map that combines satellite and ground-based data for underground aquifers clearly depicts the state’s dire situation, as does an interactive map of drought conditions across the country. Drought conditions throughout the West are impacting salmon runs, which are half the normal rate in the Klamath Basin due to decreases in water flow and increases in river temperature.

Clean energy financing not down and out

Clean energy project financing is on the up-and-up. Climate/green bonds are gaining acceptance among investors, growing from $11.4 billion in 2013 to an estimated $40 billion in 2014. This significant uptick prompted calls to create standards that will support a larger, more liquid market for financing climate and clean energy projects. After stagnating in the wake of federal opposition, residential property-assessed clean energy (PACE) programs are bouncing back in CA, NY, and FL, while pay-as-you-go solar financing is seeing record sales—all of which makes these top 10 tips for investing in renewable energy a worthwhile read.

Shore up coastal wetlands in lieu of sea walls

Restoring sea grass and oyster beds will keep pace with rising sea levels and sequester more carbon per acre than tropical forests, finds a study on the “living shoreline” effort to restore Delaware Bay’s tidal wetlands. Managers of a similar project in Mobile, AL hope private landowners will build living shorelines instead of seawalls using the new Army Corps of Engineers "living shoreline permit." In Maryland, landowners can only build sea wall or bulkheads if they prove it is not feasible to create a living shoreline. The federal government allocated $102 million in grants in June to fund wetland restoration to protect Atlantic coast communities against storms like Hurricane Sandy.

Who saves with solar…and who pays?

Arizona Public Systems, the state's largest public power utility, is planning a major investment in solar power, installing distributed-generation solar arrays on about 3,000 homes. The announcement caused grumbling from Arizona's private solar industry, since APS has fiercely opposed consumers connecting their own arrays to the grid. Other states deter residential solar, arguing that solar-generating homes and businesses connect to the common power grid without paying for its upkeep, thereby freeloading off other ratepayers. But a new report commissioned by the Nevada Public Utilities Commission finds the opposite is true: the cost savings and other benefits of rooftop solar are shared among non-solar as well as solar ratepayers, and the benefits far outweigh the costs.

With much of the western United States combatting wildfires, a new Stanford University report found that nearly one-fifth of carbon dioxide emissions can be attributed to wildfires, burning wood waste to produce power, and slash-and-burn agriculture, so-called “biomass burning.” While nearly a million acres are burning in WA and OR, the biggest fires are in Canada’s Northwest Territories, where six times the 25-year average acres have burned so far this year. Boreal forests are burning at rates not seen for 10,000 years, releasing tons of carbon, which leads to more global warming and hence more wildfires, as well as dropping black carbon on snow and ice in the Arctic, which increases ice melting.