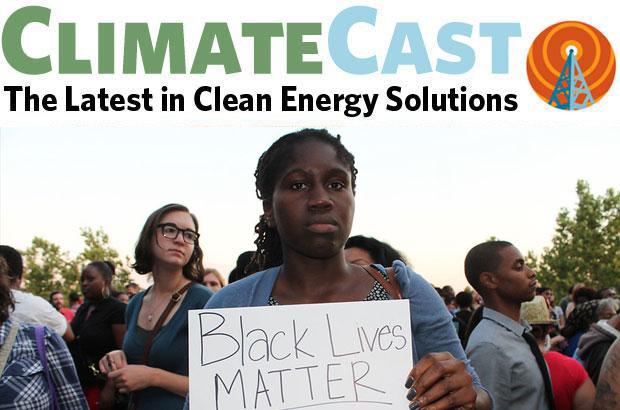 Climate justice and the movement to end police brutality

In the Northwest and elsewhere, the movement to end anti-Black racism is focusing urgently on the need to address and end police violence; Black, indigenous and people of color leading within the environmental community are making the case that the climate movement must do so as well, because an effective climate justice movement depends on BIPOC leadership. Dany Sigwalt comments that, as the co-director of climate advocacy group Power Shift Network, “police violence scares me more than climate change… I find myself paralyzed figuring out how to engage in this political moment because police violence terrifies me.”

For Hip Hop Caucus leader Rev. Lennox Yearwood, “climate change and police brutality are directly linked together, because the communities who are most impacted and vulnerable to police brutality are also the same communities that are most vulnerable to climate change.” Noting that the focus of our current environmental movement “is pretty much based on the backs of what happened” in the aftermath of Hurricane Katrina, he suggests that “this fifteenth anniversary [of Katrina] is a moment that the entire climate movement can get it right.”

Go deeper on this topic:

The worldwide shutdowns that came with the first months of the COVID-19 pandemic caused greenhouse gas emissions to plunge. Scientists warned that the effect would be temporary, and even with a limited relaxation of lockdowns, emissions are shooting back up as if the lockdowns never happened.

This week, the International Energy Agency published what should be an influential global blueprint for a green recovery. Wind and solar power should be a top focus, the report advised, alongside energy efficiency improvements to buildings and industries, and the modernization of electricity grids. At the same time, IEA director Faith Birol warned that “this year is the last time we have if we are not to see a [post-COVID] carbon rebound.”

An optimistic new analysis from climate policy think tank Energy Innovation suggests that, with renewable energy costs plunging, the US should be able to achieve 90% clean electricity by 2035—at no extra cost. Also this week, Goldman Sachs predicted that investment in clean energy will surpass oil and gas for the first time in 2021, and will keep growing over the next decade.

Rideshare service Lyft this week became the latest large company to announce a major clean energy goal, with a commitment to achieve 100% electric vehicles by 2030, and Tesla saw their stock surge as they get ready to rev up their electric semis.

It’s not the first time things that harm our health have been marketed as safe. Remember the tobacco industry ads with doctors promoting cigarettes? Instagram users are familiar with “influencers,” photogenic aspiring celebrities whose endorsements of fashion lines or outdoor gear are worth big bucks to their corporate sponsors. Now, fossil fuel companies are paying influencers to make eyes at the camera while lighting up their gas stoves. Mother Jones comments: “Gas stoves expose tens of millions of people in the United States to levels of pollution so high that they would be considered illegal outdoors... lifestyle bloggers are building their healthy, clean-living brands on one of the most dangerous home appliances on the market.”

Show up for the Movement for Black Lives. This weekend, tens of thousands will continue to rise up across the continent to defend Black lives. Friday is Juneteenth - the annual commemoration of the day in 1865 when the last remaining American slaves were liberated.

If there’s not an event near you, or you are not able to attend an event in person, you can also: