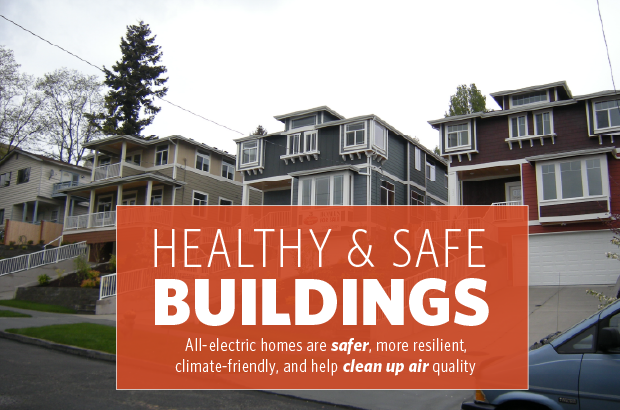 I live in Shoreline, Washington, and I’m thrilled to say that on Monday, Dec. 6, our City Council voted to approve an ordinance that eliminates most uses of fossil fuels for space heating and hot water in newly constructed commercial buildings, as well as multifamily buildings that are four stories or taller. That’s a mouthful, but with this vote, Shoreline became the second city in the Pacific Northwest region to adopt a policy that will accelerate the transition to clean, safe, all-electric buildings.

Earlier this year in February, when I learned that Seattle had been the first city in Washington to adopt a similar policy, I immediately thought of all the new multifamily buildings being constructed around me. With a light rail station slated to open in Shoreline in 2024, our city is preparing for the inevitable population boom resulting from a high-speed connection to Seattle’s busiest urban centers, the downtown business district, and even the airport. Wouldn’t it be incredible if all those new, big multifamily and commercial buildings were built to be clean and all-electric, instead of relying on fossil fuels for space and water heating?

Personally, I’ve been amazed and intimidated by the impacts of climate change I’ve witnessed from my home in Shoreline over the five short years I’ve lived here. Heat waves and wildfire smoke and “snowpocalypse” easily come to mind, but to be honest, it’s the gradual, inevitable shift towards hotter summers that has me worried for my community. The people most at risk of heat-related health impacts are folks without access to air conditioning in their homes: low-income residents, particularly those who are bedridden or unable to access cooling centers, and people living in older buildings. To keep our most vulnerable residents safe in future extreme weather events, we need to treat electric air conditioning as a necessity, especially when building new homes.

While emissions from electricity and transportation are declining, emissions from buildings in Washington are growing at a faster rate than any other source of emissions, largely due to the use of fossil fuels for heating, cooling, and cooking. Most disturbing to me is that extracting and burning gas to heat our buildings also dramatically impacts our outdoor air quality. Washington buildings that use gas for heat and power release twice as much NOx into outside air as power plants do. Yikes.

Clearly, we have to stop baking fossil fuels into the lives of our future community members. We need our new buildings to be all-electric, and we need local action to make this happen. Cities and counties in Washington can pass regulations on new commercial and large multifamily buildings through their commercial energy codes. When it came time for public comments for this ordinance at the November Shoreline City Council meeting I was prepared to speak up.

I voiced my support for the ordinance along with my Shoreline neighbors and others speaking on behalf of Stand.earth’s SAFE Cities movement, Seattle 350, Shorecrest High School's Climate Justice Club, and of course Climate Solutions. Each person who supported Shoreline’s action on clean buildings gave me more hope. It was surprisingly easy to make the case for clean buildings to our Shoreline City Council, and I think we’ll see more cities in Washington and Oregon use this policy tool to reduce emissions, support their climate goals, and promote cleaner, healthier environments for residents.

As momentum builds behind the nationwide building electrification movement, several more of these policies are in progress among local governments throughout Washington and Oregon.

It’s amazing to see local action lead to tangible impacts on our climate, health, and safety. Anyone, even new climate advocates like me, can help our cities and counties to realize that we have the power to stop making this problem worse. If we keep constructing buildings which rely on gas, we’ll be locking in those buildings for another 50 years of fossil fuel use. I’m so grateful to my Shoreline City Council for their leadership in passing an ordinance this year which will help protect our most vulnerable neighbors, and accelerate the transition to clean, all-electric buildings. 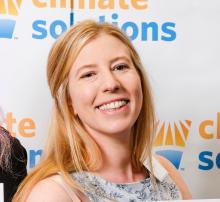 Ariana helps people make the world a better place by designing and delivering digital solutions. She has a deep background integrating nonprofit technology systems and enjoys working with people to solve business challenges. By day, she manages the design and maintenance of the Salesforce CRM database and online engagement platforms for Climate Solutions. By night, she dances and bakes and enjoys life in the Pacific Northwest.