Renewable energy costs have decreased significantly over the past several years as solar prices dropped dramatically.  These cost decreases and the resulting uptick in investment and acceptance are beginning to have a wide-ranging impact on electricity markets, utilities, and regulations. In this post, we highlight the economics driving the decrease in solar costs and the implications for decarbonizing the United States’ electricity grid.

The Cost of Solar Energy

Solar energy costs have been declining steadily and meaningfully over the past 25 years.  But only recently has the cost reduction and competiveness with other energy sources had a more meaningful impact on planning, regulation, and investment.  As a starting point, the chart below shows the decline in solar photovoltaic module cost and the annual installations from 1976 to 2015. 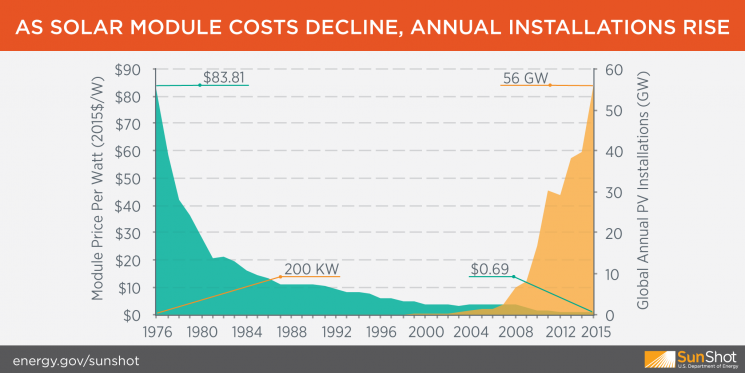 The relationship between the increase in modules produced and price has been roughly constant with a 20% decline in price for every doubling of units shipped.  This relationship is often referred to as "Swanson's law" after Richard Swanson, the founder of SunPower Corporation.  In fact, the experience curve is not unique to solar and has been observed in many industries since the 1930’s. For photovoltaic modules, the experience curve effects have translated into about a 10% decline in price every year.

Modules, however, are just one component of total solar energy costs.  It is also instructive, and more relevant to look at installed costs and Power Purchase Agreements (PPAs).  Utility-scale solar (projects larger than 5 MWac[1] in capacity) have led capacity additions over the last five years and represent the lowest cost solar energy.  According to analysis done by the Lawrence Berkeley National Laboratory (LBNL), median installed utility PV prices have fallen nearly 60% since the 2007–2009 period to $2.7 Wac for projects completed in 2015, with the lowest cost projects around $1.7 Wac.   (See Figure 2)

The LBNL analysis also shows a substantial decline in levelized PPA costs.  These long-term purchase agreements capture the cost of installing, operating, and maintaining utility-scale solar projects, as well as the impact of tax credits.  Prices as recently as 2011 of $100 MWh were common.  In 2015, most PPAs were priced at or below $50 MWh levelized, with a few priced near $30 MWh. (See Figure 3) 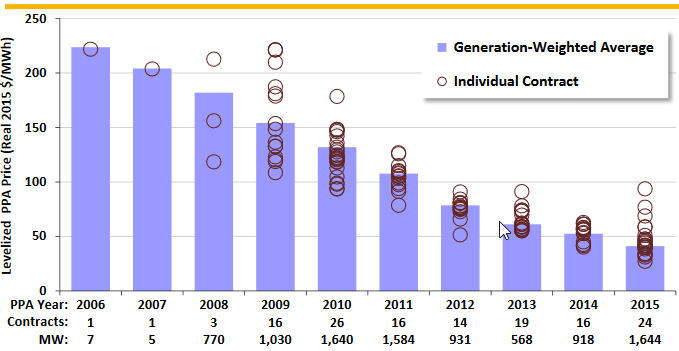 Prices for commercial (non-utility scale) and residential installations are not as competitive as utility-scale projects but have also seen significant declines in installed prices.  According to the LBNL analysis, installed costs for non-utility scale installations fell 6%-12% per annum from 1998 to 2015.  From 2014 to 2015 residential median costs declined by 5% and non-residential median costs declined by 7–9%, depending on size. (See Figure 4) 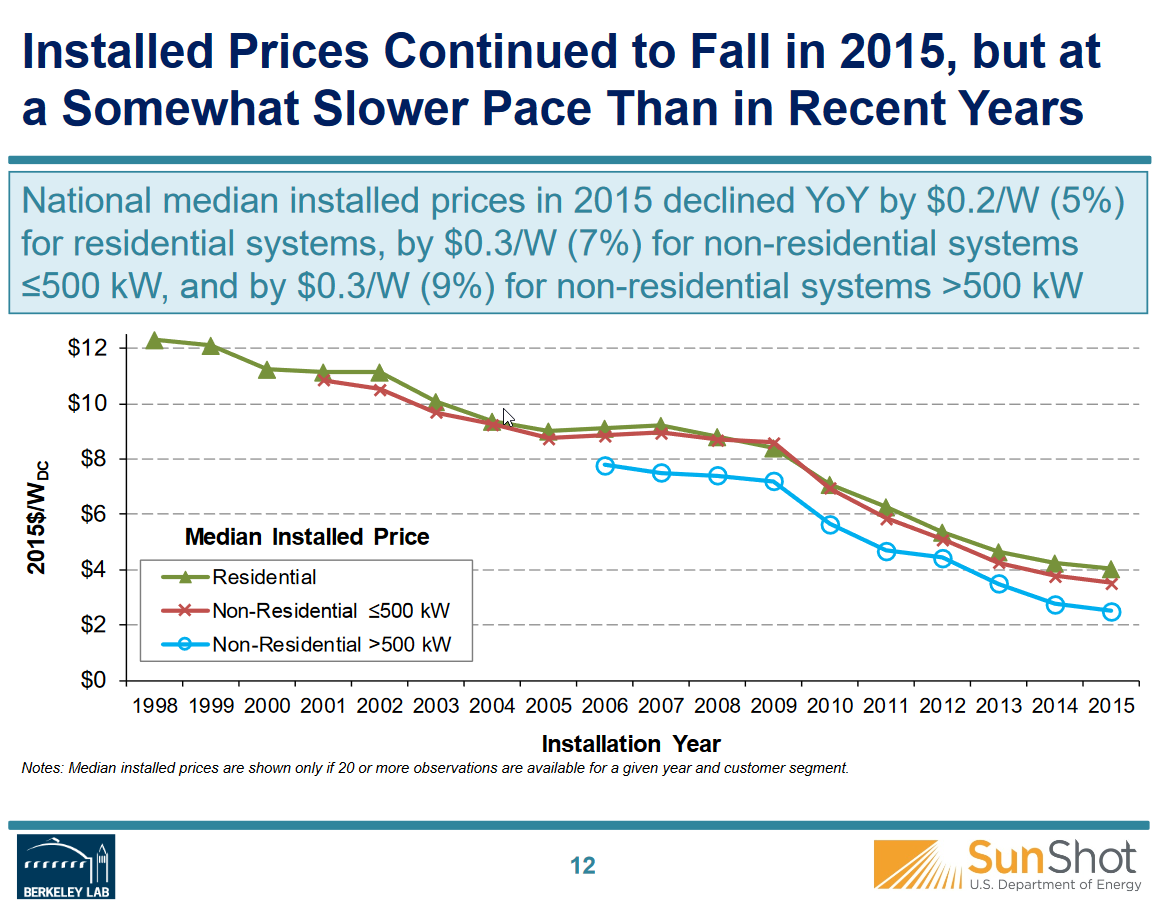 The falling costs of solar, coupled with the recently extended Investment Tax Credit (ITC), are driving massive amounts of new investment is solar.  According to a report from GTM Research and data from the Solar Energy Industries Association (SEIA), 1,665 Megawatts (MW) of solar PV was installed in the US in the first quarter of 2016 and 2,051 MW in the second quarter of 2016.  Notably, this capacity represented 64% of total generating capacity added in the first quarter and was more than gas, coal, and nuclear combined.  For the first half of 2016, solar accounted for 26% of total generating capacity installed. This follows a record 7.5 GW of solar PV installed in 2015 and represents 19% growth over 2014 and a 58% compound annual growth rate since 2010. (See Figure 5) 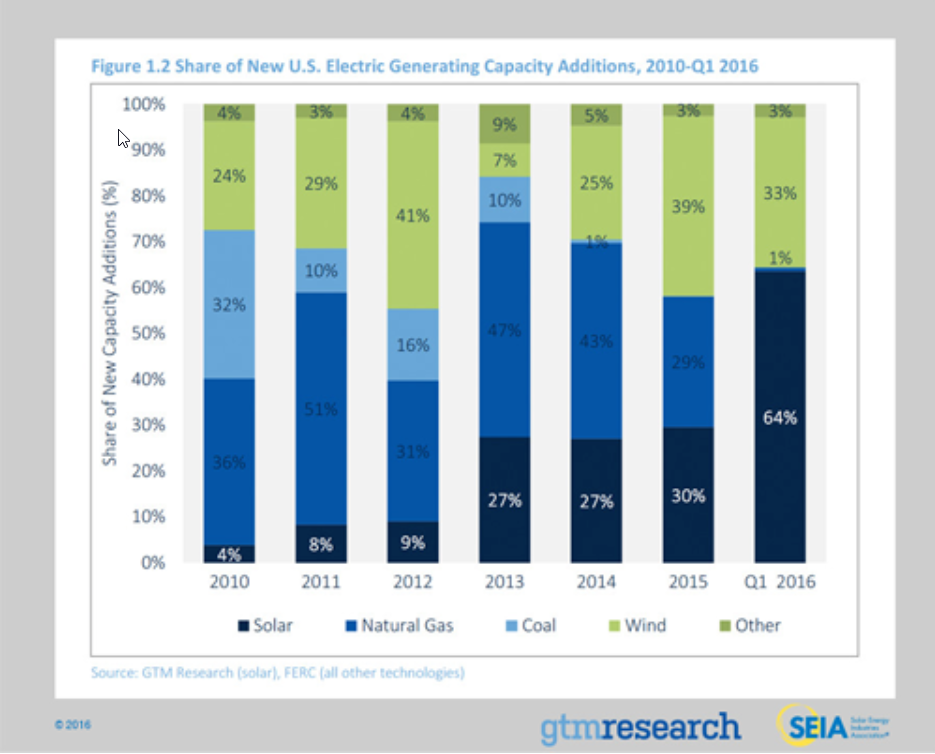 According to the report, utility-scale PV is expected to drive the majority of demand in 2016, accounting for nearly three-fourths of new capacity.  More than 10 GWdc of utility PV is slated to come on line this year.  At least another 4.5 GWdc of utility PV installations are expected to be nearly or fully finished with construction in the fourth quarter of 2016 and official commercial operation expected in 2017.

So what impact does the fall in prices and resulting increase in installed capacity have on utilities and electricity markets?  First, in some markets the competiveness in pricing relative to gas and coal is causing planners to consider solar as the lowest cost option for adding generating capacity to the grid.  Earlier this year ERCOT, the Texas grid operator, released an updated Long Term System Assessment that evaluated transmission system needs for the next 15 years.  Across all eight scenarios, the assessment concluded that most capacity additions were solar, totaling from 14,500 MW to 28,100 MW.  Solar is expected to increase from about 3% today to roughly 17% of total capacity by 2031, with solar capital costs the main driver of the increase in solar capacity.

Falling utility-scale PV costs are also driving utilities to invest directly in more solar projects.  Utility Dive reports that utilities, through their unregulated independent power producer (IPP) subsidiaries, already own 50% of operating utility-scale solar and are on track to account for 50% or more of what will come on line in the next 18 months.

According to a recent KPMG survey of executives in the power and utility industry, 67% of executives cited scale and growth of renewable technologies as the top disruptive trend shaping the sector. In fact, 62% of executives estimate that the U.S. will have a renewable footprint of 50% by 2045 or sooner.

Utilities are also beginning to grapple with large customers defecting from the grid and the potential for non-utility companies to sell renewable power directly.   Last year, Apple entered into an $850 million 25-year purchase agreement for 130 MW of electricity with First Solar in what was at the time the largest ever non-utility solar procurement.  In August, Apple was granted the authority to sell excess electricity generated by its solar farms into the wholesale market, motivated by cost and reliability, as well as the objective to promote renewable energy.

In July, MGM completed one of the largest rooftop solar arrays on the roof of the Mandalay Bay Convention Center in Las Vegas.  The solar array is expected to produce 6.5 MWac of electricity and supply up to 25% of the facility’s peak electricity demand.   The availability and cost of solar and renewables in general, along with the desire to respond to customer demands for environmentally sustainable destinations, caused MGM to exit Nevada Power service, paying a fee of $87 million.

The fall in solar costs and the resulting increase in deployment have been remarkable, but significant challenges exist in reaching the solar penetration levels needed to decarbonize our electricity grid.  The US Department of Energy estimates that solar’s unsubsidized levelized costs need to fall an additional 40%-50% to be competitive with current fossil fuel costs.

As part of the their Sunshot Initative, in May 2016 the Department of Energy released a series of insightful reports detailing the key barriers and opportunities that solar faces in achieving cost parity. 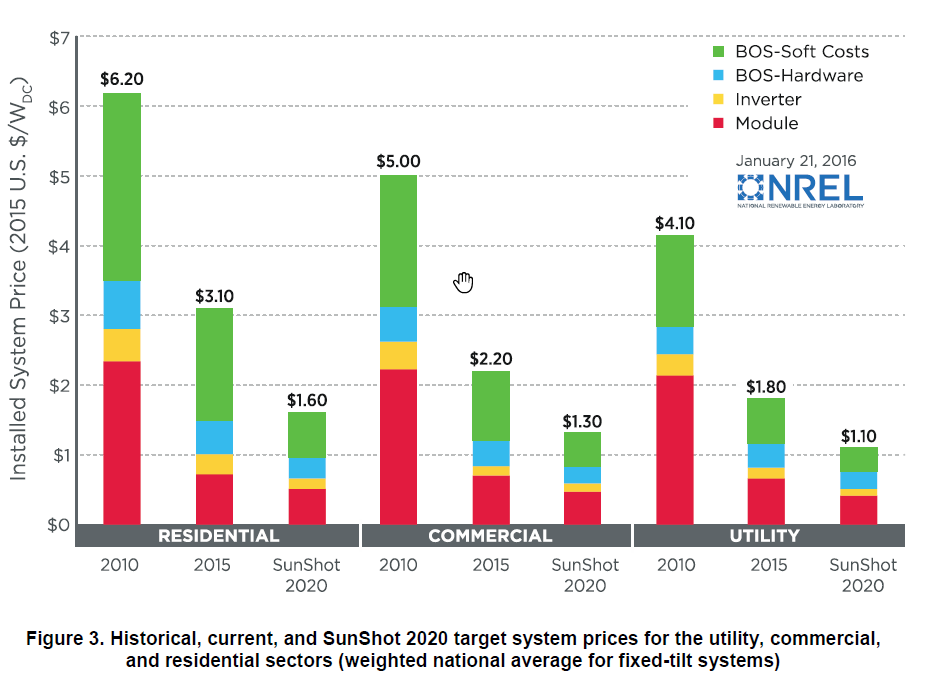 In summary, the reports highlight the following challenges:

Cost reductions and the resulting increases in installed capacity are enabling solar to become a competitive source of electricity on the US grid.  The ITC has contributed significantly to the increase in capacity and allowed cost parity with fossil fuel sources in some markets. Extending the ITC for five years at the end of 2015 has given the market near term policy certainty and is expected to contribute to the continued robust pace of solar development.  If history is any guide, prices will continue to fall as capacity increases.  As the Sunshot studies indicate, cost parity on an unsubsidized basis is achievable by the end of the decade.

While the trend of increasing solar installations is positive, the near-term path may be volatile.  The somewhat unexpected ITC extension at the end of 2015 caused a spike in utility scale projects in 2016 as developers rushed projects into construction. The five-year extension may now cause other projects to be delayed.  In the residential market, continued growth will be impacted by state and utility level decisions on the value of solar and net metering. 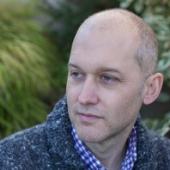