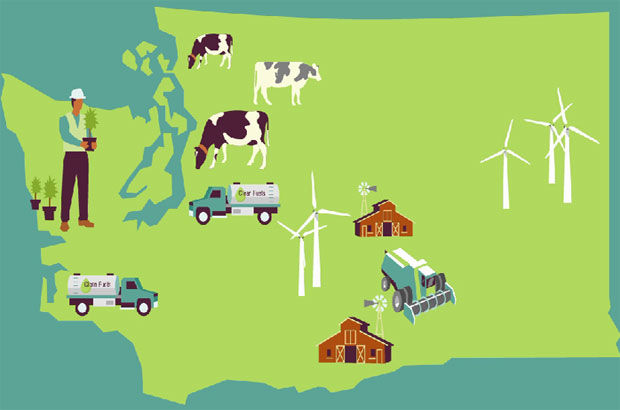 a joint statement from Climate Solutions and Audubon Washington

On the second day of the 2019 Legislative Session, the House Environment & Energy Committee held a hearing on HB1110, a bill which would reduce the carbon intensity of fuels in Washington, addressing global warming, and reducing impacts to public health through a Clean Fuel Standard.

“A Washington clean fuel program will provide a reliable source of support for the cleanest transportation technologies, and can adapt as new technologies come to market,” stated Jeremy Martin, director of fuels policy and senior scientist, Union of Concerned Scientists. “Whether it is private cars, transit agencies, delivery fleets, or self-driving taxis, a clean fuel program supports clean transportation and provides more support to the cleanest options. It’s a smart technology-neutral policy that will help move Washington toward a clean transportation future.”

A Clean Fuel Standard, HB 1110, would require oil refiners and importers to reduce the carbon intensity of fuels by 20% by 2035, supporting expanded transportation electrification, and creating more homegrown jobs in the production of clean, low-carbon fuels.

The hearing included testimony from a diverse group of voices in support of the bill. Business leaders in the clean fuels and electrification sectors, health professionals, and other members of communities affected by global warming focused on increased investments in the local statewide economy that would result from passage of HB1110. Many businesses highlighted how Washington State is missing out on a clean fuels market compared to British Columbia, Oregon and California which each have a clean fuel standard in place. These businesses also stated that passage of HB1110 would encourage development from the renewable energy sector resulting in job growth and new investments.

Carrie Nyssen of the American Lung Association highlighted how critical reducing air pollution is to public health stating, “Breathing isn’t an option...what we breathe in matters, especially to our children and our elders. Maintaining and ensuring that we have clean air to breathe takes many different strategies and policies. HB 1110 is one of those policies...We don’t get to choose what air we breathe, but we do have a choice about what we put into that air. We’re already paying for air pollution through insurance premiums, lost productivity, and premature deaths.”

In addition to the American Lung Association and other leading public health organizations, including Puget Sound Clean Air Agency, view a Clean Fuel Standard as one of the most important ways to improve public health and transition our transportation to cleaner sources.  Diesel and gasoline are the largest sources of air pollution, which health professionals link directly to asthma, lung cancer, and other respiratory diseases. Lower income communities and communities of color who are often closer to major transportation corridors are even more impacted. For example, for those living in the Duwamish Valley, diesel particulate pollution con­tributes to a reduction in life expectancy by thirteen years compared to other parts of King County.

Ryan Calkins, a commissioner for the Port of Seattle who testified on behalf of the port and the NW Seaport Alliance pointed out that the lack of a clean fuel standard in Washington is a lost opportunity for jobs and market creation.  Calkins noted that,:  “Clean fuel sources developed in our state should benefit Washington and the overall health of Washington residents…and support jobs in our.  . renewable energy sector, rather than send those fuels outside our state to California and Oregon.”   The Port of Seattle has adopted aggressive goals to reduce greenhouse gas emissions from its own operations by 50 percent from 2005 levels by 2030 and to be carbon neutral or carbon negative by 2050.

Archive of testimony can be found at:

About Audubon Washington
Established in 1981, Audubon Washington works statewide with its 25 independent chapters and 35,000 members on the conservation of the sagebrush shrub steppe ecosystem in Eastern Washington, protection of coastal estuaries, and actions that address climate change, the number one threat to birds today. Through the Seward Park Audubon Center, it provides science, nature and environmental education programs for youth and families. Learn more at http://wa.audubon.org/, @audubonWA.