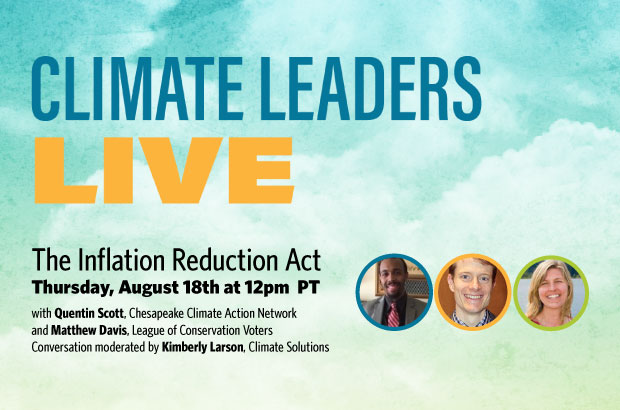 This Climate Leaders Live featured a discussion about the major climate bill that President Biden just signed into law, the Inflation Reduction Act (IRA). We reviewed the climate and clean energy benefits, some good things that didn’t make it into the law, some bad things that did, and what comes next for climate action.

Our guests for the hour were two fantastic D.C.-based climate leaders:

The IRA will slash climate pollution and dramatically accelerate our shift to a clean energy economy, with major clean energy investments that are undoubtedly an enormous step forward. At the same time, the law includes giveaways to the fossil fuel industry, and may lead to continued and new harms to communities on the front lines of environmental degradation—particularly in the Arctic and Gulf Coast.

In just under an hour, our conversation covered:

Passing this law is a big deal, as Matthew Davis from the League of Conservation Voters said:

“The climate movement, the labor movement, the climate justice movement… there is such people power that got us to this point. Thank goodness we got where we got, as the world is watching. This is witnessing world history as far as shifting the U.S.. . .for action on climate.”

Chesapeake Climate Action Network and League of Conservation Voters were two of many organizations whose work helped to shape the IRA (and earlier efforts to turn Green New Deal ideas into law, including last year’s Build Back Better). Both organizations’ advocacy and lobbying, coalition building, grassroots organizing and communications contributed to this accomplishment. CCAN played a particularly significant role, doing local work in West Virginia focused on Senator Joe Manchin. Our guest speakers will share their take on the IRA, what it took to get to this moment, and what’s needed now to maintain momentum.