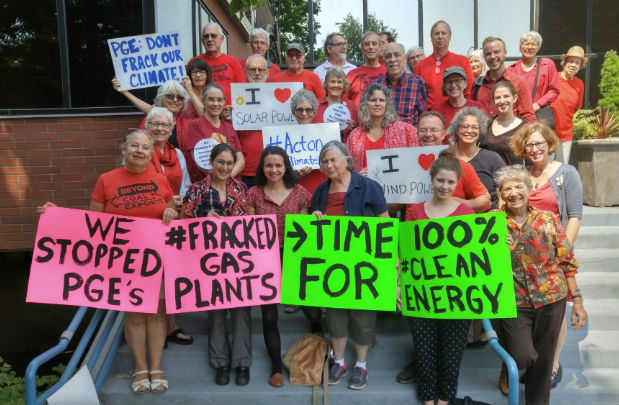 (Salem, OR) – Today, the Oregon Public Utilities Commission (PUC) did not acknowledge plans by Portland General Electric (PGE) to build two new power plants that burn fracked gas at the Carty Generating Station near the site of a retiring coal-fired power plant in Boardman, OR.

The decision comes after PGE suspended the proposal in May in response to overwhelming community concerns about the devastating safety and climate impacts of fracking, transporting, and burning fossil fuel gas. Earlier this year, in May, a record-breaking 10,000 comments from the public were submitted to the PUC in opposition to the gas plant proposal. The PUC’s decision delivers the final nail in the coffin for fracked gas infrastructure as part of PGE’s latest Integrated Resource Plan.

“Over ten thousand Oregonians spoke out in opposition to the proposed Carty gas plants, breaking records for public input to the Public Utility Commission,” said Amy Hojnowski, Campaign Representative for the Sierra Club in Oregon. “Between this victory and Oregon’s groundbreaking Coal to Clean law, Oregon communities have made ourselves very clear: we want clean energy, and we want it now. We will continue to work with PGE to ensure that their plans to decarbonize their grid are real and they do the right thing for their customers and for the climate.”

“This is a win for the health of people living near fracking sites and frontline communities experiencing the climate crisis,” said Damon Motz-Storey, Program Assistant for Oregon Physicians for Social Responsibility. “The use of fracked gas accelerates climate change and poses health risks such as toxic fracking chemicals in drinking water. On all fronts we must continue to push for clean, renewable, and just sources for Oregonians’ energy needs.”

“To address the climate crisis, we need to transition rapidly off fossil fuels and increase renewable energy like wind and solar power.” said David Van’t Hof, Climate Solutions Acting Oregon Director. “We commend the Public Utility Commission for recognizing that imperative and rejecting new fracked gas development. We simply can't afford to make the situation worse. We also look forward to continuing to work with PGE and the Commission to secure what Oregonians overwhelming want: our state powered by clean and renewable energy."

“The only known solution to the climate crisis is to stop burning fossil fuels. In the week after an unprecedented heatwave with unprecedented wildfire smoke, we thank the PUC for siding with science to protect life on this planet, and saying no to new fossil fuel power plants,” said Mia Reback, organizer with 350PDX. “Community members are making plans for all of us to end fossil fuels use - youth are suing the US government, individuals are lying in front of oil trains - and it’s time that utility companies join and make their plans for getting off fossil fuels too.”

“Today’s announcement from the PUC is a clear signal that the tide is turning against power generated from fracked gas,” said Dan Serres, Conservation Director with Columbia Riverkeeper. “Oregonians are ready to pursue clean energy, and the PUC wisely avoided committing Oregonians to paying for new fracked gas power plants.”

“Though I do not speak on behalf of our tribe, as a deeply concerned tribal member, I am relieved by the Oregon PUC ruling,” said Cathy Sampson-Kruse, Waluulapum tribal member and daughter of Chief Yellowbird~PeoPeoMoxMox of the Confederated Tribes of the Umatilla Indian Reservation. “I fully understand that electric energy is vital in the world we live in, but we stand strong in our belief that solar and wind energy are the correct path forward. Fracked gas and coal are deep in the earth and bear memories of the past: it needs to stay there, instead of destroying our land, air and precious water; and putting ALL people at risk as it travels and pollutes mother earth. Our people have made our sacrifices: much of our homelands to immigrants, more of our land to Hanford in this century, and the rivers that now bear dams to create power - rivers that can never ever return what they once were.”