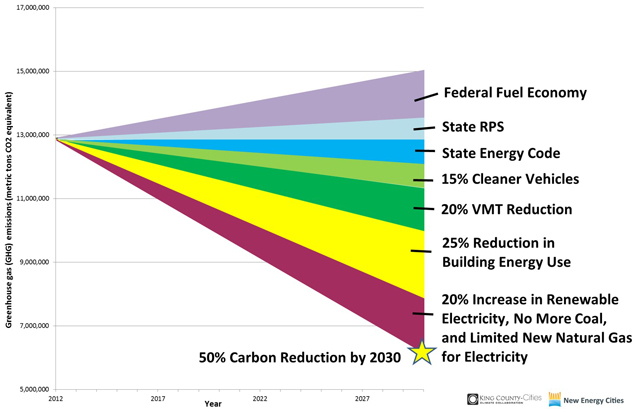 In early 2014, the King County-Cities Climate Collaboration (K4C) asked New Energy Cities to analyze what it would take to achieve meaningful carbon reduction goals at community scale in the near term. As a voluntary partnership of nine cities in King County that share expertise and best practices on carbon reduction, the K4C offers a unique opportunity for the County and partner cities to map individual and shared carbon reduction strategies together.

The bar is high: King County has set a goal of reducing carbon emissions 80 percent below 2007 levels by 2050 (80x50), with an intermediate goal of 50 percent reduction by 2030 (50x30). Five King County cities have adopted the 80x50 and 50x30 goals; Seattle has an even bolder goal of carbon neutrality by 2050.  In July 2014, the King County Growth Management Planning Council, the formal body of elected officials charged with planning for economic and population growth in King County, will consider setting shared near-term regional targets. This is a pivotal moment when local political leadership has stepped forward, and regional targets are on the table for adoption.

To develop a shared carbon reduction work program to achieve meaningful reductions, the K4C first commissioned analysis for the County as a whole, and the contract made New Energy Cities’ services available at a discounted rate for individual member cities. (A slide deck with highlights of the King County work described below is available here.)

To start, New Energy Cities created an Energy Map that depicts a snapshot of community-wide energy consumption and greenhouse gas emissions for a defined base year. This graphic is similar to one we created for other partner cities in the past, including Issaquah, WA, and is based on the national energy flow charts that Lawrence Livermore National Lab creates annually.

New Energy Cities then conducted a Carbon Wedge analysis to outline potential pathways of strategies to achieve the 50x30 goal. Inspired by Princeton University’s Carbon Mitigation Initiative, we developed this community-level framework in conjunction with the City of Issaquah, WA, and later revised it with the City of Beaverton, OR.

Second, we calculated the carbon reduction associated with strategies in transportation, building energy efficiency, and renewable energy supply, consistent with national best practices. We looked at achieving the 50x30 target through three different pathway scenarios—one with greater emphasis on reducing vehicle miles traveled (VMT), one with greater emphasis on increased building energy efficiency, and one with a balance of the two.

Based on a range of sources, including Stockholm Environment Institute’s Getting to Zero report for Seattle and Nelson\Nygaard’s transportation analysis for the Seattle Climate Action Plan, and in consultation with local subject matter experts, we identified the following combination of ambitious but feasible targets that would add up to meet the 50x30 goal:

The solutions are mathematically straightforward, but they do require hard work and deep partnership among the County, cities, energy utilities, transportation agencies, building community, and nonprofit service organizations.

Leading the way, Issaquah and Shoreline city staff are already in the process of prioritizing and selecting strategies for near-term implementation, and other K4C members are not far behind. The bottom line is that the 50x30 goal is ambitious but achievable, with sufficient community engagement, business support, political will, and staff commitment.