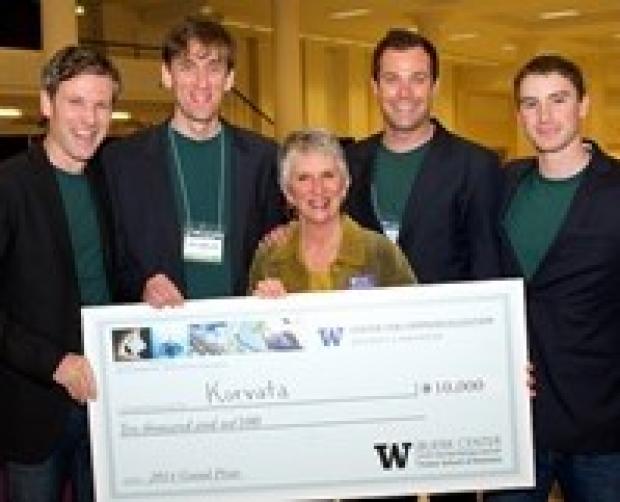 Interdisciplinary teams of engineers, chemists, business developers, and law students filled the Seattle Center Exhibition Call to present their combined efforts in a showcase of start-ups aimed at environmental innovation. My colleague Chris Bast and I attended as judges for the University of Washington Environmental Innovation Challenge (EIC) on April 3.  The brainchild of Pam Tufts at the UW’s Buerk Center for Entrepreneurship, the EIC challenges students to define an environmental problem, develop a solution, produce a prototype, and create a business summary that demonstrates the commercial viability of their product, process, or service.

23 teams were selected to compete in the final round of the 2014 UW EIC. Each of these teams proved that students have the potential to address our most pressing environmental needs like alternative fuels, recycling, solar power, and water treatment with novel solutions that have market potential. After pitching their innovations and demonstrating prototypes to a group of more than 170 judges, including many in the Puget Sound clean tech sector, the six teams with the highest scores were awarded up to $10,000 in prize money.

Grand prize winner Korvata began their project just four months ago. A guest presenter from a multinational food service company spoke to a group of MBA students at the UW Foster School of Business. He lamented the fact that nitrous oxide chargers for aerosol whip cream are high among his firm’s GHG emissions culprits. In fact, nitrous oxide is a greenhouse gas 300 times more potent than carbon dioxide, and there is presently no commercial alternative.

The Korvata co-founders sat up and listened to this problem. They were inspired to provide a solution – the word korvata is Finnish for substitute. The co-founders brought start-up and marketing experience to the table and then recruited a senior scientist to lead development of their product. They sought and recruited MBA classmates with experience and skills relevant to the challenge in addition to industry-expert advisors. The team successfully developed a new mixed gas substitute for aerosol whip cream with 50% lower emissions than nitrous oxide and created a business plan. The next task is to bring the innovation to market.

All of the Environmental Innovation Challenge teams looked hard at seemingly intractable problems, from reducing packaging waste, to finding new paths for recycling, to creating new renewable energy systems. Their solutions are uniformly thoughtful and creative, and several teams are poised to make a run at changing the world for the better. I can’t help but be a little more optimistic leaving an afternoon meeting with 100 student scientists and entrepreneurs, all eager to -and capable of- solving environmental problems.