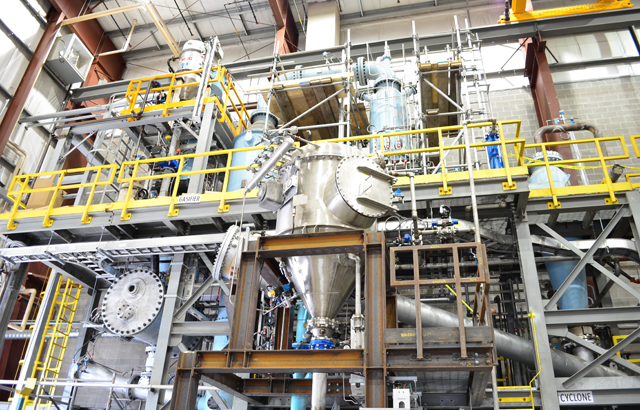 Too dirty to recycle? Turn it into motor fuel
Clark Gilman
March 31, 2014

Back in the 1990s, when recycling was just getting a toehold in public awareness and the U.S. was dealing with a shortage of approved landfills, waste-to-energy plants were the bane of environmental activists. Power plants fueled by garbage would chain a community to a throwaway lifestyle, they argued, through a decades-long commitment to stoke the boilers with burnable trash.

Fast-forward 20 years, and waste-to-energy is breaking free of that stereotype. The new generation of projects to turn garbage into fuel is designed to complement recycling and composting, not displace them. Instead of simply incinerating mixed garbage, they function as “biorefineries” to transform hard-to-recycle trash into liquid fuels and other chemicals.

Several initiatives are moving forward that would convert municipal solid waste (MSW) to liquid fuel or useful industrial chemicals. Enerkem, a Canadian company, has built a biorefinery in collaboration with the City of Edmonton and Alberta Innovates – Energy and Environment Solutions. When fully operational, it will have an annual production capacity of 38 million liters (10 million gallons), made from 100,000 tons of the city’s waste that the city would promise to provide for the next 25 years.

The plant would help the city reach its goal of 90 percent diversion of waste from the landfill. Sixty percent of the city’s waste is already composted or recycled. The biorefinery will take another 30% of the waste stream—mainly textiles, non-recyclable cardboard and paper, wood residues, and non-recyclable plastics like food packaging—leaving just 10% of the municipal solid waste bound for the landfill.

Even if the city’s waste stream diminishes, the Edmonton facility could run on agricultural or forest residues as well as waste. In fact, the Enerkem process has been tested successfully on 25 different feedstocks such as wood chips, wheat straw and sewer sludge.

These waste-digesting biorefineries are fundamentally different from standard trash-fired power plants, which have been the target of a number of lawsuits. Concerns center on particulate emissions and a combustion process that creates new nasty pollutants, such as dioxins. 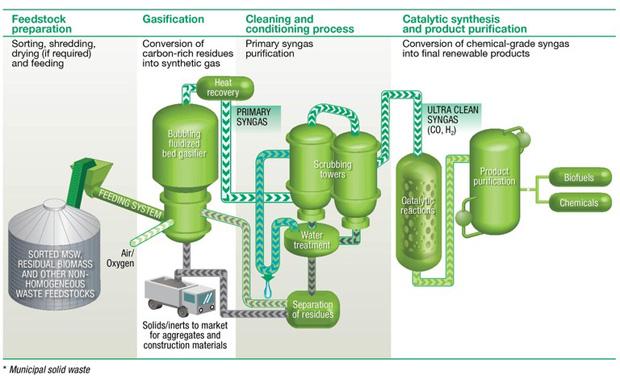 But in the case of the Enerkem model, the garbage is heated at low temperature in sealed vessels to gasify it, breaking down the molecules into carbon monoxide and hydrogen gas, which are then reassembled into other compounds using metal catalysts. The US Department of Energy conducted an Environmental Assessment of the Enerkem process as part of one of the firm’s other projects in Pontotoc, Mississippi, which found that estimated emissions from plant operation are below the thresholds for regulation. In fact, according to the DOE study, delivery trucks going to and from the facility posed the largest air-quality concern.

In contrast, the biorefinery process has attracted attention for its positive environmental features. The California Air Resources Board conducted a life-cycle assessment that showed that MSW-derived cellulosic ethanol is potentially carbon neutral. What’s more, the same thermochemical process could be used not only to produce ethanol, but also to yield substitutes for petrochemicals used in manufacturing.

Although Enerkem has backing from a consortium that includes Waste Management and Valero and is already running a demonstration-scale municipal waste biorefinery in Quebec, the industry is still in its infancy. Like any emerging industry there will be breakthroughs and dead-ends, and it’s hard to predict every consequence of a new industrial process.

But environmental watchdogs and international stakeholder processes such as the Roundtable on Sustainable Biomaterials are holding emerging fuel pathways to a rigorous environmental impact standard, which offers hope that they will be environmentally friendly — especially in comparison with the extraction and combustion of climate-changing fossil fuels.