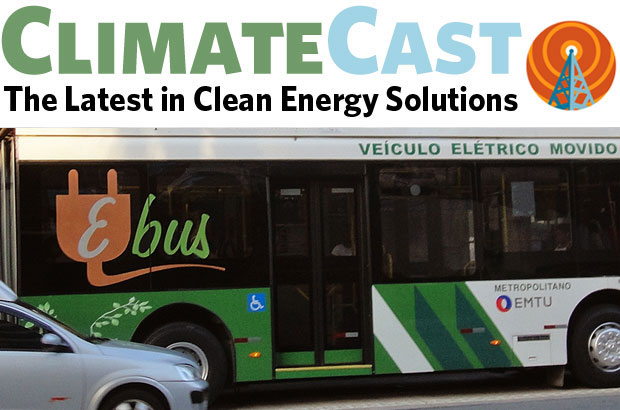 Buses driving into the future with electric fleets

There’s a lot of buzz right now around the electrification of buses, and it’s easy to see why. Electric buses emit virtually no air pollutants or greenhouse gases, and are increasingly affordable. E-buses can already be cheaper than diesel over the life of the buses because they cost significantly less to power and maintain. Electrification of transit bus fleets is starting to take off, with transit agencies in Los Angeles, Seattle, and New York committing to transition to 100% clean buses, and others starting to buy electric - including in Washington D.C., Chicago, Louisville, Albuquerque and more. Late last month, Paris announced plans to bring 1,000 electric buses onto roads as part of a city-wide effort to eliminate greenhouse gas emissions from public transportation. Environment Oregon released a report highlighting the important role buses play in US transportation infrastructure -- and how damaging diesel buses are to our health, our communities, and our climate. The potential for buses (and trucks) to go electric is particularly important given the transportation sector's enormous contributions to global warming.

Clean energy has become a significant part of US power generation, and thanks to low costs and solid commitments to transition to a clean energy economy, all indications point to that trend increasing.  Wind and solar were responsible for 98 percent of new US power capacity at the beginning of this year. The US recently moved up to second place, after China, as the most attractive energy market in the world for renewable investment. The Los Angeles City Council is working to create a department responsible for overseeing greenhouse gas reduction levels citywide, including expanding clean energy infrastructure. New York Governor Cuomo announced plans for a significant expansion of the state's efficiency goals -- including $36.5 million in clean energy job training investments. And Minneapolis just became the largest Midwestern city - and 65th in the country - to commit to using 100% clean energy.

How to achieve even the most ambitious of climate targets

David Roberts’ recent column in Vox outlines a very ambitious but possible plan for how we can reduce climate emissions and potentially even meet the reduction target of limiting global warming to 1.5 degrees Celsius. His proposal is particularly urgent given that earth’s atmospheric concentrations of CO2 hit 410 for an entire month for the first time. Roberts calls for radically increasing energy efficiency and renewable energy use, while also electrifying everything that runs on fossil fuels today. He also recommends pursuing viable decarbonization projects, including removing existing CO2 from the atmosphere, but is also skeptical of relying on CO2 removal strategies given the lack of a commercial industry. A rapid and dramatic transition to a clean energy economy remains the primary solution.

Are we now living in [fill in your favorite environmental disaster movie]?

A new US-British Antarctic mission is studying Antarctica’s Thwaites glacier, a glacier the size of Florida that drives as much as four percent of global sea-level rise and could flood the world’s coastlines in our lifetimes. For the landowners of properties already submerged by sea level rise, the legal and financial questions of who owns and who should restore the land are leading to lawsuits in some Southern and Gulf states. Melting of sea ice in the Bering Sea is hurting Alaskan coastal communities that are reliant on this ice cover for navigation and hunting, two economic mainstays. The states expected to take the biggest economic hits from climate change are Florida and Texas -- losing over $100 billion each in GDP. Meanwhile, the highest April temperature ever recorded on earth happened last week in Pakistan, at 122.4 degrees Farenheit.

More Pruitt problems at the EPA

A new study has concluded that the EPA is on the verge of regulatory capture, serving the entities it is meant to regulate and making decisions based on industry priorities rather than public interest. The states aren’t having it: Seventeen states, including Oregon and Washington, are suing the EPA for its latest effort to rollback auto emissions standards. Calls for Pruitt to step down have become widespread and bipartisan amid at least eleven federal investigations and far reaching accusations of corruption.

For more perspective on the EPA, we hope you can join Climate Solutions to hear from former EPA administrator Gina McCarthy at our 10th annual breakfast and 20th anniversary celebration tomorrow in Seattle.

In brief: you can now see China’s solar boom from space

While China is the world’s biggest emitter of climate pollution, it is also leading the world on clean energy, investing $133 billion in clean energy technologies last year. Time lapse videos from NASA shows China’s solar energy footprint growing so much that you can now see their efforts from space.