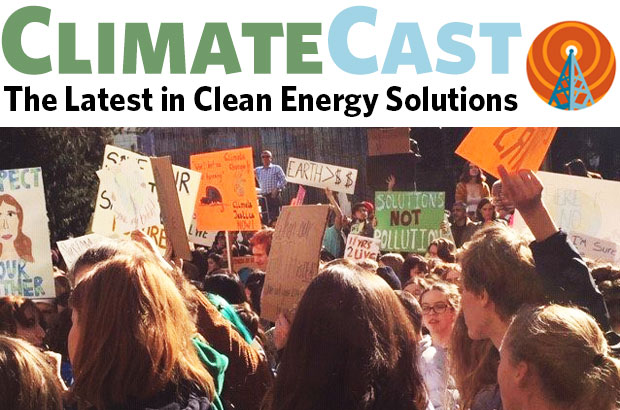 All across the globe, youth #climatestrike for their future

On Friday, March 15, more than one million students walked out of school to protest inaction on climate change. Students across the world participated, from Australia and New Zealand, to Asia, Europe, Africa, North America and South America. According to organizers, there were more than 2,000 protests in 125 countries. With a mix of witty and sobering protest signs, students came together to plead for their future and urge adults to act now, before it’s too late. In Oregon, nearly 2,000 students gathered outside Portland City Hall, while hundreds of others rallied in cities across the state, including in Bend, Salem, Eugene, Corvallis, and beyond. In Washington, students participated in Seattle, as well as Kingston, Poulsbo, Bainbridge Island, Bellingham, Wenatchee, and Spokane. The climate strike concept began with Greta Thunberg, a Swedish student who, frustrated with the lack of government action on climate change, launched Friday school strikes for climate last year. Thunberg was recently nominated for a Nobel Peace Prize for her activism.

New Mexico’s legislature has passed a 100% clean electricity bill, and the governor plans to sign the bill as quickly as possible. It commits the state to zero-carbon electricity from public utilities by 2045, with interim renewable energy targets of 50 percent by 2030 and 80 percent by 2040. In Washington State, the House of Representatives passed a Clean Fuels Standard bill, moving the state closer to implementing a policy that would grow the state’s market for low-carbon fuels and reduce pollution from the transportation sector. As Washington considers its own 100% clean electricity bill, a Hawaiian legislator and climate expert urged the Evergreen State to commit to join Hawaii in committing to 100 percent clean energy. In Oregon, the Clean Energy Jobs bill to limit and price pollution from Oregon’s largest emitters is awaiting amendments; Metro Councilor Juan Carlos Gonzalez, a Medford-area vintner and a Willamette Valley forestland manager all urged support for the legislation in local papers.

US energy storage broke records in 2018, delivering record deployments thanks to both an increased demand for smaller-scale batteries in residential and commercial sites, and utility-scale projects. Energy storage is expected to double in 2019 and triple in 2020, propelling energy storage into grid planning conversations around the country. In energy efficiency news, Fannie Mae found that upgrades like energy-efficient light bulbs, low-flow toilets and efficient heating and cooling systems cut the utility bills of 550,000 renters over the last six years, creating $72 million in annual savings. On average, renters saved about $145 per year, and landlords saved $33 million. Washington State is considering the Clean Buildings Act, a law that would create a performance standard for new and existing large commercial buildings, and incentivize early efficiency gains. Elsewhere in Washington, plans are in the works for a new solar farm in Klickitat County near the Columbia River. Once completed it will be the largest project of its kind in Washington state, covering 1,800 acres.

A new study spanning six years found a racial gap between who causes air pollution and who breathes it. While air pollution is largely caused by white Americans' consumption of goods and services, blacks and Hispanics bear 56 and 63 percent more air pollution, respectively, than their consumption causes. An NPR study has found that disasters such as floods from hurricanes exacerbate income inequality. While the federal government spends billions annually to help communities rebuild and prevent future damage following federal disasters, white Americans are likely to gain wealth after a disaster, while minority communities become poorer. In other news, climate disasters and impacts are fueling extremism across the world: As people struggle to provide for their families, they become increasingly are vulnerable to the influence of extremist recruits who offer them work and food.

Exxon and Chevron, the world’s two largest oil companies, plan to dramatically increase their activity in West Texas to extract close to a million barrels of fossil fuels per day each in the Permian Basin by 2024, even as other companies cut back. A new report from New York University Law School has found that the Trump administration's efforts to undo greenhouse gas reduction rules would lead to a rise in annual emissions of more than 200 million metric tons by 2025 and cause thousands more American deaths. An investigation by the Government Accountability Office found that the federal government is doing a worse job managing climate change under the current administration.

Reaching a point of no return?

United Nations Environments' sixth Global Environment Outlook report paints a dire picture of our planet’s future unless we swiftly and drastically reduce emissions and cut pollution. The report projects increased environmental problems stemming from “unsustainable global human activities” will interact with one other to increase dangers for people , and found that even if we stopped emitting carbon today, the Arctic would continue to get hotter and may become ice-free during the summer as soon as 2030. However the report also found there is still time to act, but the window to do so is closing quickly.

Earth’s carbon dioxide levels just reached a new record high, as February’s average carbon dioxide measurement was 411.66 parts per million, a surprising finding as carbon dioxide levels typically peak in May. Forests in the American West may be reaching a tipping point, as climate change reshapes what types of trees can grow and thrive there. The region may become inhospitable for some native pine and fir forests to regrow after wildfires, notable as 2018 was California’s worst ever year for wildfires, and wildfires are projected to get worse. In Australia, climate change-fueled droughts, heatwaves, rising temperatures and bushfires are driving forest ecosystems towards collapse. Underwater temperatures are increasing as well, as the occurrence of marine heatwaves has grown substantially over the past three decades, killing underwater wildlife and threatening biodiversity.

In Brief: Two guides to calibrating our optimism

David Wallace Wells’ new book, The Uninhabitable Earth, details, often excruciatingly, the many ways in which climate change is certain to damage our lives, politics and culture as we have known them. As such, he insists that we accept and confront that the baseline of our best-case scenario, looking ahead over the rest of this century, is already quite dire. However, he points out, there is a huge difference between terrible and apocalyptic--and that difference will be defined entirely by the choices we make over the next few years.

In his own forthcoming book, The Snap Forward, futurist Alex Steffen pushes back against narratives of inevitability in our climate future. He writes, “What we have to unflinchingly look in the eye is how much choice we still have. The hard part is not wrestling with how bad things could get–it’s understanding how much responsibility we still have to make things better.”