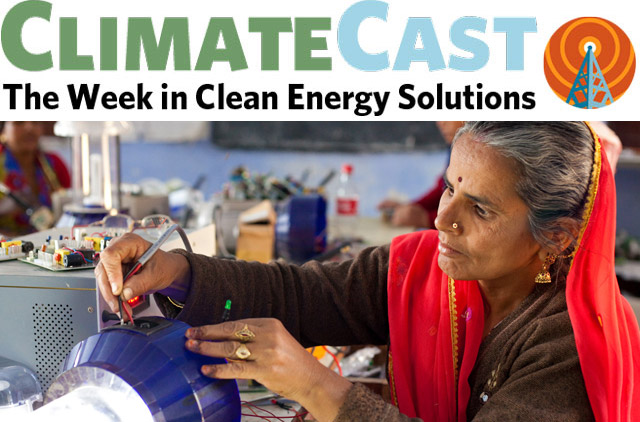 Carbon pricing in the air

Washington Gov. Jay Inslee floated the possibility last week that a state carbon tax could bankroll court-ordered increases in school funding or Republican-backed flood-control projects. In other carbon pricing news, Chile became the first South American country to tax carbon, with a $5 per metric ton charge on power plant emissions to begin in 2018. While Scientific American explored carbon pricing and Bloomberg endorsed it, the drop in Australian clean-energy investment underscored its importance: in the wake of the carbon tax repeal Down Under, Aussie renewable projects sank by 70 percent in the third quarter compared with 2013.

Hey conservatives, can we talk?

Nothing gets the climatoscenti salivating like the prospect of reaching conservatives on climate change. So when psychology experiments showed that correctly packaged climate narratives could move the Fox News set, trackpads clicked merrily, but Grist’s David Roberts scoffed that the real world offers a more challenging environment than the lab. Sightline’s Anna Fahey urged climate activists to empower their audience, instead of using the Madison Avenue tactic of playing on their listeners’ feelings of inadequacy. Taking a long view of partisan politics, the Environmental Defense Fund asked Millennial voters to pledge they’d take account of candidates’ views on global warming, regardless of the politicians’ party affiliation.

While nations dicker, cities get serious about carbon reduction

Los Angeles, Philadelphia, and Houston announced the Mayors’ National Climate Action Agenda to set ambitious GHG reduction targets, while the White House unveiled the Climate Action Champions contest, an unfunded competition designed to assist up to 15 cities both cut carbon emissions and prepare for climate change impacts. The cities are members of the C40, a coalition of the world’s largest cities representing one-twelfth of the world’s population. Last month in New York, the C40 issued a report that quantifies the collective potential for cities to reduce emissions and demonstrates that municipal emission reduction can be additive to national reductions.

A suggestion that climatistas abandon the goal of keeping global warming under 2 degrees C stirred a fusillade of criticism last week. Authors of a piece in Nature derided the 2-degree goal—adopted at the 2009 Copenhagen talks—as infeasible given current emissions trajectories, and imprecise compared to more specific impacts such as high-latitude warming or ocean heat content. But scientists and other commentators riposted that it’s politically obtuse to concede the point this early in the battle for a safe climate, and that if nothing else, blowing past the two-degree goal would provide a clear indication of failure.

Fossil fuel has another hard week

Oregon last week threw out Wyoming’s appeal to approve a dock to ship Wyoming coal overseas, but will still consider appeals from the port and the coal company itself. Coal is looking less and less kingly as demand drops, leading to the token $2 sale of Canada’s Grand Cache Coal, which changed hands just three years ago for $1 billion. In contrast, oil is plagued not by plummeting demand, but by tricky transportation. Tar-sands oil is uneconomical to extract in Alberta unless it can be shipped by pipeline, so the delay of the Keystone XL has bottled up plans to accelerate oil production there. With key energy decisions made at the state level, state legislative elections are drawing a flood of campaign spending.

The first commercial-scale coal-fired plant to trap carbon emissions underground came on line in Saskatchewan with a $1.3 billion price tag and much ballyhoo from proponents, who hail carbon capture and sequester (CCS) as the solution for coal to remain a major player in a carbon-constrained world. The Obama Administration and Congress will surely take note, given the $6 billion in federal government allocations to CCS which is more expensive than wind or solar. To be economically viable, CCS uses the trapped CO2 to extract more fossil fuel from nearby wells, a counterintuitive approach for those working to reduce fossil fuel dependence by increasing renewable energy.

Last summer’s Australian heat wave was almost surely due to global warming, according to research published last week in the Bulletin of the American Meteorological Society, which also linked several more weather disasters to the changing climate. The week also brought new evidence that the oceans are warming faster than previously thought, melting ice caps are tweaking Earth’s gravitational field, and 35,000 walruses are taking refuge on an Alaskan beach for lack of sea ice. In Florida, Miamians prepared to pump ocean water back to sea during the year’s highest tides, and Louisianans debated whether oil companies should be held responsible for delta marshlands sinking beneath the Gulf of Mexico.

President Obama promised $1 billion to boost solar projects in India in a meeting with Prime Minister Narendra Modi last week, which may help realize Modi’s ambitious renewable energy agenda. Rural areas in the global South crave the benefits of electricity, and require appropriately scaled efforts to obtain it, such as this 10-year-old program that trains grandmothers to install and maintain photovoltaic-powered systems in their villages. Such high-touch programs will likely create a warmer feeling than deals like the one announced between Norway and Liberia, in which a rich oil producer seeks to discharge its climate obligation by paying for forest conservation in Africa.