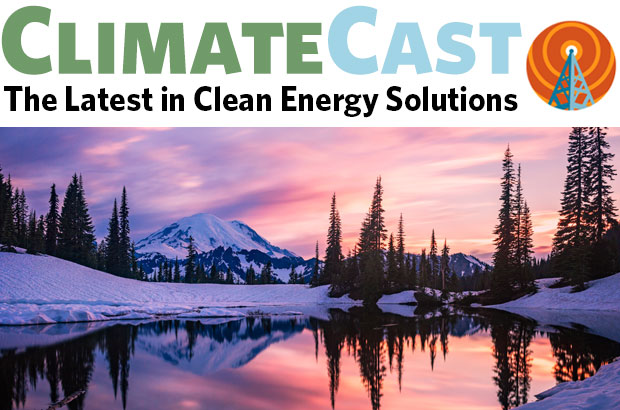 The Pacific Northwest is a hub of climate action right now. Washington Governor Jay Inslee announced his presidential bid last week, naming climate change as his top priority issue. Climate legislation is moving forward in both Washington and Oregon. In Washington, the Senate voted 28-19 in favor of 100% clean electricity (SB 5116), which would require the state’s utilities to stop using coal-generated electricity by the end of 2025, and make Washington utilities carbon-free by 2045. In Oregon, legislators completed a statewide “road show” where hundreds provided public testimony on the Clean Energy Jobs bill, HB 2020, and over 70 scientists and experts with the Union of Concerned Scientists urged the Oregon legislature to pass strong climate legislation in 2019.

A first-of-its kind renewable energy project in the U.S. is underway in eastern Oregon, combining wind and solar power with battery storage. In Texas, the world’s largest battery could soon store solar energy, increasing the state’s battery storage six fold. In the Southwest U.S., battery prices have fallen so low that local utility officials declared battery technology the least expensive way to deliver electricity to customers, and Arizona’s largest electric company will add large, building-sized batteries to the power grid across the state, discharging surplus power generated during the day in the evening. In Europe, an Audi factory in Hungary could soon become home to one of the world’s largest rooftop solar installations. The new solar energy park on the roofs of two logistics centers will cover 160,000 square meters, equal to nearly 24 square city blocks.

Carbon pricing is catching on

South Africa’s parliament has approved a carbon tax bill, finally passing it after related bills were mooted in 2010 and then postponed at least three times. The effort is part of South Africa’s pledge to cut emissions in half by 2030. In cap and trade news, last month’s joint California-Quebec auction illustrated yet again that the market remains strong and resilient after the economic uncertainty of PG&E’s bankruptcy filing, as all current and two-thirds of future allowances sold. And according to new research, climate policies work: Countries with strong climate policies have seen the biggest drops in emissions.

Costa Rica’s President signed an official decree to decarbonize the country by mid-century, followed up by announcing the country will extend its moratorium on oil exploration to 2050. Spain has unveiled a major public investment plan to make the country carbon neutral by 2050. The plan calls for phasing out coal, replacing that power with renewables, and making sure all new cars are emission-free by 2040. Back in the states, Los Angeles has scrapped a plan to rebuild aging fracked gas power plants. The mayor cited improved air quality and helping the city get closer to its goal of 100% renewable energy by 2045, opting instead to invest in clean energy and energy storage. This move is another sign that Big Oil’s efforts to promote fracked gas as a bridge fuel to a low-carbon economy are starting to crumble. Illinois is working on a bill called the Clean Energy Jobs Act to increase the state’s renewable portfolio standard and reduce carbon emissions from the transportation sector, among other provisions.

Oceans warming due to climate change are losing oxygen, harming the health of the oceans and the entire food chain. While oxygen levels have only dropped subtly worldwide, recent studies show levels in some tropical regions have dropped by as much as 40 percent. Food production systems are also endangered due to loss of biodiversity exacerbated or caused by climate change. People are depending on fewer species for food, making the food system susceptible to shocks caused by pests, disease, droughts, and extreme weather events.

Carbon dioxide levels in the atmosphere could soar to levels not seen in 56 million years by the middle of next century. In Antarctica, an iceberg twice the size of New York City is about to break off of the Brunt Ice Shelf. While the break itself won’t have a huge impact, it signifies that climate change could be destabilizing similar ice shelves similar and could also jeopardize critical scientific research that has been conducted on the ice shelf for more than 60 years. In the U.K., wildfires broke out in February amid record breaking winter temperatures.

In Oregon, a new four part series details how industry has successfully influenced state politics to kill, weaken, or slow efforts to tackle climate change and other environmental issues. Parts one and two are available here. Last week the Senate confirmed former coal lobbyist, Andrew Wheeler, as new head of the Environmental Protection Agency. The Trump administration is creating a panel to assess whether climate change poses a national security threat, spearheaded by William Happer—who has previously said that carbon emissions linked to climate change should be viewed as an asset rather than a pollutant. Elsewhere in D.C., the Congressional Western Caucus held a forum to discuss the Green New Deal, largely inviting well-known climate-change deniers and industry-linked groups.

In brief: One in ten companies going public say climate change is a risk to their business

An increasing number of companies going public are now considering how climate could impact business. Ten years ago, only about five percent of companies, largely fossil fuel companies, cited climate change as a potential threat to business in their IPO registration documents. That number has grown to 10-15 percent, including Levis and BJs Wholesale Club just last month.