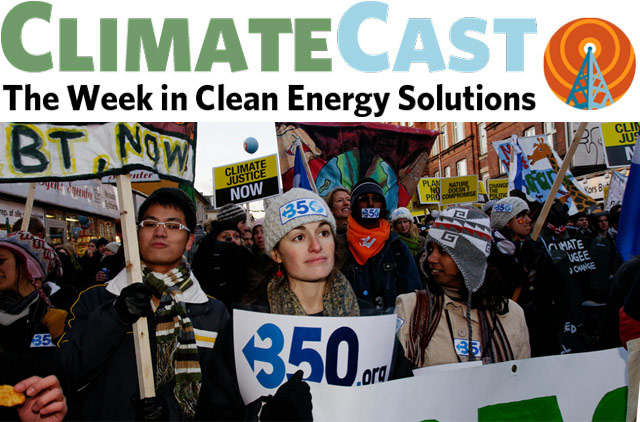 Counting down to the NYC climate summit

With less than two weeks until the People’s Climate March in Manhattan, the interwebs are aquiver with articles putting the demonstration in a larger historical context, debating whether it should press for a specific set of demands, and guiding participants around other New York-area events. The march aims to influence the climate summit later that week, convened by U.N. Secretary-General Ban Ki-Moon, who downplayed the news that the Chinese and Indian leaders will not attend. The summit precedes the 20th (!) round of U.N. climate negotiations, to be held in Lima in December; the Peruvian minister chairing those talks revealed a bit of his strategy to generate results by that time.

Airplanes next in line for rules cutting carbon emissions

Aircraft in the U.S. will be regulated to reduce their contribution to global warming, if a study announced last week by the Environmental Protection Agency reaches its expected conclusion. A successful lawsuit by the Center for Biological Diversity and others forced the agency to consider whether public health is at risk from airlines’ CO2 emissions—and if so, to limit them. Options include efficiency standards for new planes, which could be harmonized with global standards due to be completed by the United Nations’ International Civil Aviation Organization in 2016.

Nonviolent direct climate action in the Pacific Northwest ratcheted up a notch last week, when five activists blocked a mile-long oil train from leaving the rail yard in Everett, WA. The protestors erected a tripod across the tracks and chained themselves to it—one of them at the apex, more than a dozen feet in the air. Climate author Patrick Mazza, who was cabled to the tripod at ground level, describes the eight-hour blockade here. Oil-by-rail shipments have become a cause célèbre both for their climate impacts and the danger of explosion that highly flammable Bakken crude oil poses to communities along their route.

A federal judge ruled last Thursday that British Petroleum was “grossly negligent” in the 2010 explosion of the Deepwater Horizon drilling platform in the Gulf of Mexico, exposing the firm to an additional $18 billion in penalties, on top of the $31 billion in criminal penalties and restitution that it has already swallowed. The judge’s finding of gross negligence—in which he pointed to “profit-driven decisions” in disregard of known risks—quadruples the fine that BP faces under the Clean Water Act. Even so, it pales next to the firm’s expected cash flow this year of some $30 billion, making this just another cost of doing business.

Solar and EVs growing, with help of incentives

Home solar power in Washington State has nearly tripled over the last two years, despite three factors that make it less favorable than neighboring states: cheap retail power, 30 percent less sun than Los Angeles, and state rules that make leasing unfeasible. Utilities question whether solar deserves the backing it receives, which compels them to buy homeowners’ excess power at retail rates. On the electric consumption side, all-electric and plug-in hybrid vehicle sales continue to grow nationwide, while hybrid car sales declined 7 percent during the first part of last year.

Natural gas neither bridge nor off-ramp to clean energy future

Bill McKibben, whose seminal Rolling Stone 2012 article inspired a grassroots global climate movement to tackle on the fossil fuel industry head-on, is back with a well-argued piece that explains why substituting natural gas for coal is an ineffective lower carbon solution until renewable sources are robust enough to power society’s needs. Methane leaks wipe out natural gas’s carbon benefit; but even more important, investing in gas now delays the needed investment in low-carbon fuels.

Human-caused climate change has raised the average temperature in the Pacific Northwest by 1.3˚F, shortening the frost season by two or three weeks, according to regional climate scientists writing in the Journal of Climate. The change is the equivalent of raising the snow line by 600 feet. In California, the exceptional drought continues, and new climate research links global warming with a heightened risk of mega-droughts, which continue for 10 to 50 years. Even in years of normal precipitation, changes in forest composition are predicted to push thirsty forests farther uphill, reducing the available run-off for human use.

Verging on parody, this article (originally published in Condé Nast’s Details magazine) helps the connoisseur anticipate which varietals will go downhill as the climate warms—a concern that is already leading wine-makers to invest in vineyards in higher latitudes. Details even advises how to stock your wine cellar (you do have one, don’t you?) with bottles whose future vintages are unlikely to measure up to current performance. Pretty far up Maslow’s hierarchy of needs, the unspoken assumption is that your cellar is dug into high enough ground so you won’t need to sand-bag it before the next über-monsoon or gully-washer.