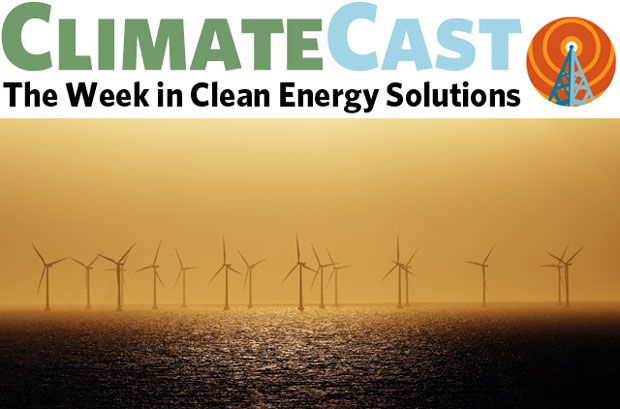 More than 40 percent of Texas’s coal-fired electric capacity is unprofitable and will likely be shut down, according to a study by the Institute for Energy Economics and Financial Analysis. Energy giant AES Corp. won’t start any new coal plants after it completes the two under construction in India and the Philippines, its CEO said last week, preferring to focus instead on battery storage, renewables, and natural gas. These trends were confirmed in Germany, where power company Eon said this in its disclosure to prospective investors in its fossil power division: “Conventional generation of power … faces the risk of disappearing completely from the market.” On the petroleum side, Norway cancelled plans to open new tracts in the Arctic to oil and gas exploration, and in the UK, ExxonMobil was exposed for lobbying against the electric car, which represents a long-term threat to its market.

The US could develop 86 GW of offshore wind energy by mid-century, according to the National Offshore Wind Strategy released last week by the departments of Energy and Interior. That projection—including leases already in the works for the New York, California, North Carolina, and Hawaiian coasts—pales in comparison with the 2,058 GW the report says are feasible with current technology. The DoE aspires to cut the cost below 10 cents per kilowatt-hour—a lax ambition compared with the record low price of 6.7 cents achieved this month at an auction for a site in the Danish North Sea. In contrast, terrestrial wind in the US is already blossoming, with Xcel Energy gaining approval last week for 600 MW in Colorado, and Iowa greenlighting 2 GW to be built by the end of 2019.

Minutes after a judge rejected the Standing Rock Sioux’s plea to halt work on Dakota Access oil pipeline, the federal departments of Justice, Interior, and the Army stopped construction while they consider the tribe’s claims that it was not adequately consulted on the project, and that the pipeline would imperil cultural sites and water quality. The conflicts crystallizes issues of tribal sovereignty and environmental justice and has become a cause celebre in the five months since indigenous people from other tribes joined the Sioux’s protest encampment. Heralded by writer Rebecca Solnit as a new conjunction of the environmental and human rights movements, the protests led law enforcement to issue a warrant for the arrest of Democracy Now!’s Amy Goodman, who was filmed trespassing on private land while covering a clash between security guards and demonstrators.

Beginning this week, Uber customers will be able to summon a ride in a self-driving car in Pittsburgh, a city that has created a welcoming climate for innovation in autonomous driving. A human driver will ride along, ready to take the controls, as in a similar experiment already underway in Singapore. Safety experts nevertheless expressed skepticism that the technology is ready for road testing, given self-navigating systems’ difficulty in recognizing bridges and crossing guards; knowing where they are if a nearby driver is using a GPS jammer; and coping with human beings who like to mess with robots. Uber is also developing a self-driving 18-wheeler for highway travel only. Transit agencies are exploring the use of car- and bike-sharing or Uber-like services to serve the beginning and end of passengers’ trips in lower-density areas.

Solar entrepreneurs are planning to use a pair of thousand-foot-deep ore pits at an abandoned Australian gold mine to provide pumped hydro storage to a 300-MW solar farm. The system will cycle the same water up and down through turbines to deliver power when the utility needs it most. India has announced plans for 10 GW of pumped hydro storage—one-ninth of the country’s potential—to better integrate solar and other renewables onto the grid. In California, solar growth and a post-drought return to average hydroelectricity production cut natural gas use last summer by 20 percent compared with 2015—despite smoke from wildfires that reduced PV power production by several percentage points.

An unfinished $5 billion Tennessee Valley Authority nuclear power plant went on the auction block in Alabama this week, at a minimum bid of $36 million. The plant was mothballed in 1988 when it was 90 percent complete. In New York, five legislators came out against a $1 billion bail-out plan for upstate nuclear reactors. Taiwan is aiming to add 1.5 GW of solar power in the next two years, on its way to displacing its nuclear fleet with solar power by 2025, as its new president promised while campaigning this year. British doubts about the heavily subsidized $24 billion plan to build the Hinkley Point C nuclear power station threatened to torpedo the deal—an outcome Financial Times columnist Jonathan Ford would welcome.

In brief: Obama on climate, and all-renewable boat

For a 13-minute reminder of how valuable it is to have a climate-aware, steady hand on  the White House tiller, nothing beats this NYT video interview with President Obama. And in France, a 100-foot catamaran is being transformed from a prize-winning sailing yacht into a new kind of renewably powered vessel: outfitted with wind generators and solar panels, it will store excess energy in on-board hydrogen tanks that it will use to generate power when the sun and wind fall short. Designers of the Energy Observer aim to pilot it around the world in six years, starting next February.