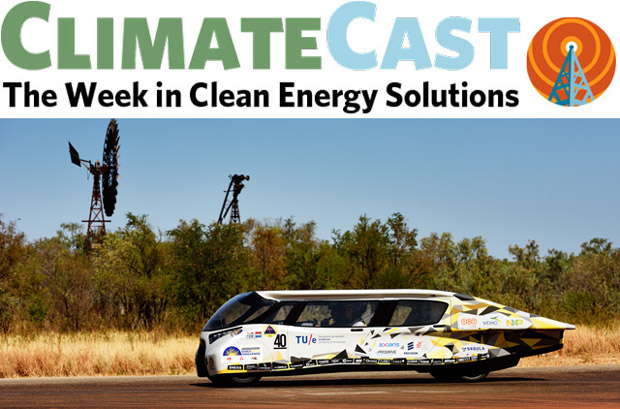 Progress was elusive in Bonn last week at the last official negotiations before the Paris climate summit, as the draft agreement ballooned to 51 pages when diplomats inserted hundreds of new alternative clauses into the document. Developing nations demanded assurance that rich nations pony up more for the transition to clean energy, in a conflict NPR compared to the wrangling over the bill for an evening’s drinks among a group of friends who arrived at the bar at different times and weren’t all equally thirsty. Host country France said it wouldn’t repeat the Copenhagen mistake of creating an alternative treaty text in secret, insisting that the countries work from the current draft—a process whose outcome game theorists attempted to predict.

President Obama’s Clean Air plan became final last week with its publication in the Federal Register, cueing a spate of lawsuits to block the rules that would cut climate pollution from the US power sector 32 percent by 2030. The suits drew opposition from an unexpected quarter: GOP’s NH Sen. Kelly Ayotte, who voiced her support of Obama’s program last weekend. Ayotte may be out of step with her party’s establishment, but her views accord with the evolving views of Republican voters, 59 percent of whom believe the climate is changing, and 51 percent of whom say they’d more likely back a presidential candidate who’ll set a minimum requirement for utilities’ use of renewable power.

Europe’s climate pollution dropped in 2014 to the lowest level since concern for global warming began, according to an EU report released last week, reaching a level 23 percent below 1990 emissions. That achievement was tainted, however, by findings that solid biomass represents more than half of renewable energy consumption in 15 EU countries, including Sweden, Denmark, and Hungary. European wood energy is officially tallied as having no climate impact and earns renewable energy subsidies, even though it takes decades for forest photosynthesis to scrub the air of the carbon released when wood is burned, and in the medium term, wood-fired electricity adds more carbon to the air than coal.

Energy storage is preparing to break out of its holding pattern, thanks to dropping costs and new technologies. Projects combining solar power and batteries moved ahead last week, with a 6-megawatt system announced for a southern California school district that will use the system to reduce both its energy and demand charges from the local utility. In Honolulu, a solar-powered florist connected 36 kilowatts of storage in the first step of a 1-megawatt grid storage project, and in North Carolina, the US Marine Corps tested 31 different battery packs in battlefield conditions, finding some that are immune to the over-heating that has plagued lithium-ion batteries.

Architects’ efforts to cut new buildings’ predicted energy consumption by more than half seem to have hit a roadblock. Building designers who participate in a voluntary American Institute of Architects program report that they’ve reduce anticipated energy usage by an average of 37 percent, well short of their 60 percent target. Barriers include consulting energy models too late in the design process and clients’ resistance to spending more on energy-saving features. Meanwhile, the American Council for an Energy-Efficient Economy released its rankings of state energy efficiency programs, in which Oregon garnered fourth place. Washington came in eighth, falling short mainly by virtue of weaker utility programs to support energy efficiency.

Dutch entries won both divisions of the biennial solar car race in Australia last week, covering the 1,800-mile course in five days, using only the solar energy collected on the cars themselves. In Juneau, Alaska, where direct sun can be scarce but hydropower makes the grid 99.5 percent carbon-free, moves are afoot to electrify a wide spectrum of vehicles, from cars to tour buses and even a whale-watching boat. That’s the kind of move away from fossil fuel that the Carbon Tracker Initiative warns of in its new report, Lost in Transition, on the perils of accepting the fossil fuel industry’s assumptions of continued high demand for its products.