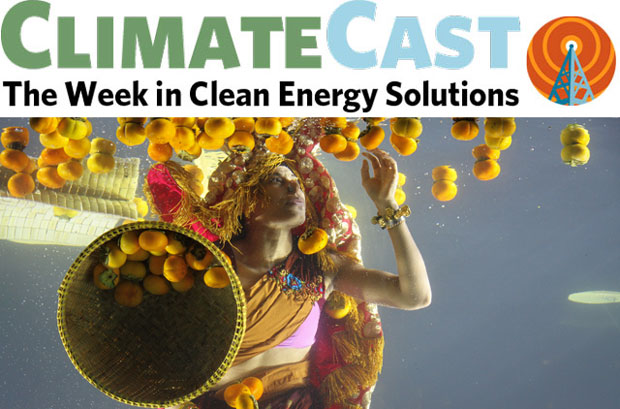 Negotiators refined the text of a climate agreement in the first week of the Paris summit, setting the stage for ministerial talks to tackle outstanding issues summarized in 900 pairs of brackets littering the 21-page draft. The trickiest ones: how often to reassess greenhouse pollution goals, how to verify countries’ fulfillment of their promises, and how nations’ financial obligations should ramp up as they develop. Add potodoso to your lexicon, which is short for “countries in a position to do so,” referring to emerging economies such as China’s that no longer fit into the Kyoto-era 1997-vintage division of the world into developed and developing. The world’s most polluting nations endorsed the most vulnerable countries’ tougher goal of holding global warming to 1.5˚C, while climate writer Joe Romm interpreted the meaning of national pledges and estimated the future commitments needed to attain different levels of climate ambition.

Good Paris updates can be found at the Climate Nexus portal, The Road Through Paris, and on Twitter feeds from Climate Solutions’ KC Golden and Climate Change News.

Diplomats say that their strong personal motivations are what enables them to endure the marathon negotiating sessions at UN climate talks. But at least in Paris they are enjoying the benefits of French hospitality including duck confit, boeuf bourguignon, and French wines in a setting which France’s climate change envoy designed to facilitate comity. Outside the conference venue, activists spoke, rallied, and spoofed to get their point across: Exxon was put on mock trial for its duplicity in sowing doubt despite its own research confirming that burning oil and gas changes the climate, and fossil-fuel lobbyists found their likeness plastered around town on “Wanted” posters.

The Financial Standards Board, a global body that sets disclosure requirements for financial institutions, will develop standards for companies to use in disclosing their climate risks, it announced Friday in Paris. The rules—to be developed under the leadership of financial news mogul Michael Bloomberg—will require firms to report risks from restrictions on carbon pollution and from the impacts of climate change. The move comes amid mounting calls to reduce subsidies to the fossil-fuel industry, estimated at nearly half a trillion dollars yearly. The Paris climate talks notwithstanding, OPEC’s annual meeting in Vienna ended with its nations unable to set prices or production quotas, and continuing to pump full bore, at 31 million barrels a day.

Climate impacts always on the mind

Extreme weather events—whose likelihood is increased by climate change—formed part of the backdrop for the Paris talks last week, as northern Britain and southern India both suffered from torrential rainfall. The rising seas already buffeting the Marshall Islands were the topic of a multimedia NYT report, the ocean-battered Quinault Nation in southwestern Washington was featured on NPR, and other indigenous leaders in Paris called for an end to all fossil fuel extraction. Still, some climate-vulnerable small countries such as Nicaragua have opted not to submit carbon-cutting pledges to the UN conference, in protest at the voluntary nature of national commitments in this year’s draft climate accord.

Growth in worldwide climate pollution slowed dramatically last year and is projected to actually reverse in 2014, according to a new paper in Nature Climate Change. The inflection is noteworthy because it coincides with global economic growth; it appears to be driven in large part by a slowdown in Chinese coal consumption. Further declines will be aided by plans announced last week to distribute 10 billion super-efficient LED bulbs, and by wind and solar power, whose prices have plummeted for reasons explored here and which are now predicted to supply more new energy in the next five years than U.S. shale oil did in the last five.

Not quite the right stuff

As countries take aim at greenhouse gas emissions, coal is under pressure and unlikely to regain prominence, nor does it appear technologies to cleanse its exhaust of CO2 will rescue coal any time soon. Prospects for expanding nuclear power are mixed, with reactor sales in developing countries counterbalanced by challenges developed countries face with the technology, while deep-pocketed high-tech investors are working hard to develop small, “meltdown-proof,” modular nuclear plants. In only six weeks, an unpluggable massive methane leak from a natural gas storage well has released climate pollution equal to driving 160,000 cars for one year, casting doubt on the value of natural gas as a bridge fuel during the transition to a low-carbon future.

Two films expected to be contenders for the 2016 Academy Awards—Quentin Tarantino’s The Hateful Eight and Alejandro Iñárritu’s The Revenant—encountered climate hurdles when the weather failed to deliver snow that the directors were counting on, forcing Iñárritu to move production of the final scenes from Alberta to Argentina. In Miami, artist Lars Jan staged a performance art installation called Holoscenes, which portrays the disruption that unpredictable flooding can visit upon our quotidian lives. Performers inhabit an aquarium on public display which fills at odd intervals, breaking their routines of sleeping, guitar-playing, or fruit-vending—a piece that can also be experienced on video.