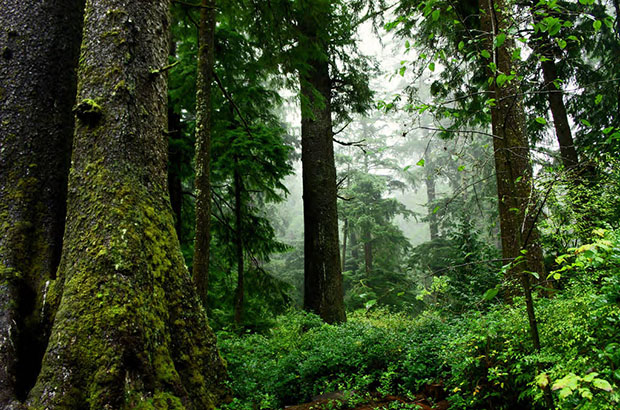 How much carbon is stored in natural systems of the continental western US?  Over coming decades, how much of the fossil fuel carbon dioxide we are pumping into the atmosphere will western ecosystems absorb? A new US Geological Service survey provides some sobering answers.

The new study, Baseline and Projected Future Carbon Storage and Greenhouse-Gas Fluxes in Ecosystems of the Western United States, covers US lands and waters west of the continental divide.  It is part of a national carbon storage assessment ordered by Congress.  Thick with numbers, the report’s four-page executive summary provides a good overview.  Here are several absolutely key figures:

Those numbers hammer home the two takeways.  By 2050 western ecosystems might store less carbon than now, or substantially larger amounts.  The uncertainties are in climate change and land use change. And even the best performance will only make a small dent in atmospheric carbon accumulations if we continue to let them grow.  It is time to back out of fossil fuels fast through a combination of efficiency and clean energy.  Then we can direct natural carbon accumulation to its most critical climate task – the long-term project of reducing atmospheric CO2 to a level consonant with climate stability.  Now over 390 parts per million, it must be driven down to 350 and under.  That is the goal of the Northwest Biocarbon Initiative.

USGS scientist Ben Sleeter underscored the varying effects of different climate pathways during a Wednesday report release at the American Geophysical Union meeting in San Francisco.  He showed a slide depicting how Intergovernmental Panel on Climate Change scenarios affect projected western carbon accumulations.  Under less aggressive emissions reductions scenarios (A1b and A2) annual additions to western carbon storage by 2050 dip as much as 16 percent, to 76 terragrams a year.   Under a scenario in which the west is comparatively less hot and dry (B1) annual carbon accumulation increases 11 percent to 101 terragrams.

Because other factors are in play, there is a wider uncertainty band.  USGS projects that western ecosystems might absorb 114 terragrams in any given year, or actually emit 2.9. This has to do with land use changes such as conversion of forests to residential development, and assumptions about the projected level of wildfires.  Indicatively, much of the projected decline in carbon storage capacity is in grasslands, shrublands and forests of the Western Cordillera. Essentially the west’s higher mountain regions beyond the maritime West Coast forests, the Cordillera stores the largest share of the west’s carbon, an estimated 8,163 terragrams.  These are areas that have already seen an upsurge of drought-driven wildfires such as last summer’s in Colorado and New Mexico.

We urgently need to preserve our current natural carbon stocks by limiting land use change and fossil fuel emissions driving climate change.  We also will likely have to consider more active efforts to upgrade carbon sequestration beyond natural accumulation projected by USGS, such as reforestation and planting new forests.  What we cannot do is continue to add to growing atmospheric carbon levels and hope to return to anything like a stable climate system.  The new USGS study provides the carbon math to conclusively nail home that point.