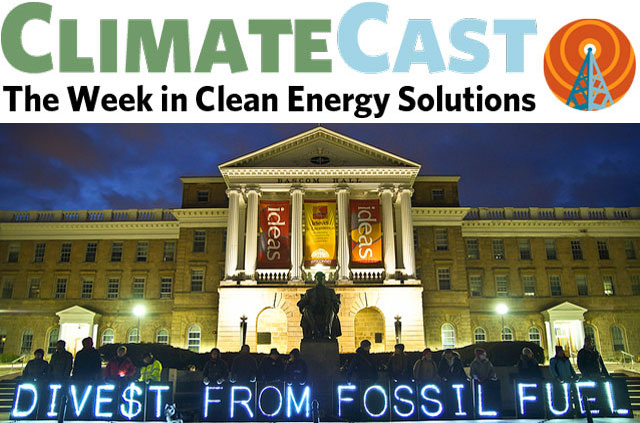 Insurance giant Lloyd’s of London last week called on its member companies to account for the impact of climate change as they model the risk of losses to their customers. Its report cited an estimate that Hurricane Sandy caused $8 billion more in damage to New York because of the eight-inch rise in sea level since the late 19th century. Meanwhile, energy investors face risk from a different quarter. The Carbon Tracker Initiative warned that $1.1 trillion in investments in fossil fuel development in the next decade could be wasted as the world economy turns away from fossil energy for economic and environmental reasons.

U.S. in talks with China, where climate action crucial

A study out today says that limiting global warming to an average of 2 degrees Celsius will be more plausible if China can begin to reduce its use of coal by the end of the decade. The report arrives as China is beginning to develop its five-year-plan for 2016-2020, and as the U.S. begins talks with China on ways the world’s two largest emitters can limit carbon pollution. These developments come on the heels of a Seattle Times series last week on China’s dependence on coal and the challenge of growing its renewable energy production fast enough to cut into coal consumption.

Stanford purges coal from its endowment

Stanford University became the largest American university to divest from fossil-fuel stocks, when its trustees voted last week to sell its holdings in coal-mining companies. The vote came between regular meetings of the trustees, after students voted last month by more than 3 to 1 to urge the university to shed investments in oil and gas firms as well. Divestment helps disentangle our lives from the fossil-fuel system, writes Climate Solutions’ strategist KC Golden, which not only helps citizens feel freer to advocate a carbon-free future, but is also a step in cutting off support to firms pushing in the exact opposite direction.

Recent contracts for wind power are already priced below the cost of electricity generated from fossil gas, according to a conference presentation by a scientist from Lawrence Berkeley Laboratory. Even photovoltaic power is headed in the same direction, with solar developers selling power at around 5 cents per kilowatt-hour and dropping. Lower prices add to the challenges of financing new projects, but project developers are rolling out new investment approaches including repayment tied to property-tax bills, and the Department of Energy’s loan office is offering $4 billion in new loans aimed at better integrating renewable projects into the grid.

Last Tuesday, the Obama administration released the Third National Climate Assessment, a richly illustrated 800-plus-page report documenting climate impacts already affecting Americans in every region and sector of the economy, accompanied by nine slickly produced video segments. Some critics scolded the rollout for resorting at times to oversimplified statements and over-politicization, undercutting an otherwise solid body of work. Climate Progress offered two interesting takes on the reporting of the study: one looked at the duration and thrust of cable TV coverage on various channels, and the other sampled what it considered the “worst TV news reactions” to the report.

High rates of solar power production on the grid have pushed utility operators in Hawaii to invite bids for 60 to 200 megawatts of storage—enough to power millions of laptop computers—that could be used to absorb excess electricity generated by sun and wind, and release it when clouds pass overhead. On the demand side, a New York energy agency is sponsoring a test of high-capacity flow batteries as a way of cutting peak demand at a 1.6-million-square-foot office building in Manhattan. Unlike solid batteries, flow batteries’ capacity is limited only by the size of their storage tanks.

Puget Sound Bike Share announced last week that it will launch this fall with 500 bicycles bearing the logo of Alaska Airlines, in recognition of the firm’s $2.5 million donation to the program. Access to the seven-speed bikes will cost $8 a day or $85 a year. Portland’s program is in the works, as well, but still lacks a main business sponsor, although it has defined its core market: people who drive or take public transit to work, but need a bike to run errands during the day. Prospects for bike-sharing are clouded by the recent bankruptcy of Montreal’s program, the first in North America.

The Guardian launched a new blog called “The science of sustainability solutions” with an inaugural post on why operators of commercial buildings do not always embrace basic energy efficiency measures that would save money, even though energy savings of 5 to 30 percent can easily be achieved. Although policy, rate structures, utility engagement, the degree of disruption for adding an efficiency measure, and overestimating the true costs are all in play, a University of California study finds that a critical factor is whether the corporations and individuals who occupy the buildings have the incentives to change their energy consumption patterns.