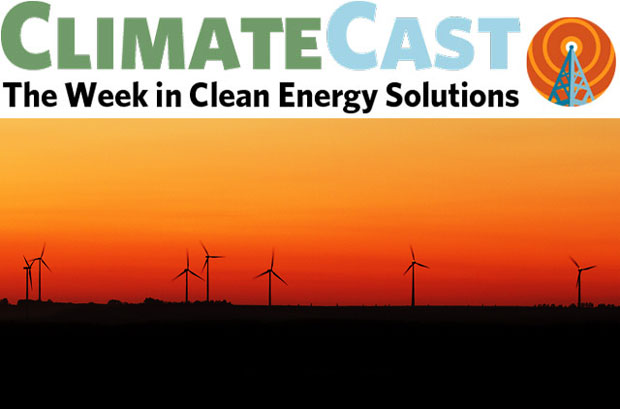 Renewable power will comprise 60 percent of the generating capacity built worldwide by 2040, Bloomberg New Energy Finance said last week, but fossil fuels will still produce 44 percent of the world’s power in 2040. The forecast assumes no new climate policies and extrapolates economic and technological trends to project some $8 trillion in clean energy investment, including $3.7 trillion in solar. That investment is already ramping up, says The Wall Street Journal. However, official U.S. projections remain conservative, holding back estimates of how quickly the American economy can decarbonize, even as localities as diverse as Saudi Arabia and Vermont jump into solar and deep efficiency.

A major oil consortium will defer offshore exploration in the Canadian Arctic, because it doesn’t believe it could finish drilling before its lease expires in 2020. The consortium—including BP and ExxonMobil—requested a seven-year extension Monday, even though observers tagged Arctic oil as a risky investment. Farther south, Albertan tar sands are responsible for 20 percent higher emissions per gallon of fuel than conventional oil because extraction is so energy-intensive, according to research published this month. However, those emissions will need to decline or be paid for under new provincial standards that will require oil producers to cut emissions 20 percent, or pay $30 per ton on any excess.

Clean fuels survives petro-pressure in OR

Oil industry pressure failed to roll back Oregon’s freshly renewed Clean Fuels Standard by including its repeal in a proposed  $343 million Oregon transportation package to fund road and transit improvements. A hearing Wednesday cast doubt on claims that substitute programs would have equal or better climate benefits, and a coalition of House legislators held firm against the proposal. In waning days of the Washington legislative session, it appears that the oil industry and its allies are preventing Gov. Jay Inslee from enacting a Clean Fuels Standard by lacing the $15 billion transportation bill with a “poison pill” provision cutting transit funds if he moves ahead with that program.

Energy efficiency sustained a temporary black eye last week from economists evaluating a Michigan low-income weatherization program. The paper—released without peer review—said conservation saved less than half as much energy as predicted, with costs double the benefits. This man-bites-dog story garnered heaps of press coverage, which attracted rebuttals from knowledgeable sources, and even a thoughtful follow-up in Vox. Their top points: low-income weatherization is unrepresentative of residential efficiency in general, which saves energy at less than a quarter the cost of low-income programs; and it aims not just to save energy but also to improve safety and comfort for occupants who can’t afford to fix their homes.

The last half-century’s public health gains are at risk if the impacts of climate change go unchecked, according to a major study published last week in the prestigious British medical journal The Lancet. The authors suggest policy recommendations to slow climate change that would significantly improve global health in the 21st century. U.S. Surgeon General Vivek Murthy said it was “well past time” to act on climate at a summit of health experts and environmental activists, and the U.S. Environmental Protection Agency released a study calculating that the U.S. could face up to $180 billion in economic losses due to drought and water shortages by the end of the century.

By 2030, New York State aims to cut its climate pollution 40 percent below 1990 levels, according to a final climate plan revised after 100,000 public comments. The plan envisions that 50 percent of the state’s electricity will come from renewable sources. The EU, too, is aiming for a 40 percent cut by 2030, which will also translate into renewables supplying half of Europe’s electricity—necessitating grid upgrades to accommodate it. Clean energy now accounts for about a quarter of EU electricity, and it is already affecting prices: abundant solar and wind power last month pushed wholesale day-ahead prices down to an average of 2.8 cents per kilowatt-hour.

In a first-of-its kind ruling, a court in The Netherlands last week ordered the Dutch government to accelerate cuts in climate pollution to protect its people from the impacts of climate change. The ruling is the first to rely on a government’s general duty to safeguard its citizens as a reason for climate action. In an unrelated Washington State case, a court agreed with eight plaintiffs, ages 11 to 15, that the Department of Ecology must issue rules to rein in the state’s carbon pollution to stem the effects of climate change.