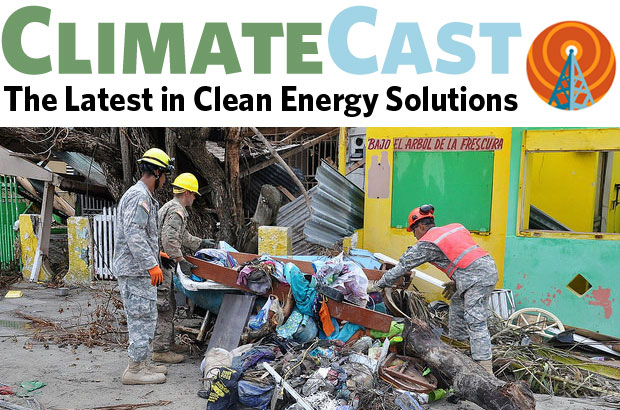 PUERTO RICO NATIONAL GUARD
Many reasons for hope, but also much to fear
Devon Downeysmith
October 3, 2017

Puerto Rico is in the midst of a humanitarian crisis. It has been over two weeks since Hurricane Maria made landfall there, yet much of the aid received is still trapped in shipping containers; its electricity grid is months from becoming functional, and more than half of Puerto Rico is still without drinking water. The toll of this disaster is not yet known because people are still in the grips of it. Hurricane Maria may very well be a preview of climate-fueled migrations in America, as more people are forced out because of storms like this one. The recent swath of tropical storms has created a discussion of flood insurance; if previously 500-year storms will now occur every few years, many  people’s homes may no longer qualify for insurance. A new study found that “climate shocks” like hurricanes, along with wildfires, drought and increased public health impacts, will cost the US nearly $1 billion a day within a decade.

If you’re looking for ways to support the Puerto Rico relief effort, here’s a list of ways you can help.

Acting on climate across the country and in business

A proposed coal export facility in Longview, Washington has been stopped, as a state agency denied a key permit the project needed to move forward. The terminal would have been the largest coal export facility in North America if it had been built. The Power Past Coal coalition (which Climate Solutions helped found and is part of) worked tirelessly with many local leaders and community groups for seven years to keep this dirty coal terminal from coming to fruition. Now, the surrounding community is determining how best to move forward, with many saying now is a critical moment to drive economic development toward a cleaner future.

Longview isn’t the only place taking the reins on climate action. Cities across the US are working together to reduce emissions and hasten the transition to a clean energy economy. Cities are tightening building codes to increase energy efficiency and reduce emissions -- and fining building owners who don’t comply. Businesses are also moving forward: Auto company General Motors announced it will transition to producing only electric vehicles; 100 of the world’s most influential businesses are creating a huge demand for renewable energy; and ten of the world’s largest companies have launched a global campaign to expand corporate electric vehicle use and charging infrastructure (a big deal when you consider that about half of the cars on the road belong to companies).

Global carbon emissions stood still in 2016, and all of the world’s biggest emitters except for India saw falling or static carbon emissions last year due to countries increasing clean electricity usage. The UK experienced its greenest summer to date, generating 52% of its electricity from low-carbon sources. Even in the US, where the federal government’s leadership on climate action lags, fourteen US states are on track to meet Paris climate accord targets. In Wyoming and West Virginia coal country, the transition to a clean energy economy is moving forward, with coal workers being trained to work on a new wind farm and become solar installers. Senator Lindsay Graham has reached across the aisle on climate policy, pursuing legislation with a Democratic Senator to put a price on carbon pollution.

Clean energy presses on -- and off the grid

The US Energy Information Administration reports that while world energy consumption will increase in the future, the demand for coal will remain flat and clean energy will be the world’s fastest-growing energy source. Canada already has so much clean power it’s looking to offload some of it to US markets. Back in August, we reported that Chile is on its way to becoming a clean energy powerhouse; now a leading presidential candidate is calling for Chile to use 100% clean electricity by 2040. In India, the world’s fifth largest auto market, the government is looking to move completely to electric vehicles by 2030. In Japan, a city of 40,000 is rebuilding after the 2011 earthquake and tsunami by creating a partially self-sustaining power system, joining dozens of other Japanese towns moving toward self-reliant, local generation and transmission.

Are you kidding me?

A new piece by the Center for Public Integrity shows that some of the companies that spoke out against President Trump’s decision to leave the Paris climate accord are also supporting a GOP effort to undo the Clean Power Plan. EPA administrator, Scott Pruitt, withdrew a proposal to protect an ecologically valuable site in Alaska from mining just hours after met with a mining company CEO. While Tom Price’s aviation activities dominated headlines last week, news also emerged that Interior Secretary Ryan Zinke chartered a private flight on a plane owned by oil and gas executives. President Trump has a new opportunity to stall US solar progress by enacting trade barriers that would make panel prices soar. Americans remain divided by party on whether global warming played a role in the recent hurricanes that have devastated communities and dominated headlines. Lastly, the US is now one of only two countries in the world, along with Syria, that remains opposed to the Paris climate accord now that Nicaragua has signed onto the agreement.

In Brief: Opportunities for Northwest readers to connect

Join industry leaders and business, advocacy and government experts in Seattle on November 2 for an important conversation on how the Northwest can transition to the cleanest possible electric system. Following the conference, join us at the Clean Energy Awards Gala, honoring exceptional leaders working to advance clean energy progress in the Northwest. Get your ticket here.

You can also join Climate Solutions at our 9th Annual Dinner, Convergence: Accelerating clean energy solutions to the climate crisis on November 14 in Portland. This year, we’re thrilled to have Kate Gordon, Senior Advisor at the Paulson Institute, as our keynote speaker. Our annual dinner is always a very special event  --  a great opportunity to connect with others building clean energy solutions to the climate crisis. Click here to register.