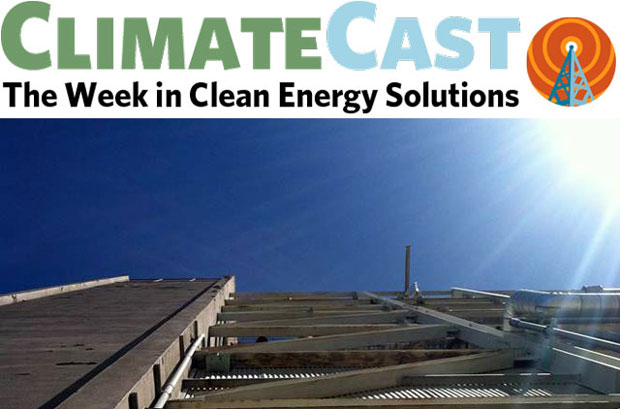 Oregon will phase out the use of coal power and double its Renewable Portfolio Standard to 50 percent, if a deal unveiled last week between utilities and environmental and consumer advocates becomes law. The agreement was spurred by an impending fight over ballot initiatives filed by Renew Oregon, a coalition of which Climate Solutions is a part. In Washington, the Department of Ecology announced a draft of Gov. Jay Inslee’s Clean Air Rule, which would ratchet down climate pollution from the state’s largest emitters by 30 percent over 20 years. The rule will see comment at public hearings, with a final version expected this summer.

Detroit Auto Show gets a case of electron fever

General Motors rolled out the Bolt last week, an all-electric $30,000 car with a 200-mile range scheduled to go on sale this year. Playing against GM’s reputation for conventionality, Wired praised GM for beating Tesla in the race to produce the first mass-market EV. GM wasn’t the only automaker touting its electric cars. Mercedes accelerated its EV plans, announcing it will field four models next year, and troubled VW trotted out an electric minibus called the BUDD-e. The shift to electric drive turbocharged talk of autonomous cars: Tesla introduced the “Summon” feature that delivers a car from garage to driveway, and the CBC examined the implications of driverless mobility in this 9-minute report.

More of the thousand cuts in death of King Coal

Arch Coal, the second-largest U.S. coal company with mines in seven states, filed for Chapter 11 bankruptcy protection today, staggering under $4.5 billion in debt. Its troubles are a symptom of coal’s overall decline, with U.S. production hitting a 30-year low last year. The bankruptcy of Arch—producer of 13 percent of US coal—dims the prospects for its proposed Millennium export terminal in Longview, WA. Coal output has fallen since its 2008 apex due to climate policies that encourage electric utilities to switch from coal to natural gas; low natural gas prices, which were nearly halved from 2014 to 2015; and falling demand from Asian markets.

In the first known instance of hackers disabling part of the utility grid, a December outage that darkened 80,000 homes in Ukraine has been definitively pinned on cyber intruders. The attackers disconnected the power flowing through 30 substations in and around the Ukrainian regional capital of Ivano-Frankivsk on Dec. 23. Malware planted on the utility’s network enabled hackers to wrest the controls from grid operators, according to computer security experts. The event lends urgency to a review of US utilities’ cybersecurity defenses, scheduled to begin in April, and provides additional incentive to establish microgrids, an isolatable grid architecture that is friendly to decentralized clean energy production.

Utility-scale solar supplied nearly 7 percent of California’s electricity last year—more than wind or hydro—and rooftop solar generated another 3 percent or so. Nationwide, solar accounted for 14 percent of new electrical capacity on the US grid last year, with wind comprising 47 percent. (Natural gas supplied nearly all the rest.) Although solar advocates’ political savvy flipped enough Republican support in Congress to extend the federal tax credit, they weren’t as successful in Nevada, where regulators voted last month to end net metering. Without retail-price credit for surplus power, SolarCity, Sunrun, and other solar firms shut down operations in the Silver State.

TransCanada Corp initiated a two-pronged legal effort to scuttle President Obama’s veto of its Keystone XL pipeline. The first, under provisions of the North American Free Trade Agreement, claims $15 billion in compensation for economic losses as a result of canceling the pipeline and bolsters environmentalists’ contention that international trade agreements can jeopardize climate policies. The second challenges Obama’s constitutional authority to deny the cross-border permit. Meanwhile, the B.C. government rejected the $6.8 billion Trans Mountain pipeline expansion project, saying Kinder Morgan Canada failed on three occasions to provide adequate details on how oil spills along the pipeline route would be prevented.

Aviation biofuels suffered a setback last week when British Airways shelved a half-billion-dollar plan to make 16 million gallons of biojet fuel annually from London’s municipal waste, with the plant operator in bankruptcy and no government support. In the Northwest, plans for biorefineries that would turn trees into fuel have been delayed by low petroleum prices, making it hard for fuel-makers to turn a profit. Would-be biofuel manufacturers Amyris and Solazyme have instead begun selling their synthetic oils to the cosmetic and culinary markets. Meanwhile, NASA researchers are pursuing new propulsion designs that could cut aircraft fuel use, offering a different path to reduce the climate footprint of flying.

Image: Superstructure of the shuttered Potrero Generating Station in San Francisco, closed in 2013 after 123 years of service. Photo by Seth Zuckerman.