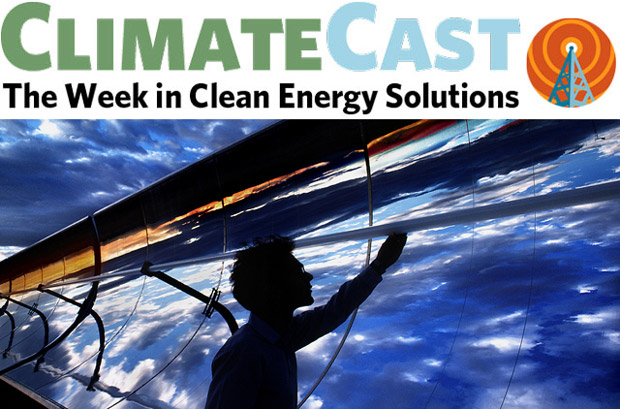 Solar power for under 6 cents a kilowatt-hour

Dubai’s new deal for the cheapest-ever solar power—under six cents per kilowatt-hour—was the buzz at this year’s World Future Energy Summit in nearby Abu Dhabi last week. PV boosters damped down expectations that this price will become the new normal by pointing to the factors favoring the project, such as government purchase guarantees and free land. The Persian Gulf summit brought news of other advances, such as tenders for solar power in Jordan and Egypt. Elsewhere in Petrotopia, Texas windpower production surged past 10 percent of demand last year, even as coal producer West Virginia took the opposite tack and repealed its Renewable Portfolio Standard.

New solar thermal may be last until tax credits extended

With last week’s dedication of Abengoa’s Mojave solar plant, California gained another 280 megawatts of solar power available even after the sun has set. The plant’s parabolic mirrors focus sunlight onto tubes of molten salt, whose heat can be stored for hours to generate electricity. Abengoa warns it will develop no new plants until it knows the fate of the federal solar tax credit, scheduled to drop from 30 to 10 percent at the end of next year. Mojave’s thermal storage is just one way to serve solar power at night, along with Snohomish PUD’s new 1-megawatt grid-connected battery, and this stand-alone solar- and wind-powered street light.

Clearing the road for drivers to embrace EVs

Electric vehicles got a push last week from BMW and Volkswagen, which are partnering to build a network of fast-charge stations for electric vehicles on the East and West coasts. The stations are aimed at reducing drivers’ “range anxiety” by enabling them to juice up in just 20 minutes. While more convenient charging is one of five strategies proposed by California’s Green Power Institute, another factor is harder to control: consumers’ drift away from EVs due to the declining price of gasoline. In the freight business, a company billing itself as “Uber for trucks” is matching truckers more efficiently with loads, cutting down on truckers’ mileage driving empty.

A tale of two cities adapting to rising waters

A Copenhagen neighborhood is being re-engineered with swales and rooftop gardens to accommodate climate change’s rising waters and avoid a repeat of the $1 billion flood that followed a 2011 cloudburst, a microcosm of a challenge touching people worldwide. Across the Atlantic in low-lying Miami, a waterfront boom continues unabated by concerns about sea level, where Dutch experts are designing floating neighborhoods, and civil engineers are making plans to raise roads and seawalls. But with flood insurance already costing some homeowners more than their mortgages, some observers foresee a pop to the bubble: if homes become uninsurable, real estate values will nose-dive.

The Bulletin of the Atomic Scientists last week inched the hands on its doomsday clock two minutes closer to midnight, to 11:57, because of dangers from climate change and nuclear proliferation. The U.S. Northeast braced itself Monday for a blizzard of “potentially historic proportions”—a phenomenon made more likely by the warmer sea surface off the Atlantic coast, according to climatologists. A new study found that losses to the Antarctic ice sheet were offset somewhat by heavy snows in 2009 and 2011. California, meanwhile, was enduring the opposite problem, as the rains which eased its epic drought have abated, leading to the driest January in San Francisco’s 165-year record.

Senate postures while the world warms

President Obama kicked off a short work week in Washington with his State of the Union address, in which he mocked Republicans who disclaim scientific knowledge on the climate issue, called for America to lead on climate action, and omitted his previous support of an “all of the above” energy policy, which gave equal weight to fossil fuels and renewables. At the other end of Pennsylvania Avenue, the Senate debated the Keystone pipeline and agreed overwhelmingly that the climate is changing (wondrous!). With only a few Republican votes in favor, it refused to tag human activities as the cause—but it still got senators on the record ahead of the next election.

What’s so funny about climate change?

The British RSA brought seven comedians on stage last week to help launch its rather more serious report on the Seven Dimensions of Climate Change, with most leaning on gallows humor to treat a colossal problem in a funny way. Readers can make their own judgments about whether the comics succeeded by watching an on-line replay; those in the Seattle area can see “stand-up economist” Yoram Bauman’s effort at climate humor Wednesday night as part of a church-sponsored week of events about climate issues.

On the Climate Solutions blog: Gregg Small describes the outlook for climate and clean energy progress in Washington and Oregon in 2015; Ben Serrurier calls out a Washington State senator for cynically grouping the state’s public universities with multi-national fossil fuel corporations as major carbon polluters; and Bobby Hayden writes about an Oregon community college that trains a new generation of mechanics in clean-fuels technology, after 40 years of teaching just about standard gas and diesel vehicles.