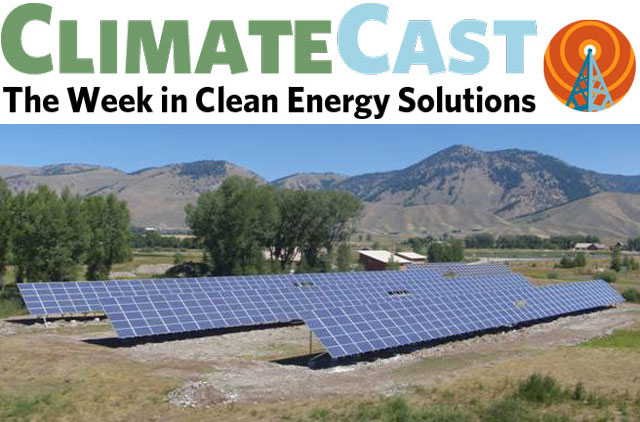 As wind and solar power gain larger footholds in the U.S. heartland, they’ve attracted a political constituency that shields them from attempts to roll back policies that favor renewable energy. Conservative lobbying group American Legislative Exchange Council has faced unexpected resistance to its proposals—backed by the Koch brothers—that home power generators pay an extra fee to connect to the grid. Green power advocates have made common cause with Tea Party groups, because they are undercutting the utilities’ monopoly power—a result that appeals to the rugged individualist side of the political spectrum.

A climate denier changes his stripes

The Showtime series Years of Living Dangerously won praise for examining climate change in a more inviting way than previous documentaries on the topic. It stirred the climate pot this week with a segment showing New York Republican congressman Michael Grimm, whose district was hit hard by Hurricane Sandy, switch from denying climate change to accepting climate science. Even so, Grimm portrayed himself as caught in the political gridlock on Capitol Hill, where he believes action is unlikely. He’s also entangled in legal troubles, having been  indicted Monday for business irregularities before he ran for office.

Indiana now boasts the nation’s largest solar farm (36,000 panels) built on a Superfund site, one of 85 renewable energy projects that the EPA has helped install on former mining sites, landfills, and toxic land. Together, the brownfields renewable projects produce 507 megawatts of power. Meanwhile, the California Energy Commission terminated the application process for a controversial and now-bankrupt 250-megawatt solar farm on 4,000 acres of public lands in the western Mojave Desert, thus saving the habitat for the rare Mojave squirrel, 40 threatened desert tortoises, as well as the burrowing owl and desert kit fox.

Industrialized countries’ greenhouse gas emissions fell modestly in 2012, according to a tally released last week by the United Nations. Europe’s climate pollution dropped 1.3 percent, with increases from coal-fired power in Britain and Germany balancing declines in nations still in the throes of recession. Emissions were up in Russia, Japan, and Australia, but fell in the Canada and the United States. Rich countries’ emissions have fallen 10 percent since the benchmark year of 1990—but if industrial emissions were counted against the consuming country instead of the place of manufacture, the richer nations’ emissions would have increased by 6 percent since 1990.

Oregon Gov. John Kitzhaber signaled his opposition to the proposed coal-export dock on the Oregon side of the Columbia River in a speech last week to the League of Conservation Voters. Although he asserted that the state has to grant the necessary permits if the project satisfies the law, he noted that the project sponsor has been given numerous extensions and “has been unable to demonstrate” that “its proposal will meet Oregon’s regulatory standards.” It’s time “to call the question,” Kitzhaber said, and he predicted a decision by the end of May.

The Oregon Institute of Technology became the first U.S. college to generate all its electricity from on-site renewable sources. Although it has long used geothermal energy for heating, it retooled to generate electricity with subterranean hot water, and added a solar array to attain energy self-sufficiency. Four hundred miles to the north, the Bullitt Foundation announced that its new Seattle headquarters’ rooftop panels generated 70 percent more electricity than the building used during its first year of operation. Called the “greenest commercial building in the world,” the Bullitt Center uses 75% less electricity than Seattle codes require, and is on track to become the first urban mid-rise commercial building to meet the stringent Living Building Challenge.

Implementing – and funding – public transit trickier than it looks

A top-notch urban transportation system requires a blend of both "carrots" and “sticks,” according to the former head of transportation for Chicago and Washington, D.C.—incentives and services to make alternatives to driving attractive, and policies, such as parking and congestion pricing, that discourage driving. The concept appears elusive for King County in the wake of Proposition 1's defeat, which signals a 17 percent cut to bus service, including the demise of 70 routes, in the fall.  A transit advocacy group reportedly plans to ask Seattle voters to go it alone with a Seattle-only property tax initiative to support transit lines that operate predominantly in Seattle.

A federal carbon tax bill in the U.S. Senate attracted a surprising amount of lobbying interest in the first quarter of the year, according to a Bloomberg News review of lobbying reports. The bill—introduced last year by Sens. Barbara Boxer (D-CA) and Bernie Sanders (I-VT)—would levy a $20-per-ton carbon fee on coal, oil, and gas producers, doubling gradually over 12 years. With legislative action nevertheless seeming unlikely, President Obama’s dreams of leaving a climate legacy by using his executive powers look to be more important than ever.