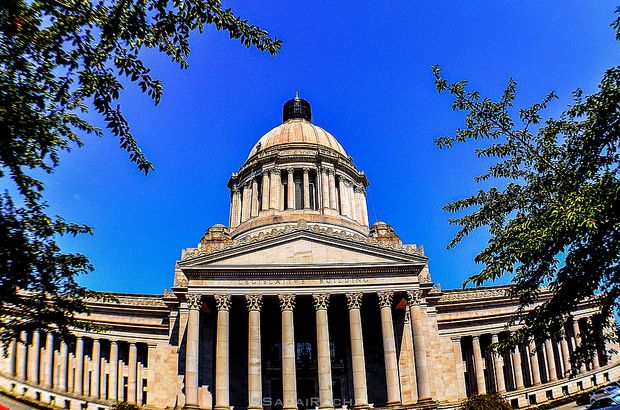 The 2015 Washington State Legislature gets underway in Olympia, and local officials across Washington are ready.

Last month, 37 city and county leaders sent a clear statement of support for bold climate action embracing Governor Jay Inslee’s climate initiatives. Naming climate change “the great generational challenge of our time,” the local electeds called for limits and a price on carbon pollution; a commitment to protect vulnerable communities from impacts of climate change and related policies; and investments in carbon-reducing solutions.

This New Energy Cities’ overview of climate and clean energy legislation emphasizes the proposals most relevant for local government engagement. (Also check out an overview of Climate Solutions’ overall priorities.)

Governor Inslee has introduced the Carbon Pollution Accountability Act to create a new market-based program limiting carbon pollution that requires major polluters to pay for their emissions and mitigates economic impacts to disadvantaged communities. Estimated to generate approximately $1 billion annually, the proceeds would be used for transportation, education, and disadvantaged communities. The House Environment Committee will hold a hearing on the draft legislation at 1:30 p.m. on Tuesday, January 27, 2015 in the John L. O’Brien Building.

The only clear prediction for public transit in the 2015 legislative session is that it will be a hot topic. The Governor’s proposal for carbon pollution pricing includes revenue for transportation (see the proposed package), giving local governments a reason to participate actively in the legislative debate.

Electrified transportation is perhaps the area most likely to gain bipartisan support, and will benefit in 2015 from the presence of a new Electric Vehicle (EV) Caucus. Building on the Washington State Electric Vehicle Action Plan, the Governor’s priorities include:

Relatedly, but outside of the legislative session, local governments should keep an eye on: the Governor’s statewide clean fuels standard proposal; potential development of EV-ready building code language; and an alternative fuel rule that will require public fleets to use 100% electricity or biofuels, to the extent practicable, by June 1, 2018.

The Energy Efficiency Roundtable, a group of energy efficiency and green building stakeholders from across Washington State that convened in summer 2014, identified four state legislative and priority policies to push this year, which generally mirror those of the Washington State Department of Commerce:

Outside of the legislative session, the Washington State Building Code Council is working on a code pathway that will achieve the state law that requires a 70 percent reduction in new building energy use (based on 2006 levels) by 2031, which effectively moves toward a net zero energy-ready building standard.

New Energy Cities will also be closely following proposals to develop Washington’s renewable energy economy, including but not limited to:

How Can Cities Engage in Olympia?

Local elected officials interested in advancing the climate and clean energy agenda in the Washington Legislature can take the following four actions:

It will be a busy and exciting session for climate leaders, and local officials will have ample opportunity to make a meaningful contribution.  If you have any questions about the session, or would like to engage more deeply, please feel free to contact us.

Here’s to success with climate and clean energy in the Washington State 2015 Legislature.