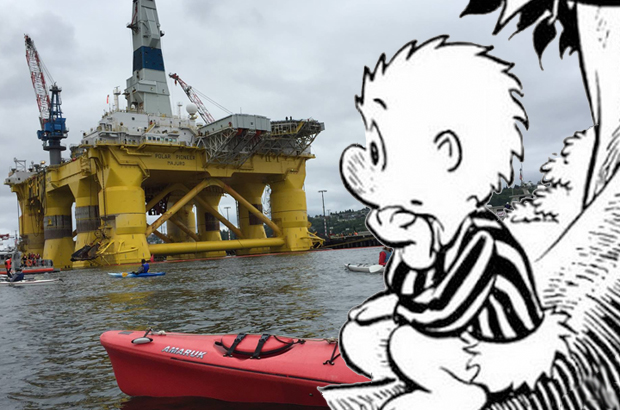 “…I remember thinking how ironic it was when Greenpeace started using gasoline-powered boats to block oil tankers, or when people drove to protests against oil drilling…”
- Interior Secretary and former petroleum engineer Sally Jewell

“We all use oil…”
- Western States Petroleum Association representative Frank Holmes, responding to questions about the dramatic increase in catastrophic explosions from oil trains

Hypocrisy. Complicity. Shame. These are some of the most potent weapons in the arsenal of futility.  Big Oil’s best friend is our own ambivalence as oil consumers.  Our guilt is Shell’s license to toast us. We can revoke that license.

We all get the point, right? We buy and burn fossil fuels. We use them to heat our homes and chill our beer and get our decreasingly skinny butts from point A to point B. Rich folks get on planes for a meeting or a weekend vacation at the drop of a hat, and poor folks drive the gas-guzzling clunkers they can afford. We even protest the Polar Pioneer in kayaks made of petroleum. Just by living our lives, we feed the beast. So how can we ever slay it? As long as we enable it, who are we to even name or challenge it?

On Earth Day 1971, the cartoon character Pogo offered up a catchphrase for modern environmentalism that threatens to become its Achilles Heel: “We have met the enemy, and he is us.” OSU philosophy professor Kathleen Dean Moore, um, begs to differ:

Bullshit. I didn’t cut corners and cause an oil spill in the Gulf of Mexico. I didn’t do my best to undermine the Environmental Protection Agency and every other agency that might have limited fracking. I’m not lobbying Congress to open oil drilling in the Arctic Ocean. I didn’t cut funding for alternative energy sources. Big Oil is pouring billions of dollars into shaping government policies and consumer preferences.  And what do we say? ‘Oh, I should be a more mindful consumer.’ Of course we should, but that’s only the beginning. We also need to hold government and corporations accountable. What are we waiting for?

She goes on to modernize Pogo, “We have met the enemy, and I’m going to do everything I can to make sure it isn’t me. But while Big Oil is externalizing all its other costs on me, I will not allow Big Oil to externalize the moral shame of its attack on the Earth.”

Yes, we are all responsible for ending the climate crisis. We all participate in the energy economy that creates it. But we are not all perpetrating it.  Most of us would choose clean affordable alternatives to fossil fuels for energy and transportation, but many of us can’t because the fossil fuel industry systematically thwarts them. Most of us would choose a responsible climate policy and an orderly transition to a clean energy economy. There are no insurmountable technical or economic obstacles to this transition. But we don’t have that choice because the fossil fuel industry has funded a relentless campaign of climate denial and purchased political outcomes that forestall progress. Most of would choose rational, science-based limits on climate pollution, but we can’t have them; instead, the chair of the relevant committee in the United States Senate is chaired by a guy who actually brings snowballs to the Senate floor in defense of climate denial.

Feeling guilty or conflicted about our fossil fuel use gets us precisely nowhere – precisely, that is, where Big Oil needs us to stay.  They can only cling to political and economic power as long as we are willing to deflect accountability from them to us. Sure, we should all be part of the solution as consumers. But to give ourselves that opportunity, we have to take back our power as citizens. We have to wage and win a clean energy revolution. And we have to stop them from driving the bus over the cliff with climate-destroying investments like Arctic drilling.

Naomi Oreskes, author of the definitive history of the climate science denial campaign Merchants of Doubt, nails the case in an interview with Wen Stephenson in The Nation:

Of course we [all use fossil fuels], and people in the North wore clothes made of cotton picked by slaves. But that did not make them hypocrites when they joined the abolition movement. It just meant that they were also part of the slave economy, and they knew it. That is why they acted to change the system, not just their clothes.

By all means, let’s find ways within our reach to reduce our oil consumption. But let’s also get real: We are not going to save ourselves from climate chaos by gnashing our teeth about our own complicity or calling protestors hypocrites. That’s just letting Shell walk all over us and get away with torching the future.  If you prefer to focus on personal responsibility, think of the Polar Pioneer as an avatar for our own wastefulness and consumerism. Whatever makes you mad enough, determined enough, unambivalent enough to actually stand up and stop them before they wreck everything – feel that.

Let’s forgive ourselves for being part of the only system there is. But let’s change the damned system so we can do what we know is right, necessary, and possible: make the transition from fossil fuels to a clean energy economy. We don’t have to do it overnight. We don’t have to forsake all fossil fuel use and the jobs that depend on it. We just have to keep moving in the right direction, and stop the fossil fuel industry from digging the hole so deep we can’t get out.  If we fail to do that, there will be ample opportunity to feel guilty down the road.