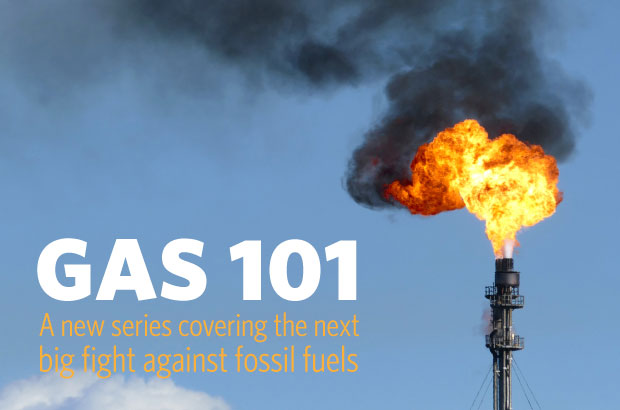 What would you do if you had a product that you wanted folks to use inside their homes and in their daily lives but it wasn’t safe or good for them?  If you’re the gas industry, you’d put the label “natural” on it to make it sound a lot less harmful and a lot more appealing and safe.

Over the last several decades, the fossil fuel industry has engaged in an epic greenwashing campaign that has escalated as concern over climate change has grown. The branding of methane as “natural gas” has been one of their most successful and destructive tactics.

The term “natural” is often used as a branding technique to communicate to the consumer that a product is healthy or environmentally friendly - think of “all-natural” foods, supplements, and cleaning products. While “natural” means coming from nature, the word also implies something that is good for you, something that is safe and clean.

Turns out the Food and Drug Administration doesn’t regulate the term on food and we don’t regulate it for our energy sources either. What does that mean? Anyone can use the word and not get fined or be accused of false advertising. Despite this, it has been proven to be an effective marketing technique. By referring to gas as “natural,” the fossil fuel industry has managed to convince large swaths of the public that their product is innocuous, benign, safe to burn in the home, and even good for the planet.

Many utilities have converted from coal and oil to gas, claiming it to be a necessary “bridge fuel,” a lower-carbon alternative before we switch over to renewable energy sources entirely. But “natural” gas is none of the things the utilities and fossil fuel companies have claimed. In reality, gas is not good for you. It’s really methane, an incredibly harmful greenhouse gas.

It’s a bridge to more burning: gas-based power plants have a lifetime of 20-30 years. By converting to methane rather than making the transition to clean energy such as wind and solar, states are locking us into decades more greenhouse gas emissions, and thus even more extreme temperatures.

It’s an energy source that takes a ton of energy to even get it: Not only is methane gas more potent, but it's also inefficient to extract and transport. The most common method of extraction is hydraulic fracturing, or "fracking." Fracking involves pumping water and other fluids into the earth, and can cause earthquakes as well as water pollution and environmental degradation. Fracking is dangerous for the health and safety of nearby residents and workers, including discharging chemicals into the local water supply and releasing dangerous air pollutants, both of which are associated with cancer, heart and lung diseases, developmental disorders, and poor pregnancy outcomes.

BIPOC communities are impacted even more than others: fracking sites are also disproportionately located on tribal land or land surrounded by Black, Indigenous and communities of color and low-income neighborhoods. Worse, we forget that the poor conditions and lax regulation at the temporary labor camps created to house fossil fuel workers at fracked gas facilities, also known as “man camps”, cause violence and harm to local indigenous communities  - so much so that Canada’s National Inquiry on Missing and Murdered Indigenous Women and Girls identified the labor camps as a source of kidnaping, sexual assault, and sex trafficking of indigenous women, girls, and Two-Spirit people.

Transport is leaky and messy:  Once it is extracted through fracking, the fossil gas is transported via pipes, which are often not airtight and therefore prone to leaks. These leaks can release up to 3.7% of what is pumped out of the ground, causing further carbon and water pollution. Running flammable gas through highly pressurized pipelines also creates risks of fires and explosions. And once again, gas transmission pipelines tend to run through indigenous and tribal lands, furthering environmental injustices when there are leaks and accidents.

Are there other sources that are not so bad? There are sources of methane gas other than fracking, including that which comes from landfills and can be captured, which is referred to as renewable natural gas (RNG). This source is substantially less problematic, as the methane is already in the carbon cycle and is being burned into the less potent carbon dioxide. However, RNG is not and cannot be the solution to all of our current problems with methane gas. It is expensive to produce and transport, and the amount of RNG currently available could only replace a small amount of current methane gas use. So where does RNG fit? We can use it in sectors that are immediately hard to electrify, such as certain industries and heavy freight, but there’s not enough of it to be used as a replacement for gas everywhere. And no matter what you call it, fossil gas, methane gas, fracked gas—it's clear that it's not natural to burn it as it's not good for our lungs or our climate.

Despite these issues, the gas industry continues to greenwash both methane gas and RNG - and utilities have played a major role in these efforts, which we’re seeing here in the Pacific Northwest. Groups like the Partnership for Energy Progress NW and the Affordable Energy Coalition are backed by the gas industry and its workers. Much of their messaging focuses around the affordability of gas, including the argument that phasing methane gas out of existing buildings and banning it in new buildings would cause an undue burden on the consumer. In fact, electric heat pump technology is both more efficient and can save money for homeowners and tenants, as well as providing crucial air conditioning as we see higher summer temperatures and more wildfires along the West Coast.

Gas utilities are also pivoting to RNG as a way to “decarbonize”, but they are in fact making promises they can’t keep with respect to RNG. One Oregon utility, Northwest Natural, ran an ad campaign in favor of using renewable natural gas to power homes, but misled consumers by implying that was already the source of methane gas being used, rather than being a future idea. Similarly, the Partnership for Energy Progress Northwest paid $91,000 for an ad campaign on the side of King County Metro Transit buses, which was then taken down after an outcry from five environmental groups.

So what should you call methane gas? Well, for starters, let’s drop the “natural.” If you think it’s a leap too far for someone to know you’re not talking about gasoline when you say gas, you could try “so-called natural gas.”

There’s growing research on better terms to use instead of natural gas, but it’s also important to remember your audience when choosing other descriptors like fracked gas, fossil  gas or methane gas.  Any of those terms speak more accurately to what it is (though note not all fossil gas is fracked, it’s often mixed together so hard to know for sure).

Liked what you learned?  We don’t have the big advertising budget like the gas industry, so it takes folks like you sharing this information with others in your network to help debunk the greenwashing and misinformation.  Help counter the gas industry and share this today.

Deepa Sivarajan is the Washington Policy Manager. Check out her full bio here.

Hey, kids, fracked gas is good for you
Turns out it’s a bad idea to burn fossil fuels inside our buildings too
The case for clean, safe, and all-electric buildings