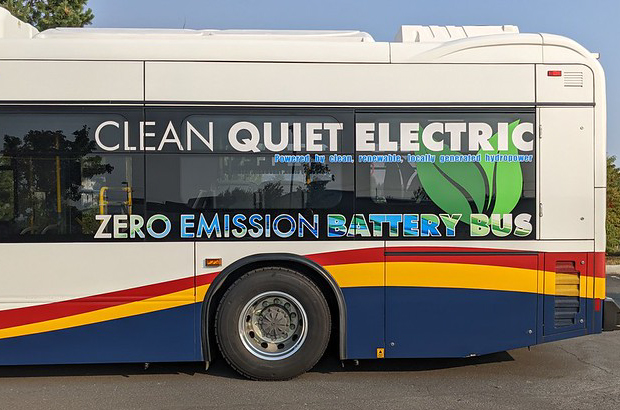 Check out photos from the event and video footage coming soon!

Link Transit demonstrated its battery electric transit bus (manufactured by BYD), taking event attendees on a ride to its wireless induction charging station, which is the first of its kind in the world. Link Transit has ten 35-foot and two 30-foot BYD buses in its fleet, with more on order as they fully convert their fleet. These buses can travel up to 200 miles on a single charge. CEO Richard DeRock emphasized the cost-savings these buses provide: they cost about 45 cents per mile to operate, whereas diesel buses cost over $1.40 per mile. Ed Archer, Link Transit’s Maintenance Manager, spoke about how electric buses provide more budget security. Unlike gas and diesel prices, which fluctuate wildly, electricity prices are stable, meaning he is able to accurately project his fuel budget for the electric fleet.

Mack Trucks’ battery electric garbage truck, which can do up to 100 on-the-job miles in a charge (covering the majority of refuse collection routes), was also on display. Typical refuse trucks get 2-3 miles per gallon, which means they spew a lot of pollution as they do their runs through our neighborhoods. Electric garbage trucks eliminate this, while utilizing regenerative braking for their stop-start travel.

Navistar’s IC electric school bus was available for attendees to check out. When repositioning the bus for display, a driver unfamiliar with the vehicle exclaimed, “No kidding! You can’t even hear anything!” For school bus drivers and kids, the lack of engine noise makes the ride less stressful and safer. Electric school buses are spurring so much interest that the EPA recently doubled its available funding for electric school buses to close to $1 billion, with further rounds of funding on the horizon.

A hydrogen fuel cell semi truck, manufactured locally in Renton, WA under a partnership between Kenworth/PACCAR and Toyota, was also on display. Kenworth/PACCAR builds these trucks as well as battery electric semi trucks and box trucks at their Renton plant. To complement the vehicle displays, OneH2 showed off their hydrogen refueling trailer. The company is working with Douglas County PUD to generate clean, electrolytic hydrogen from the utility’s clean electricity. Electrolytic hydrogen fuel cell vehicles appear to be well-suited for heavy-duty and longer hauls in particular and may complement battery electric vehicles as the zero-emission transition unfolds in the transportation sector. In addition to these larger vehicles on display, the local Ford dealer (Pat Armstrong Ford) brought Ford’s battery electric F-150 Lightning, which is in very high demand. The Ford F-150 is consistently one of the top-selling passenger vehicles in the United States, so switching over to a clean version is critical.

Greenhouse gas emissions from diesel have more than doubled since 1990. Meanwhile, diesel is responsible for 70% of the cancer risk from airborne pollutants in Washington. Transitioning to a zero-emission vehicle fleet for all vehicles, big and small, is the path forward to protect our health, reduce our dependence on gas and diesel and their widely-fluctuating prices, and to meet our climate goals.

There are more clean transportation events happening throughout the state to showcase the possibilities in this sector. We’ll be down in Des Moines, WA this Friday to take a peep at the Volvo electric semi and revisit the Mack electric garbage truck!

Getting off oil to get around WA
Do we really need to electrify all those vehicles? Yes—and quickly