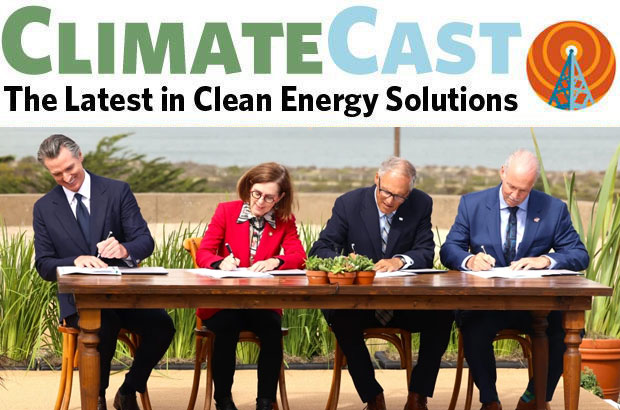 Sign us up for renewable power
Jonathan Lawson
October 14, 2022

Northwest states have committed to transition timelines shifting from fossil fuels to renewable energy. One significant, though perhaps underappreciated, challenge to achieving our goals is building the infrastructure to get new clean energy to customers. Emily Moore (Sightline) appraises this problem in detail, and concludes that “Hundreds of renewable energy projects are ready and waiting, but without a bigger grid, they will never get built.” The responsibility for managing electrical grid concerns is complicated, with nearly all transmission dependent on federally-owned power lines overseen by the Federal Energy Regulatory Commission (FERC); power lines run across multiple jurisdictions, complicating new projects. Many are concerned that FERC isn’t acting fast enough to make infrastructure improvements such as strengthening interregional connections.

It is widely understood that congressional action will be needed to address these infrastructure hurdles. Although Senator Joe Manchin’s energy infrastructure-related bill failed last month in part because it would have made it easier to build Appalachian gas pipelines, some kind of permitting reform will be needed to speed up clean energy deployment. In the New York Times  last week, David Wallace-Wells called for progressives to “rally around a clean energy construction boom” including permitting reform which, even if it made it easier to build some fossil fuel projects, would do far more for clean energy expansion, and thus accelerate the transition to clean energy.

On a more local scale, funds made available through the Inflation Reduction Act (IRA) will make it easier for homeowners and small businesses to make clean energy upgrades; challenges there can include finding qualified installers to do the work. In order to encourage more rooftop solar installations, California just passed a law granting instant permits for homeowners hoping to go solar.

Coastal communities in hurricane Ian’s path were no match for the storm surge reducing many homes and buildings to wet wreckage. In the storm’s aftermath, one key safety net—property insurance—is showing signs of buckling, as overburdened insurers are forced to raise rates past the point of affordability for many. In Ian’s wake, privately insured losses alone are expected to reach $67 billion, to say nothing of the human cost as displaced residents are confronted with difficult decisions whether to try to remain and rebuild, or to move on.

The Florida community of Babcock Ranch weathered Ian’s winds and waters much better than many of its neighbors. Powered by its own 870-acre solar array, the planned town was designed with hurricane resilience in mind; its power lines run underground and its neighborhoods are protected by retaining ponds and roads designed to direct flood waters away from homes. And Babcock Ranch is located 30 miles inland to avoid coastal storm surges.

A number of coastal geologists and climate scientists are preaching a message which is increasingly hard to ignore: that the only sensible solution for many coastal communities facing certain sea level rise is to relocate rather than rebuild. According to marine geologist Orrin Pilkey, who has written books on the subject, such communities will ultimately have to retreat 1000-2000 feet away from the coast for every foot of anticipated sea level rise. The cost of relocating entire communities (or “managed retreat”) has kept most policymakers from seriously considering such options (despite the likelihood that doing nothing will wind up being more costly). Additionally, when populations are disrupted in the name of disaster preparedness, it is often low income communities and people of color who bear a disproportionate burden. Urban planners will be faced with the imperative to consider social justice as well as climate catastrophes as they make hard choices.

Note: it isn’t only southeast coastal communities that are having to make hard choices due to climate change. The Vancouver Sun documents the experiences of several inland native communities damaged by wildfire, who are also facing choices whether to relocate-or-rebuild.

It’s become almost a regional truism that West Coast states lead on climate. But there’s always more that needs to be done. Last week, the governors of California, Oregon and Washington joined with the Premier of British Columbia to sign a new climate pact committing to further increase renewable energy, to boost electric vehicles and to prevent forest protection. “This is not about electric power, this is about economic power,” Governor Newsom said, framing the agreement as a solution for long-term economic resiliency as well as climate stability.

Washington’s Department of Ecology last week released a final rule that will steer the January rollout of the state’s second-in-the-nation cap-and-trade law. Washington is also on the verge of having the cleanest homes in the nation, as the State Building Code Council considers creating fossil-free heating and cooling requirements for new home construction, extending rules recently enacted for commercial and large residential buildings.

Not to be outdone, California is moving forward with a plan to end the sale of gas heating appliances for all buildings by the year 2030.

The dawning of a new IRA

In late September, the bank Credit Suisse released a little-noticed and staggering analysis of the bigger than realized benefits coming from the Inflation Reduction Act. Analysts noted that uncapped tax credits potentially mean double the federal investments originally calculated, and also projected the U.S. to soon be the largest energy producer given the clean energy boost. Plus a shift of corporate mindsets towards the opportunity of clean energy (took ‘em long enough!) could create massive new job growth.

The energy storage industry will get a new and never-before-boost from the expanded investment tax credit (ITC). Until now, storage facilities had to connect to a solar project instead of being standalone to qualify for the tax credit. Now, not only is there a longer than ever before extended term of 10 years for the ITC overall (huge!), but also credit for standalone and solar-plus storage projects - critical for many communities’ resiliency. Rural electric co-ops, municipalities and other nonprofits will also be able to get payments for the first time for investing or producing zero-carbon renewable power–receiving “direct-pay” provisions and be able to compete with private energy developers; rural electric co-ops will also be able to get new federal grants and forgivable loans.

Oregon's gaps in EV charging infrastructure were highlighted in a recent OPB story, relief from which is coming in the form of state and federal investments. Up north, Climate Solutions' Leah Missik was interviewed for PBS on what's next for zero-emissions vehicles in Washington. A recently released study by Bloomberg News confirms that the transition to electric vehicles will increase demand on our nation's energy grid, but well within our capabilities to retrofit and expand. Finally, corporate giant General Electric has announced that they are joining the lucrative microgrid market, connecting smart home microgrids to EVs as massive energy storage devices.

One Thing You Can Do:

State regulators in both Oregon and Washington are considering proposals to help reduce tailpipe pollution and require more zero-emission car sales with a goal that 100% of new cars sold be pollution free by 2035. Transportation emissions are the biggest source of climate pollution in both states, and a major cause of health problems. Find out more about each state’s proposed rule updates, and encourage your state officials to do everything they can for our climate and our health. Oregonians click here; Washingtonians here. Not in Oregon or Washington? Please send this action to someone you know who does live there—the oil industry is ramping up their resistance!