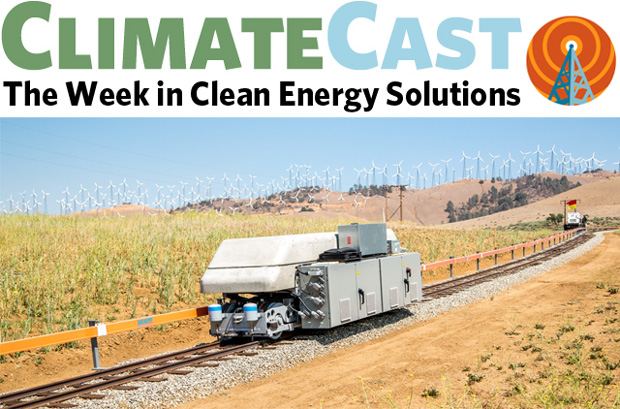 Representatives of 175 countries gathered at UN headquarters in New York Friday to ink last December’s climate agreement in the largest simultaneous treaty-signing in history. The ceremony marks the penultimate step before the treaty goes into effect, which will occur when at least 55 countries responsible for 55 percent of annual climate pollution have ratified it—progress toward which is tracked here; 34 countries with 49 percent of emissions between them have either ratified or pledged to do so this year. China and the US are pushing for speedy ratification, in part because the next US president would then be unable to formally withdraw for four years, offering insurance against the election of a climate-unfriendly candidate.

The US Senate passed a bipartisan energy bill last week that raises energy efficiency standards, requires grid upgrades to accommodate renewable energy, and funds research into tidal energy and carbon capture. The sausage-making that produced the bill also streamlines the approval of natural-gas export facilities and decrees that biomass energy be considered carbon-neutral, two provisions that drew fire from environmental groups. The bill now goes to conference with the House, which passed a version last fall that would hinder energy codes and make it easier to build pipelines through national parks. In a separate vote earlier this month, the Senate refused to extend tax credits on geothermal energy, fuel cells, and small wind power.

The World Bank and International Monetary Fund are using their influence to promote carbon pricing around the world, reports The New York Times. The bank is funding 18 countries to develop their carbon pricing mechanisms, out of 90 nations whose climate pledges included a carbon price, while the IMF urges countries to adopt carbon taxes if they need to cut deficits. In Washington, the Alliance for Jobs and Clean Energy floated a proposal to cap and price carbon, while reinvesting the proceeds in renewable energy and a just transition; in Minnesota, a judge urged utility planners to calculate the cost-benefit of different energy sources using a cost of carbon in the range of $11 to $57 instead of under $5 per ton. Carbon pricing is just one useful tool among many, David Roberts concludes in Vox.

Better or faster? The clean energy debate rages on

Are breakthrough innovations needed to meet the world’s climate targets, or is it enough for existing technologies to be deployed more quickly? This argument broke out again last week when an article in Foreign Affairs took the former position, provoking a strident critique from climate expert Joe Romm. Though it’s hard to argue that better technologies wouldn’t be helpful, Romm took issue with the suggestion that renewables aren’t delivering great results—and deplored the lead times before a fundamentally new technology could be deployed at scale. Simultaneously, Harvard prof David Keith admitted he’d underestimated how quickly photovoltaics would become cost-competitive, and laid out the implications of cheap solar, such as a blossoming of aluminum and ammonia manufacturing in the Southwest.

How can solar hold its value in the noonday sun?

The wholesale price of solar power will decline as it becomes more abundant, according to a new article in Nature Energy. The first megawatts of solar power are quite valuable because they reduce midday peak demand, but if photovoltaics grow to supply 30 percent of the grid’s energy, the wholesale value of their power could decrease by some 70 percent. As a remedy, the authors suggest bringing down the price of solar installations to a target of 25 cents per watt. Others see a different business opportunity: Defense contractor Lockheed Martin is entering the power storage business with lithium-ion and flow batteries, and a California company is building a 50-MW storage facility in which railcars will haul concrete weights uphill when power is cheap, and regenerate the power by running downhill when it’s needed.

Another fossil-fueled infrastructure project bit the dust last week in the face of public opposition, when a Chinese-backed firm pulled the plug on its $3.4 billion proposal to convert natural gas to methanol in a mammoth plant on the Tacoma waterfront. The cancellation comes just one week after developers bailed on a $6 billion plan to build a liquefied natural gas terminal near the mouth of the Columbia, along with an 87-mile pipeline to supply it. An oil terminal proposed for Vancouver, WA did get a new lease on life, however, when port commissioners granted it a seven-month extension to try to obtain the necessary permits.

An attempt to make a point nearly ended in self-immolation for an Australian member of Parliament from the Green Party, who used a lighter to demonstrate how much methane was bubbling up through the Condamine River in Queensland as a result of coal-seam gas extraction. The profanities have been bleeped out, but this cautionary video is no less instructive for the redactions.

Image: A quarter-scale demonstration project showing how gravity and rail can store energy for the electrical grid near Tehachapi, CA. Photo courtesy of Ares North America.